A meandering moose that caused a stir after running into the bushes at the Regina CBC building Thursday has been shot with a tranquillizer dart and trucked out of the city.

Same moose had suprised, delighted park-goers in city earlier in the week

A meandering moose who caused a stir after running into the bushes at the Regina CBC building's parking lot has been shot with a tranquillizer dart and trucked out of the city.

Most likely  — according to conservation officers —  it is the same moose that delighted and surprised Regina residents earlier in the week when it popped up in Wascana Lake in the centre of the city.

Hiding in the bushes

Thursday's incident started around 6:30 a.m. when the moose wandered over from the area of the Royal Saskatchewan Museum, entered the CBC parking lot and hid in the bushes.

Park workers and conservation officers converged on the area and police cordoned off the 2400 block of Broad Street, where the CBC building is located.

A conservation officer on the roof shot the moose with a dart gun.

Crews waited for the tranquillizer to take effect before shifting the unconscious ungulate onto a tarp and then lifting it onto the truck. 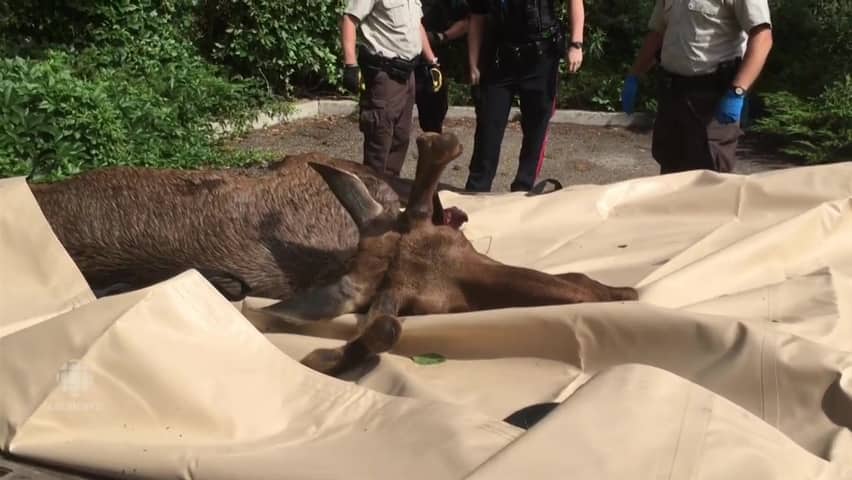 5 years ago
1:59
A moose that wandered into a parking lot at the CBC building in Regina has been removed after being tranquillized. Conservation officers have taken it out of the city on a flatbed truck. 1:59

Officials didn't say exactly where they were taking the moose but were last seen headed south on Broad Street.

Lindsey Leko, a Saskatchewan conservation officer, said officials are taking the animal outside of the city to a safe spot where it can recover.

"We don't want to put anything next to the Trans Canada highway. We want to make sure we put it in an area where it can recover from its sedation," said Leko.

And recover it did! The government of Saskatchewan confirmed that the moose was awake and standing in its new, less urban, environment.

'Most Canadian problem ever' 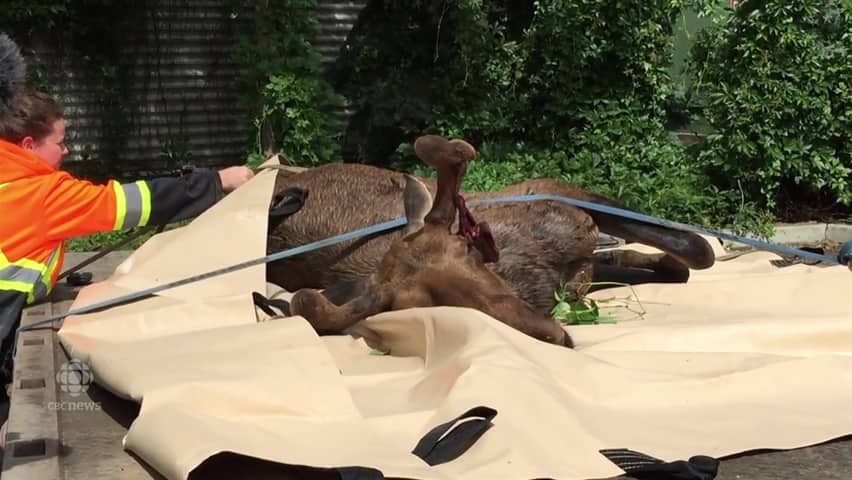 5 years ago
0:18
A meandering moose that caused a stir after running into the bushes at the Regina CBC building has been shot with a tranquillizer dart and trucked out of the city. 0:18

Park officials had asked members of the public to keep their distance — for their own safety as well as the moose's.

Officers opted to tranquillize the moose as it seemed unlikely that it would be able to leave the city, safely on its own.

"If the moose is going to move out on its own during the night hours, or something like that, that would be probably the ideal option," said Leko.

Now, the moose is out of the city and hopefully recovering from its metropolitan time.

Meanwhile, Sask. Polytech teacher Jeph Maystruck, who had earlier been a guest on CBC's The Morning Edition, had places to go — but a terrific excuse for being late.

His car was parked right beside the bush where the moose was hiding and he was warned it wasn't safe to approach.

"Most Canadian problem ever this morning," Maystruck said in a tweet.

Most Canadian problem ever this morning. A Moose is by my car at the CBC office, I'm not allowed to leave. What a time we live in!!