'Our hurt, our loss, our tears': MMIWG report an emotional milestone for Sask. Indigenous women

Indigenous women who spent years fighting for a national inquiry into the disproportionate number of missing and murdered Indigenous women and girls are travelling from across Canada to Ottawa to witness the inquiry commissioners hand over their final report and recommendations in Gatineau, Que.

It's been a "hard road" for Sen. Lillian Dyck, pushing against what she sees as resistance to changing the law to protect Indigenous women and girls.

The Saskatchewan senator welcomed the final report on Missing and Murdered Indigneous Women and Girls (MMIWG) and its stance in labelling the crisis a "genocide."

"In this case we are actually looking at the murder of Indigenous women and girls. So that to me is genocide," she said. "And sometimes you need to name things really strongly before people wake up and start to pay attention to it."

The final report will be officially released in Ottawa on Monday at the closing ceremony of the MMIWG inquiry, but CBC News obtained a copy.

The report — the culmination of two and a half years of work by the $92 million National Inquiry into Murdered and Missing Indigenous Women and Girls — makes more than 230 recommendations, including a recommendation to amend the Criminal Code to address how judges sentence people for violent offences against Indigenous women, according to Dyck.

It's in line with a bill Dyck introduced four years ago that was passed by the Senate, but failed at that time to pass through the House of Commons.

"We knew it was a good idea because in our laws, we protect dogs. We protect taxi drivers. We protect police officers and prison guards. Why can't we protect indigenous women and girls?" she said, her voice breaking as she expressed her gladness to see this need addressed in the final report.

More than a dozen Indigenous women from Saskatchewan who fought for, and took part in, the national inquiry into MMIWG are travelling to Ottawa for Monday's ceremony.

"This has derived from our hurt, our loss, our tears, our heartache," said Shirley Wilson, as she prepared for her trip.

Wilson's daughter, Wannitta Wolfe, also known as Eagle Flies over Smudge, was shot and killed in Regina in 1999.

In September 2016, the national inquiry was launched to examine the disproportionate number of missing and murdered Indigenous women and girls in Canada and how such cases are handled. The inquiry was plagued by staffing changes and complaints about its scope, funding, deadlines and family involvement.

Wilson testified before the inquiry in November 2017.

"People have a view, I believe, that we are disposable. And we are not. We matter — just like everybody else in society, right? But for many years, that hasn't been the case," she said.

Wilson said she wants to make sure the family's input is reflected in the final report, since she believes victims' families experienced trauma and pain in providing their testimony.

"Every time we go to an event and we speak about our loved one, it's like opening up a wound. And we walk away from there and it's reliving everything over and over again." 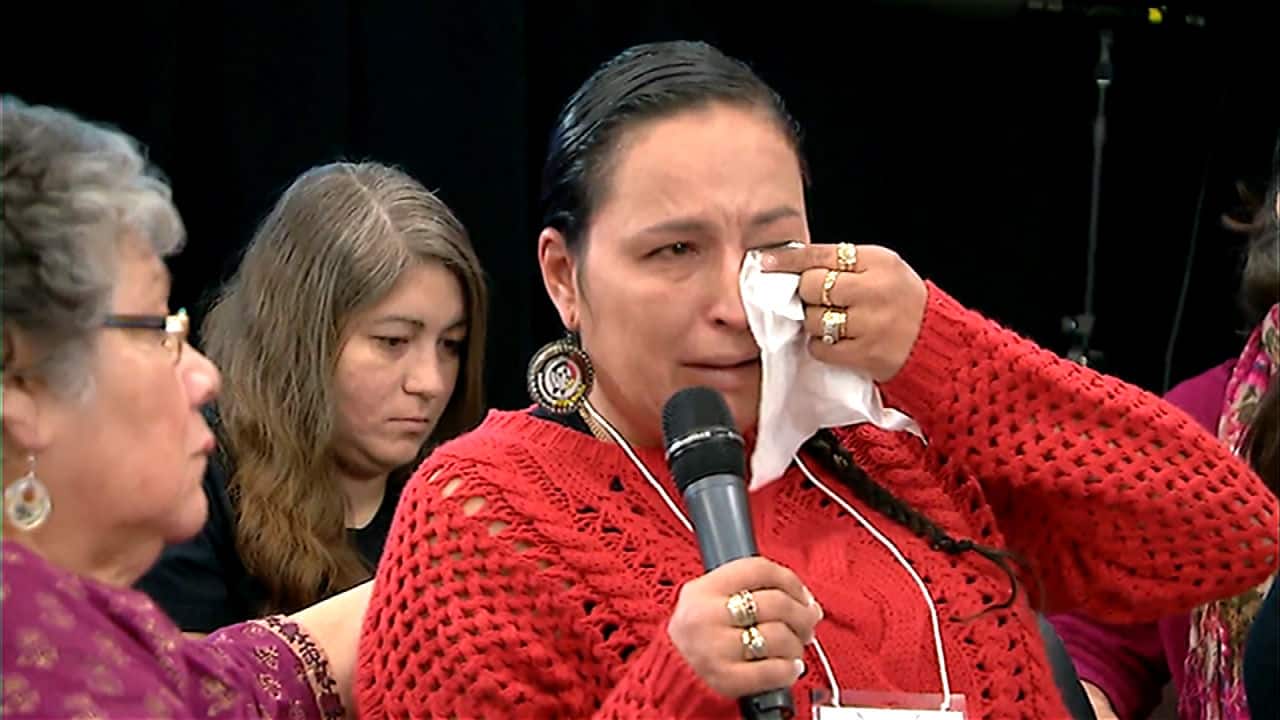 Trauma and healing: supporting families at the MMIWG national inquiry

3 years agoVideo
2:08
It's been four painful days of testimony at the National Inquiry. Dozens of families and survivors have shared their stories of loss and grief. Around 80 are expected to testify and all of them need emotional support. CBC's Jillian Taylor has more on the health resources available to families and survivors. 2:08

The report consists of more than 1,200 pages and includes more than 230 recommendations. It urges the federal, provincial and territorial governments to develop an action plan to counter violence against Indigenous women and girls and 2SLGBTQQIA.

The recommendations include a call to change the Criminal Code to treat cases of homicide where there's a pattern of intimate partner violence as first-degree murder, and for a review of the use of the "Gladue principle" in cases involving the deaths of Indigenous women and girls.

Wilson will be joined in the Ottawa area by Carol Wolfe of Saskatoon, whose daughter, Karina, was murdered in 2010.

"I'm hoping that it will bring change, change to make the people understand we all matter," Wolfe said. "It makes me mad and angry that I had to lose my daughter to bring change. It still breaks my heart daily and I feel sad. But I can pray for change."

When her daughter went missing, Wolfe said she was initially rebuffed by the Saskatoon police service. And then she had a tough time getting answers to her questions, partly because she's deaf.

Wolfe told the inquiry how that relationship changed from one of mistrust to openness and gratitude with the help of a missing persons liaison within the police service.

The Saskatoon-based support group Iskwewuk E-wichiwitochik, or Women Walking Together, is sending three women to Ottawa. They will receive advance copies of the report over the weekend and watch the closing ceremony.

Darlene Okemaysim-Sicotte, the co-chair of the support group, said their group submitted 27 recommendations to the inquiry, most of them related to police practices and racism.

Okemaysim-Sicotte said she also wants reforms to the child-welfare system and stable funding for women's shelters.

Judy Hughes, president of the Saskatchewan Aboriginal Women's Circle Corporation, is flying to Ottawa with five women from different parts of the province. She will be focused on demanding implementation and funding details.

"We don't want it to gather dust," Hughes said.

"I know that we'll all work really hard to make sure it isn't shelved and that the implementation starts at a fairly quick pace."

My eyes will not be on criticizing the shortcomings, but rather the way to move forward.- Erica Beaudin, Regina Treaty Status Indian Services

With a federal election roughly five months away, Hughes said there's plenty of time for the government to appoint an oversight body, with family participation, and to cement funding.

Hughes wants a national database of murdered and missing Indigenous women and girls that would be kept up-to-date. The Native Women's Association of Canada created a database that counted 582 cases by 2010. The RCMP's national overview tallied nearly 1,200 cases between 1980 and 2012.

Several Indigenous advocates who spoke to CBC News said they want the inquiry to result in more resources and money for community-based groups, many of which have operated for years on a volunteer-basis.

Erica Beaudin, executive director of Regina Treaty/Status Indian Services, is travelling to Ottawa with an elder and two other women. Beaudin had legal standing with the commission and could ask questions of witnesses and make arguments.

Like many, Beaudin was frustrated at times by time constraints imposed on the commission. As one example, she said it limited the voices of incarcerated Indigenous women.

On Monday, Beaudin said, she will focus on the achievements.

"My eyes will not be on criticizing the shortcomings, but rather the way to move forward."

Beaudin said she hopes "money comes down to the community [and] legit organizations" to create Indigenous-base solutions, rather than more colonial systems and bureaucracy.

For immediate emotional assistance, call 1-844-413-6649. This is a national, toll-free 24/7 crisis call line providing support for anyone who requires emotional assistance related to missing and murdered Indigenous women and girls. You can also access long-term health support services such as mental health counselling and community-based cultural services through Indigenous Services Canada.

With files from Jason Warick and Janan Whitfield