Cody Fajardo on off-season life, reality TV and how he came to love football

Cody Fajardo sat down with the CBC's Christy Climenhaga to chat about his upbringing, his love of football and how he spent the last off-season.

Cody Fajardo took over the reins of the quarterback role for the Saskatchewan Roughriders in the first game of the season.

Fajardo spent four seasons at the University of Nevada, where he played 45 games, was named Freshman of the year, earned second-team All-Mountain West honours in 2012 and passed for 9,000 yards while rushing for 3,000 yards — just the second player to do so after Colin Kaepernick.

He sat down with the CBC's Christy Climenhaga to talk about his upbringing, his love of football and what's kept him busy in the last off-season. 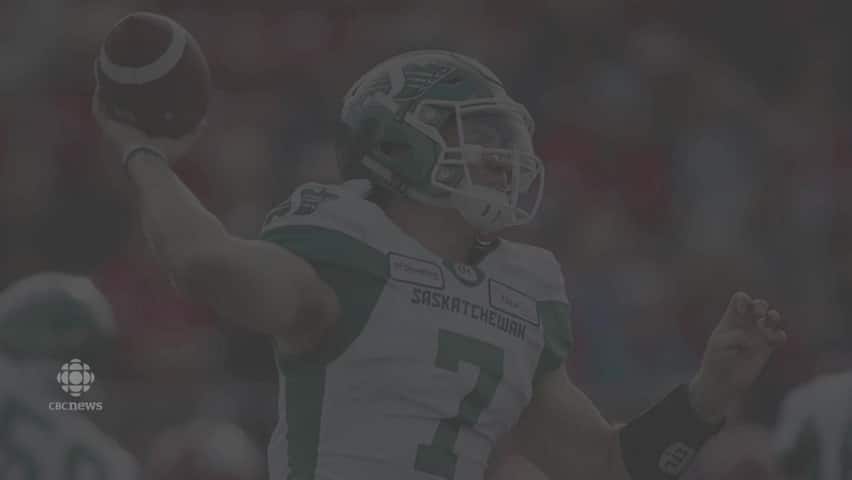 2 years agoVideo
4:21
Quarterback Cody Fajardo is front and centre in the latest edition of Meet Your Rider 4:21

Growing up around the game

"When I was a little kid, my older brother played football, and I was one of those kids who was on the sidelines, I wasn't old enough yet, I would just run down the sideline with the players, and I was super excited. I always had a football in my hand," Fajardo said.

It's a high risk, high reward job but Fajardo loves every minute of it.

"Just the fact that I got to touch the ball at every play at the quarterback position really appealed to me," he said. "When everything is going bad, it's rough being the quarterback, but that's what kind of comes with the job title."

Weddings and walking: time well spent in the off-season

In the last off-season Fajardo said he took on a side job as a dog walker.

"It's an app … if you want to walk their dog, it's usually about 30 minutes, and so it was part of a workout for me; I would try and get two miles (of walking) in 30 minutes with these dogs," Fajardo said.

It turns out, he's a pretty good dog walker — or at least, his customers think he is.

Fajardo said he has a two-year-old Golden Doodle at home who's his best friend.

He also got married in the last off-season.

"It was pretty hectic. [My wife] was absolutely amazing. I've heard of the horror stories of the bride-zillas, but she definitely was not that, she just had her few little things that she wanted, and the other things were like 'Yeah, I don't care, I don't care' and that really made my life super easy," Fajardo said.

"That day, best day of my life, best day of her life, we look back at it, always going through the pictures, always talking about it and the cool thing about your marriage and a wedding is you have everybody you love in one room."

Fajardo said his wife hasn't had the chance to check out a Roughrider game yet as she's completing part of her education at George Washington University in Washington D.C.

When Fajardo was in high school, he dabbled in the world of reality TV.

"They took eight quarterbacks and they tried to make it really drama based, and tried to say guys were talking behind your back and try to get you to say stuff on camera," Fajardo said.

"A lot of people probably don't know that about me… I absolutely hated it. I was like: this is not for me," Fajardo said.

While he might have a bitter taste in his mouth from his reality TV experience, he still has small-screen dreams.

"I've always wanted to be on a game show though, I've been watching the documentary on Netflix, it's called The Bid or something, about the guy who knows all the Price is Right things… so that's kind of my thing, is game shows."

The Saskatchewan Roughriders are set to square off against the B.C. Lions at 5 p.m. tonight.

With files from Christy Climenhaga