Lori Campbell, an adopted aboriginal woman from Regina, turned to Facebook to find her last missing brother - one of six siblings she had been trying to find since 1991.

Lori Campbell has spent more than two decades tracking down her birth mother and six younger siblings, after all were put up for adoption or placed in foster care between 1975 and 1989.

Earlier this year, the adopted Métis woman from Regina became frustrated that she couldn't find one last missing brother.

"I couldn't find out anything, like nothing," said Campbell, 42. She had her brother's name, birth date and a picture of the boy in a striped shirt. "You see, there's a little sign that says 'Welfare Services.' And that was the last family picture we had."

She turned to social media in January. Her Facebook post was shared 20,000 times, and the CBC Aboriginal story that followed eventually got results.

"It's overwhelming," Campbell said, looking back on her search. When she started, she didn't even know her birth name.

"Looking up at the sky, sometimes wondering, like, 'Does anybody know me?' Like, 'does anybody remember me? Does anybody ever think of me?'"

The 23-year search wasn't easy, and some of her findings were troubling.

Campbell's mother was sexually abused as a child and, at 13, became a prostitute on the streets of Regina. Her father was a john. Social services in Saskatchewan apprehended Campbell when she was 14 months old and she was later adopted by a white farm family.

In 1991, when Campbell was attending university in Regina, she began applying for government records.

She learned that she had six siblings, but was only told their birth dates, first names at birth, their physical and cognitive disabilities, and whether they had been adopted or put in foster care. Campbell realized that her mother's addictions had worsened over the years, and some of her younger siblings were born with physical and cognitive disabilities.

"I think that was my first sense of responsibility, that I need to find them and I can't have them not knowing that somebody knows about them," said Campbell.

In 2001, 10 years after her search began, Campbell found and met her mother, Brenda.

"I couldn't stop staring," Campbell said. "I was looking at her hands, her eyes, her ears, all these features that I had just never seen on anybody but me before."

At a coffee shop in Regina, Brenda Campbell, 57, smiles at her daughter over the table. 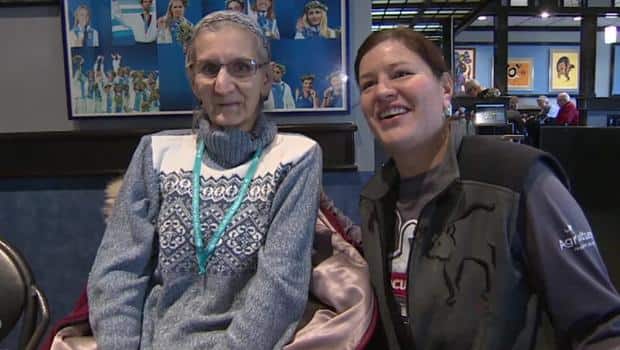 Lori Campbell and her birth mom

6 years agoVideo
1:27
Lori Campbell and her birth mom talk about their reunion 1:27

"I thought about it a lot, but in the end, I figured it was better 'cause when I was younger, I used to drink a lot."

Brenda Campbell knew the location of three children in foster care, so Lori Campbell was able to meet two of them in person. She communicated with the foster mother of the other brother, who was severely disabled.

"I just felt happy to know he was somewhere where he was cared for," said Campbell.

She found two more brothers, Lyndon and Chad, in Regina and the area through word of mouth and a little detective work.

A smile lights up her face as she describes what it was like for her, a six-foot-tall woman, to meet them.

After she put a post on Facebook in January, and her search was featured in a CBC Aboriginal article, Campbell received hundreds of messages and emails. It took countless hours to wade through them and eliminate possibilities.

She also realized that she had printed the wrong birth year on the poster.

Campbell was worried about her brother, and wondered if he might be dead. Records showed that his first adoption didn't work out, so he was adopted into a second family, then shuffled through foster homes.

In October, she got an email from Dwayne Lyons in Ontario.

Lyons told CBC News that a friend showed him the CBC Aboriginal article that mentioned Brenda Campbell, the name of his birth mother. That prompted Lyons's girlfriend at the time to search Lori Campbell's Facebook page. She found the photo of the missing brother, Wayne Robert Campbell.

My instant reaction was that it was me.- Dwayne Lyons, believed to be Lori Campbell's brother

"She said, 'Who is this?!' and showed me an old photograph of a young boy. My instant reaction was that it was me," Lyons wrote in an email to CBC News.

He also felt his name had been changed from Wayne to Dwayne when he was adopted as a young boy.

Lyons contacted Lori Campbell directly, and in that email, questioned Campbell about the birth year.

"The article mentioned that the brother she is looking for was born in 1974. My birth certificate states that I was born April 28th, 1975," explained Lyons.

The fact he corrected Campbell's mistake, without prompting, convinced Campbell that he was her brother. They haven't performed DNA testing, but further correspondence and documentation have also panned out. He was the only sibling who had been moved out of province, making the search more difficult.

The newly discovered brother and sister chat on Facebook every day and are making plans to meet each other in person.

Campbell is the only one of the children who has a relationship with Brenda Campbell, who is now HIV positive and also has multiple sclerosis.