Prime Minister Justin Trudeau fielded questions on everything from pipelines to Indigenous rights to his favourite childhood toy Thursday evening before a lively Regina crowd.

Protesters gather outside during PM's appearance at University of Regina 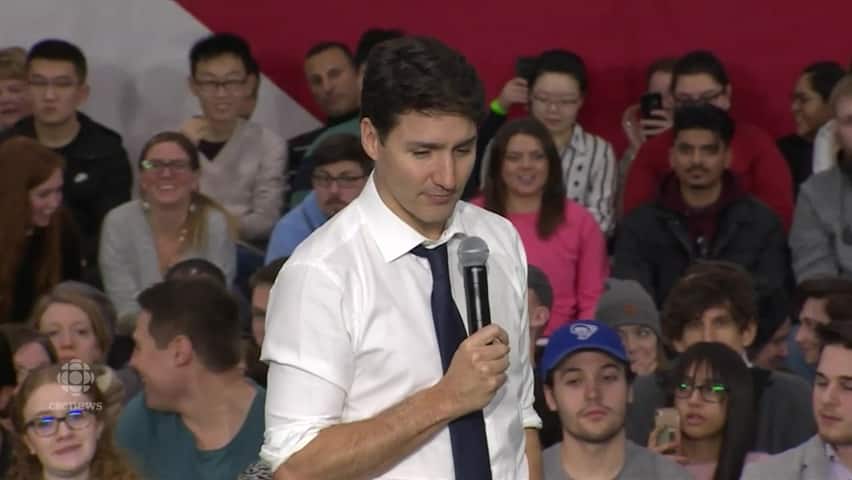 Prime Minister Justin Trudeau fielded questions on everything from pipelines to Indigenous rights to his favourite childhood toy Thursday evening before a lively Regina crowd.

There was no clear issue that dominated the event. He took about 20 questions and was asked about everything from a controversial arms deal with Saudi Arabia, immigration, deficits, support for mental health, as well as steel tariffs and the carbon tax.

Courtland Klein, 38, who works at the Evraz steel fabrication plant in Regina, asked Trudeau why his government inked a new trade deal with the United States with steel and aluminum tariffs in place.

In response, Trudeau said in every conversation he has with U.S President Donald Trump he raises the issue that "these punitive American tariffs" are hurting both Canadian and American workers.

"Yes, I would have liked to have been able to convince the president to pull back the steel and aluminum tariffs before signing," Trudeau told the crowd.

"That was not going to be possible. That was very clear from the U.S. administration," he said, adding that the choice came down to whether or not to secure the trade deal, which he said is worth $2 billion a day to the Canadian economy.

The town hall took place a day after a similar, but more raucous meeting Trudeau held in Kamloops, B.C., where he faced questions about pipelines and reconciliation with Indigenous people.

In a repeat from the previous evening's event, the question of pipelines was front and centre.

"You've got yourself in a hell of a predicament. You pissed off the Greens, you pissed off your base, you pissed off us that don't like you and the pipeline still isn't in the ground," the same questioner said during the town hall, which had more than 1,000 attendees," said Klein.

"You can legalize marijuana, but we can't twin a pipeline, an existing pipeline to the coast."

Before the town hall began, roughly a dozen protesters gathered outside the venue — the University of Regina's kinesiology building. The group included a pro-oil and gas protester and an Indigenous rights protester.

"He's giving away money to so many other people — the $10.5 million that was given to the so-called criminal [Omar Khadr] and veterans are not getting money."

As the event got underway, a convoy of trucks gathered outside.

Thursday's event was not without its interruptions, however, including when Trudeau answered questions about pipelines.

At one point a woman stood in an aisle and held a sign expressing solitary with the members of the Wet'suwet'en Nation, who earlier this week set up checkpoints on a service road in B.C. in protest of a proposed natural gas pipeline.

She asked about the actions of the government and the RCMP, which arrested 14 people.

One person in the crowd shouted, "Is that reconciliation?"

Later in the evening, Trudeau received praise from elder Noel Starblanket, seated at the front of the crowd, who said Trudeau has done more for Indigenous peoples than any other prime minister in Canada.

Thursday's crowd grew particularly animated when Trudeau fielded a question from a man who wanted to know what the prime minister is doing about border control.

At first. some audience members cheered at the question, but boos followed when during an exchange with Trudeau, the man said that Islam and Christianity don't mix and "they" want to kill "us."

Trudeau said there is no open border and defended Canada's immigration system as effective at both allowing people into the country and integrating them into society, singling out Syrian refugees.

On Friday, Trudeau is expected to make several stops around the city in the company of Ralph Goodale, the Liberals' lone MP in Saskatchewan.

-with files from The Canadian Press

Stephanie Taylor is a reporter based in Saskatchewan. Before joining CBC News in Regina, she covered municipal politics in her hometown of Winnipeg and in Halifax. Reach her at stephanie.taylor@cbc.ca