'They are amazing': Japanese man travels 8,000 km to fulfil dream of seeing buffalo in person

Masaya Ogata of Nagano, Japan, grew up thinking buffalo were extinct. Then he read Peepeekisis Cree Nation welcomed a herd home to Saskatchewan.

Masaya Ogata grew up thinking buffalo were extinct, until he read a Sask. First Nation welcomed a herd home

A love of buffalo inspired a Japanese traveller to hitchhike from Alaska to a Saskatchewan reserve, all to learn more about them.

Seeing a bison — or buffalo, as they are traditionally known by Indigenous people — was a dream for Masaya Ogata. Growing up, he thought they were extinct. Then he read an article about buffalo returning to Peepeekisis Cree Nation.

The 24-year-old decided he was going to see one in person. He left his home in Nagano, Japan, and began the trip to the First Nation about an hour northeast of Regina. Ogata decided to fly to Alaska and then hitchhike his way toward Saskatchewan with a tent and sleeping bag.

Ogata arrived in Saskatchewan on Sunday and was dropped off at the only school on the Peepeekisis Cree Nation, the Peepeekisis Pesakastew School. Thankfully, people were at the school having a meeting. Ogata knocked and explained who he was, before being led to the meeting room and was told to wait until they were done.

"We thought somebody had brought him," Peepeekisis's Doug McKay said about when he first saw him. 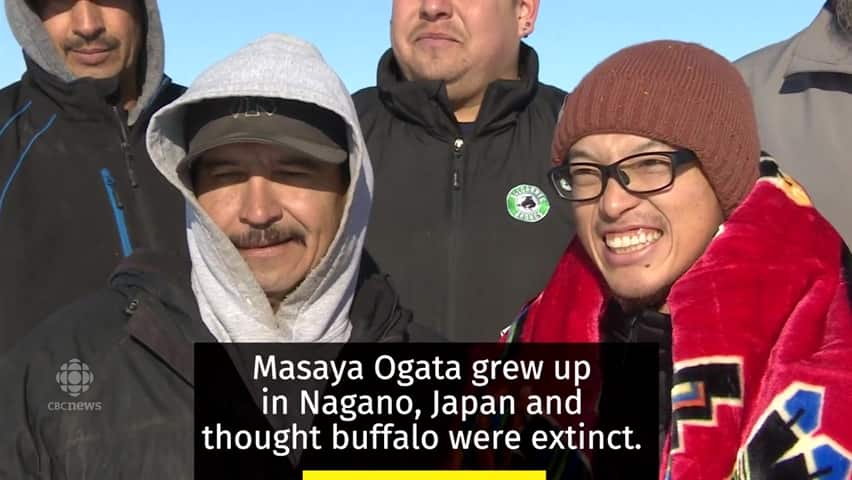 A love of bison inspired a Japanese man to travel 8,000 kilometers to see one in person

1 year agoVideo
0:57
Masaya Ogata, who grew up in Japan, thought bison — or buffalo, as they are traditionally known by Indigenous people, were extinct. Then he read a story about Peepeekisis Cree Nation welcoming a herd of buffalo onto its land and decided he had to see them in person. 0:57

McKay said he was shocked when he learned how far Ogata had travelled to be there. McKay laughed and said Ogata picked the wrong time to arrive, as the weather is getting colder, but said it was amazing to see him travel the 8,000-plus kilometres to their home.

The chief and other band members took Ogata in, setting up a room in the school and bringing him along on any activities they could.

Ogata joined a drumming circle, shot a bow and arrow, participated in a sweat with the chief, went with an outdoor education class, and of course got a chance to see buffalo in person.

"To see his face and the smile. He was so amazing," McKay said. "I said, 'That's probably the way we looked five years ago when they first brought them in.'"

"They are bigger than I thought," Ogata told CBC News with a laugh. "They are amazing — I am so excited."

Ogata stayed on the First Nation for four days, spending time with the community members and elders.

"A lot of the elders were just amazed with him," McKay said. "They couldn't understand much of what he had said, but they sat there and listened to him try to talk to them, give him a few Cree words.

"Just to see the joy in him, his smile, his eyes and everything. It'll stay with us."

On his last day at the First Nation Wednesday, as a surprise and a thank you for visiting, the band members presented Ogata with a red blanket from Peepeekisis Cree Nation to keep him warm on his travels.

Ogata couldn't stop smiling as he looked around at the buffalo and the friends he made.

While in Peepeekisis, the band members spoke about how the buffalo were once their tools, shelter, food, and way of life.

"The buffalo have a spiritual significance to our people," said Colin Stonechild, one of the council members of Peepeekisis Cree Nation. "Prior to colonization, they were our livelihood."

Ogata is similar to how they used to be, Stonechild said: nomadic, borderless and following buffalo.

"Him seeing this story brought him to us, and we feel very special that we have visitors from across the sea to come and visit us and share in the spirit of the buffalo," Stonechild said.

Opening up their First Nation to someone from a completely different background also helps break stereotypes, Stonechild said.

"Bringing the buffalo home really cements our legacy to our land," Stonechild said. "And our connection with creator. And it's bringing us visitors, and the sky's the limit for us."

Ogata decided to head to Winnipeg then Quebec to see more of Canada while he's here. But he hopes he'll be back in Peepeekisis this summer to see a powwow in person and visit his new friends.