Sixteen people are dead and 13 injured after the bus taking the Humboldt Broncos junior hockey team to a playoff game collided with a transport truck on a highway north of Tisdale, Sask., on Friday.

Sixteen people are dead and 13 injured after the bus taking the Humboldt Broncos junior hockey team to a playoff game collided with a transport truck on a highway north of Tisdale, Sask., early Friday evening.

The death toll rose to 16 after the team's athletic therapist died on Wednesday. The news of Dayna Brons's death was announced by the Saskatchewan Health Authority on behalf of her family.

Earlier in the week on Monday, the province and the RCMP released a joint statement which said that one of the players originally reported to have died, Xavier Labelle, was in fact alive. Goaltender Parker Tobin, originally reported as injured, was among those who died.

The team was on its way to Game 5 of a semifinal against the Nipawin Hawks, also in Saskatchewan, when the crash occurred around 5 p.m. CST. 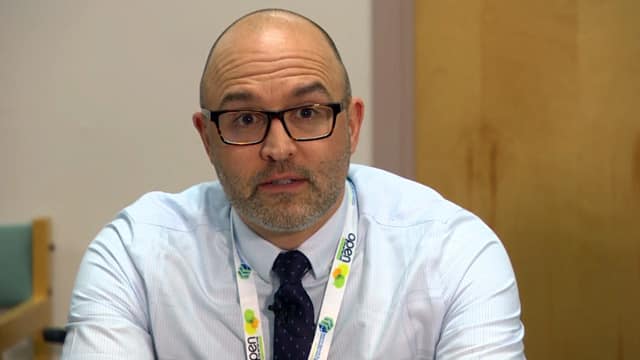 'My heart is with the patients and families'

3 years agoVideo
0:39
Dr. Mark Wahba talks about the effort to save the injured 0:39

On Monday, Saskatchewan Health Authority spokesperson Dr. Mark Wahba told reporters that a dozen people who had been on the bus remained in hospital. With permission from patients and families, Wahba said of the 12 patients:

The deceased included not only players, who were from all three Prairie provinces, but also the team's longtime coach, the assistant coach, the bus driver, and two employees of Humboldt's FM radio station. The driver of the truck was not injured.

Here's what we know so far about the victims:

Brons was the lone woman aboard the team bus. Originally from Lake Lenore, Sask., about 30 kilometres northeast of Humboldt, she had studied at the University of Regina where she received a degree in kinesiology and health studies.

Parker Tobin was among those killed in Friday's incident. He was originally misidentified as a seriously injured member of the team, while Xavier Labelle, who was reported to have died, is alive.

Tobin was in his first season with the Broncos after starting his year with the Spruce Grove Saints of the Alberta Junior Hockey League.

Tobin spent his final year of midget eligibility playing for the Drayton Valley Thunder of the AJHL and also played a season with the Leduc Oil Kings of the Alberta Midget AAA Hockey League.

The Broncos head coach and general manager was the first person confirmed dead. He lived in Humboldt but was from Peace River, Alta. One of Haugan's former players in Peace River, Bud Dyck, said the coach "never gave up on anybody. He was always there for every one of his players, always fought for every one of his players, always had their backs. ... You wanted to win for him." Haugan is survived by his wife Christine and their two sons.

Speaking at a news conference Sunday afternoon, Broncos team president Kevin Garinger, remembered Haugan as an incredible coach, husband and father. "These are his words, not mine. He talked about the fact that at the Humboldt Broncos we weren't building hockey players — we were creating amazing young men."

Hinz compiled stats for the Humboldt Broncos and worked for local radio station 107.5 Bolt FM. Reid Gardiner, who plays mid-level professional hockey, knew Hinz and had this to say on Twitter: "He loved sports and knew more facts about [the Broncos] than anyone I knew." His pastor in Humboldt says Hinz also taught Sunday school.

"Brody had recently joined our Golden West family, mentored by Tyler [Bieber] and the Bolt FM team," Lyndon Frieson, president of Golden West Radio, said in a statement posted on the station's website. "Tragedy has hit our community and it reaches into every corner of life in Humboldt."

Another company statement described Hinz as an intern still in high school.

Schatz, a native of Allan, Sask., had played centre for the Broncos for four years and served as team captain for the past two and a half years. His father, Kelly Schatz, told The Canadian Press his son's death is hard and that family members were seeking solace in one another.

Schatz was named the league's player of the month in February after earning points in eight of nine games.

The Edmonton native previously played for the Surrey Eagles of the British Columbia Hockey League. Playing forward, he was among the leading scorers in the SJHL playoffs, and had been playing on a line with Schatz.

Joseph's former coach in B.C., Blaine Neufeld, said: "Something particular about Jaxon was that he had a particular smile. He lit up the room."

In a profile published on the team's website in January, Schatz paid tribute to Joseph and fellow linemate Conner Lukan.

From growing up on a farm, Herold brought a hard work ethic to the team, and was always ready to practice or help with tasks like loading the bus, Smith said.

Cross was assistant coach of the Broncos and previously played for the Estevan Bruins of the SJHL. He was also a forward on the York University Lions men's hockey team in Toronto.

"I can honestly say I didn't know a more kind-hearted, generous, caring and overall nice person," cousin Graeme Cross said in an online tribute. "Mark was one of those people that just made you feel safe and brought a special spark when you were in his presence."

Bieber was a play-by-play radio announcer for the Broncos, and worked with Humboldt station 107.5 Bolt FM. A manager with the company that owns the station confirmed in an email to staff that Bieber died in the crash.

Steven Wilson, a co-worker in Weyburn, Sask., said it was Bieber's first season announcing for the team. He also covered morning news.

"He definitely had a natural talent," said Wilson. "He was just passionate about sports."

Wack was a defenceman, who had played for the Broncos for two seasons.

Alicia Wack, cousin of Stephen Wack, told The Canadian Press the 21-year-old did not survive the collision.

Wack's younger brother, Justin Wack, said his brother was talented at making videos. He shared one of Stephen's videos on Twitter.

Hi guys, I am the little brother of Stephen Wack, who didn't make it last night in the accident. he was really talented at making videos. I was wondering if you could play this one on HNIC for him tonight? I know he'd really appreciate it. <a href="https://t.co/wQUOqt6SNs">https://t.co/wQUOqt6SNs</a>

Along with Adam Herold, Rene Cannon also billeted Logan Hunter and Xavier Labelle. She confirmed that she believed Hunter and Labelle, both 18, were among those killed. Labelle, however, is still alive.

Hunter, who played for the St. Albert Raiders before coming to Humboldt, had finished Grade 12, but was in the process of upgrading his marks and had taken his SATs in the past year.

"He had this smirk about him most of the time that might have made you think he was a little bit cocky but he was truly this kind soul, that lay down on the floor and spent time with our puppies," she said, recalling his ever-ready willingness to play games or mini-stick matches with her children.

Lukan, a Broncos forward, was from Slave Lake, Alta. He joined the Broncos this season, after playing with the Spruce Grove Saints in the Alberta Junior Hockey League.

Kevin Garinger, team president of the Broncos, billeted Lukan. He remembered him Sunday morning during an interview with the CBC's Wendy Mesley.

Doerksen was the driver of the bus. He worked for Charlie's Charters based in Tisdale, Sask.

"He loved us kids, he loved this community … He kept our family always happy and he loved what he did. It wasn't work for him. He loved driving all those boys, all those teams, and he did it with a smile on his face."

Those who paid tribute to him on Facebook said he had a passion for hockey. Trevis Sturby, a manager with the North East Midge AA hockey club, called him a "great bus driver" who got players home safely on previous trips under bad road conditions.

The Kinistino Tigers, another hockey team that Doerksen drove to and from playoff games, posted a tribute on Twitter.

"In talking to him, he spoke at length of his time in rinks with his own family and now how much he enjoyed being able to take and watch other teams from minor, to senior to SJHL to their hockey games.

"We will never forget the smile on your face as we left Allan [Sask.] after winning the Championship and got you to give 'two honks for the Cup.' Tonight Glen, we give two honks for you. Rest easy sir."

Thomas played right wing and was from Saskatoon.

His father, Scott Thomas, said Evan was the "kind of kid any dad would be proud to call his" own. "He was a self-driven, motivated, retrospective, quiet, confident and very self-assured young man."

It was the 18-year-old's first season as a forward with the Broncos. His dad said he was an athlete, playing both hockey and baseball, as well as a strong student.

Taryn Warford, whose parents billetted Thomas, said on Instagram: "It was an honour to have you be a part of our family this hockey season, Evan. You will forever be in our hearts."

Leicht first played for the Broncos organization as a bantam AA player in 2013.

The Lethbridge, Alta., player was on life support so his organs could be donated.

Boulet was described as a "caring, humble and genuine man who would do anything for anyone before himself."

His organs were expected to save at least six lives.​