The parents of a slain Regina teen want the world to know the name and the face of the obsessed ex-boyfriend who stalked and eventually killed their daughter in 2015.

Hannah Leflar's parents want the world to know who murdered their 16-year-old daughter.

They want the world to know the name and the face of the obsessed ex-boyfriend who stalked her for months and eventually plotted and carried out her murder.

The young man, who is now 19, pleaded guilty to first-degree murder in April 2016 in Regina but cannot be named because he was 16 when he killed Leflar.

On Wednesday, a judge will decide if he receives a youth or adult sentence. If he gets an adult sentence, his name and face will become public.

But if he receives a youth sentence, his identity will be protected forever.

An adult sentence comes with parole ineligibility for 10 years. A youth sentence would keep him behind bars for six years, with the remaining four supervised in the community.

"We know he's not going to spend the rest of his life in jail," said Janet Leflar, Hannah's mother.

"I want his name Googled every time he tries to get a job or go on a date."

Hannah's parents haven't spoken much about their daughter publicly but agreed to talk to CBC, in part because they wanted the public to know about the person they lost.

Hannah Maggie Leflar was born on Nov. 19, 1998, and her parents describe her as the ideal daughter.

She was on the honour roll at Thom Collegiate. At the time of her death, she excelled in the trades program at school — it was something her parents thought she would pursue. In addition to being a great student, she was a loyal friend and willing to tackle anything.

Hannah had an interest in writing and drawing. She loved horseback riding and playing video games.

Hannah split her time between the home of her mother and stepfather, Wade Anderson, and that of her father, Jeff Leflar, and stepmother, Lore Orasan.

"She was exactly the kind of 16-year-old daughter any mom or dad would want to have," said Wade Anderson.

"You do your best raising them and hope they turn out to be good people, and she was good people," Janet Leflar said. 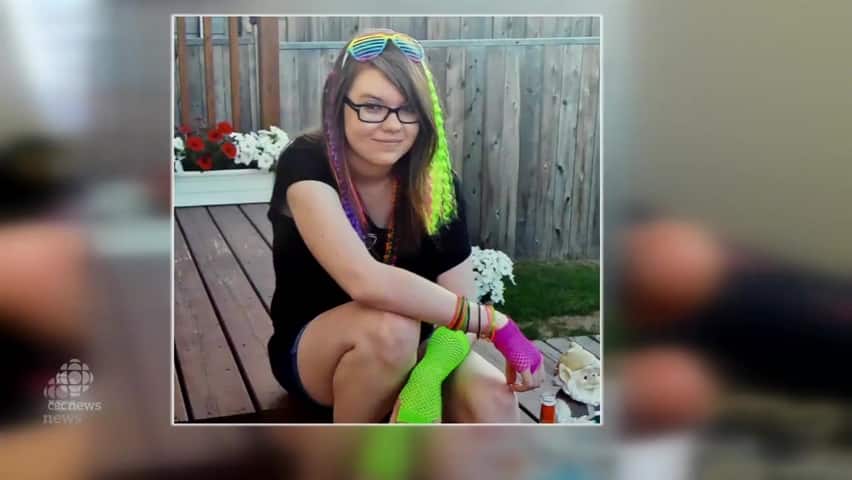 Hannah Leflar's parents describe her as the ideal daughter

Hannah and her killer had only dated for six months, but he never got over her.

In October 2014, five months after Hannah broke up with him, the teen hatched a plan he called Project Zombify. It involved recruiting friends, the goal being to hurt and possibly kill Hannah's new boyfriend.

The group was going to ambush the boyfriend in a park, but the plan never came to fruition, as the couple broke up.

In the months leading up to the murder, the killer asked friends to keep tabs on Hannah. One friend signed up for the same driver training class. The killer told another friend on Facebook that he was thinking about murdering her. The killer then set up a fake Facebook account.

On Jan. 12, the killer recruited a friend to bring a knife to school and lure Hannah to her home alone.

After school, Hannah walked into her home around 3:45 p.m. Her ex-boyfriend and a friend had been sitting in a truck outside waiting for her. Her ex-boyfriend came into the house and chased her, eventually stabbing her more than 10 times in her parent's bedroom.

Wade Anderson came home from work on Jan. 12 to find his bloodied stepdaughter dead and face down on the floor of his room. Anderson and Leflar say they haven't had a good day since.

Hannah's bed remains unmade. The posters she put up, some the night before her death, still hang on her wall. The only obvious addition to the room is a large purple urn on her nightstand.

"It still smells like her in here. I just didn't want to move anything," Janet Leflar said, standing near Hannah's bed.

Leflar and Anderson moved their own bed to the basement. The master bedroom is now used for storage.

"It's all so surreal and it's unbelievable. We're still trying to come to grips with even how she died," Leflar said, her voice shaking.

"It's been a living hell, trying to get some kind of semblance of normalcy, and we can't."

Leflar has memorialized her daughter with a pair of tattoos. On her right forearm is Hannah's handprint; on her left is Hannah as a three-year-old wearing a raincoat, standing in a puddle.

At the home of Jeff Leflar and Lore Orasan, Hannah's room has also been left untouched.

"She was my everything. She was my motivation in life, to be a better person. She was an absolute joy to raise," said Jeff Leflar, choking back tears. "We haven't been able to take a step forward."

"We can't listen to happy stories," Orasan said. "People always talk about their kids, and what do you tell them?"

The teen who helped Hannah's killer has pleaded guilty to second-degree murder for his part and cannot be named because he was a minor at the time. He was at Hannah's during the murder, although his role in the incident is not clear.

His sentencing hearing is set for the fall, at which point the family will likely learn more about the plot to kill Hannah.

We haven't been able to take a step forward.- Jeff Leflar

During his two-week sentencing hearing, the killer was described by a Crown witness and psychiatrist as having psychopathic tendencies.

But the court also heard about how the justice system could rehabilitate him.

Still, the family is not prepared for the possibility of a youth sentence.

"He's not sorry," Orasan said. "He's very proud of what he did in his sick mind. He medicated himself with this."

"This kid is the devil in disguise," Jeff Leflar said.

Whatever the sentence, it won't compare to the one Hannah's parents received on Jan. 12, 2015.

"You can't go forward, you can't go back, you're in limbo," Jeff Leflar said. "We've been given a life sentence."