Humboldt Broncos team chaplain Sean Brandow was thrust into the national spotlight last year when he shared humour, helplessness, and hope during a televised vigil for victims of the crash. He will deliver a sermon in another televised service to mark the one-year anniversary.

Pastor Sean Brandow reflects on public grief, forgiveness and the brevity of life

Humboldt Broncos team pastor Sean Brandow has become more famous than he would like.

But the 39-year-old pastor will swallow his humility to deliver another nationally televised sermon Saturday afternoon to mark the one-year anniversary of the horrific bus crash that rocked his community and a nation.

Three thousand people are expected to fill the Elgar Petersen Arena in Humboldt, Sask., to remember 16 people who died and pay tribute to 13 who survived. Some of the survivors are coping with paralysis, brain injuries and post-traumatic stress disorder.

Brandow was thrust into the spotlight last April at a vigil for victims of the crash, attended by Prime Minister Justin Trudeau and watched by millions, where he wove together humour, helplessness, and hope.

He joked that he couldn't fit into his suit but was wearing "fancy socks" under his cowboy boots, then sobbed as he cried, "Where was God?" It was a question that resonated with a nation as Canadians grappled with the unimaginable scale of the tragedy.

On April 6, 2018, a semi-trailer driver, Jaskirat Singh Sidhu, blew through a stop sign into the path of the Broncos team bus, causing a catastrophic collision that ripped the roof right off the bus.

Brandow had driven upon the crash scene with his wife and sons on their way to watch the Broncos playoff game against the Nipawin Hawks. Later, he comforted players in hospital. 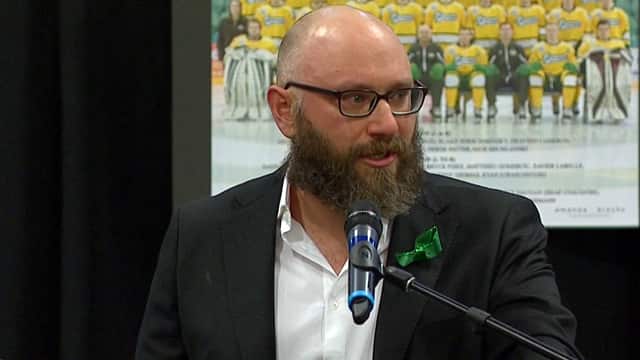 Moving through the valley of darkness

In his sermon, he said he'd never felt so empty: "Just to hear groaning, and panic, and fear, and distress, and pain and just nothing but darkness."

Brandow said that as he held the hand of "a lifeless body," he thought, "This is it. This is the valley of death."

That Sunday night, in the small city's arena, Brandow also offered a message of hope. He assured the mourners that "God is with the broken-hearted. … He's with us."

As he prepares his anniversary sermon, Brandow reflects on collective and public grief, forgiveness, faith and the brevity of life.

When Brandow looks out at Saturday's crowd, he will search for the faces of 29 families whose loved ones were killed or hurt in a crash that made headlines around the world.

There are complexities attached to mourning in the public eye, rather than privately, and grieving collectively — forever connected by a tragic event — rather than individually, says Brandow.

"It's been a blessing," Thomas said, but "sometimes it's felt like a curse."

"Sometimes you worry, just because I'm feeling this, is this normal? Because other people are feeling other stuff. So you tend to compare yourself in the grief path, if you will, and if what you're feeling is the right thing or the wrong thing."

Russ Herold, the father of the youngest player on the bus, Adam, 16, who died in the crash, has reached the exhaustion point with public grief. His family won't be attending the memorial service.

"I think a lot of people are just hoping that we can move on and grieve on our own," Herold said. "We're not going to stop grieving, we're not going to forget. But we just need to do it alone, and not be in the camera."

The issue of forgiveness keeps popping up, but it won't be the focus of Brandow's sermon.

He doesn't feel comfortable instructing people to forgive, as mandated in the Bible, if they don't practise the Christian faith.

At the sentencing hearing for the truck driver, who pleaded guilty to 29 counts of dangerous driving, families expressed a range of emotions from rage to forgiveness.

"You hurt my baby, you broke him, and for this I will never forgive you," Andrea Joseph, who lost her son Jaxon, told the driver in court. "You don't deserve my forgiveness."

"I want to tell you I forgive you," the young mother said to the truck driver in court. "I have been forgiven for things when I didn't deserve it, and so I will do the same."

Brandow says the Bible is clear that those who have been forgiven by Jesus for their sins are called upon to forgive others. It's a conscious decision one must make, according to the pastor, and should not hinge on whether the person deserves to be forgiven.

"There's great freedom in forgiveness," he said, noting that it has freed him of hatred, anger and bitterness.

"But to dictate whether or not someone should forgive is a very different thing."

Brandow's raw anguish was palpable at last year's vigil, when he cried, "Where was God?"

For him, it was not a crisis of faith. But he understands how it could be for others.

"How could God allow this? That's really at the heart of it, and where was God?"

The crash, and his inability to make sense of it, has only cemented Brandow's belief that God is in charge.

"If God was a God that we could fully understand and could dictate what we thought should happen, this world would be in rough shape. If I got my way every time, and if I could formulate a God that could fit into a box, whatever I want him to be, he's no longer God anymore."

As the Broncos' pastor for eight years, Brandow didn't do traditional religious rituals with the players. He didn't lead prayers in the dressing room. For him, it was about forming relationships and being available for chats, usually during outdoor excursions, hunting, fishing, or sharing a meal.

If he could, he'd start a conversation about God. But often, it was about trying to make young men look beyond hockey and find their place in the world.

In one team exercise, the players had to take turns diving to the bottom of a pool to collect and assemble PVC pipes.

They were restricted to just one breath before giving the next guy a turn.

Brandow says the lesson was simple: "Take seriously the breath that we have, and to do well with the time that we have here."

As the anniversary approaches, Brandow is convinced the crash made all of us acutely aware of our mortality.

"The much bigger thing, I think, that really hit people was just the brevity of life. These guys were in the prime of their life. Strong, healthy, you know. That's a hard thing to swallow."

A reminder, he says, to make each breath, each moment, count. It can all be gone in a second.