The Regina Fire Department has simmered down about a burning Yule log displayed on Mosaic Stadium's giant TV screens, now that the football club has agreed to change the video. 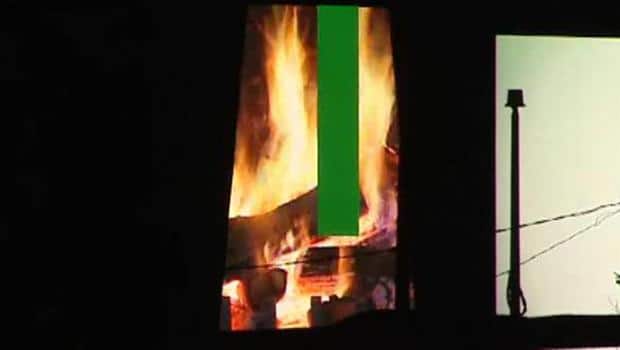 The Regina Fire Department has stopped fuming about a burning Yule log displayed at Mosaic Stadium's giant TV screens, now that the football club has agreed to change the video.

For weeks, the cheery image of the burning log was displayed on the video scoreboard at the Saskatchewan Roughriders home venue west of the downtown.

The flaming log was also shown on banner screens across the stands.

The problem was, from a distance some people thought the stadium was on fire — there have been four frantic calls to 911 in the past few weeks.

Deputy fire chief Gerard Kay said the callers were very descriptive, reporting "a very bright flame. In some cases the smell of smoke."

Standing in the parking lot at the nearby Regina fieldhouse recently, a CBC journalist saw the televised flames apparently looming over neighbourhood houses.

"I'm hoping that we can eliminate this and put something a little more appropriate up," Kay said. "I mean, it is appropriate, but it is a public safety concern."

A fire crew was dispatched to the scene most recently late Wednesday afternoon.

Trying to snuff out the false alarms, Kay said he called around to get the log video replaced.

"Maybe some snowflakes or Santa or something like that," he said.

The Roughriders organization, which is in charge of what appears on the TVs, got the message.

Roughriders CEO Jim Hopson told CBC Thursday that they've just changed the log to a "thank you" message to fans. The flaming banner TVs have also been switched off.

"It's funny, someone jokingly said, 'Y'know, I don't know about that Yule log. Someone is going to think the stadium is on fire,'" Hopson said. "Sure as heck, someone thought the stadium was on fire."

Another holiday-themed display will likely go up later, he said.

With files from CBC's Dani Mario