Thousands of snakes emerge from hibernation, immediately get frisky

Every year in Fort Livingstone people gather to see red-sided garter snakes get busy after a long cold winter.

The mating maelstrom was first documented 145 years ago

Over the May long weekend, as people get used to sunshine and warmer temperatures, things start to get hot, so to speak, for thousands of snakes in east-central Saskatchewan, near Fort Livingstone.

Every year the growing population of red-sided garter snakes emerge from their winter slumber to warm themselves, adjust to their surroundings, mingle and then fight like there's no tomorrow for the chance to mate with one of the few female snakes.

But this isn't some flash in the pan spring fling for the local snake population.

Ray Poulin, curator of vertebrate zoology at the Royal Saskatchewan Museum, said there are records dating back 145 years which describe the phenomenon. Accounts from when the North West Mounted Police established their first headquarters in Fort Livingstone detail snakes infiltrating their living quarters.

According to Poulin, the topography of the surrounding area is perfect for the snakes to stick it out during the winter before their spring ritual. 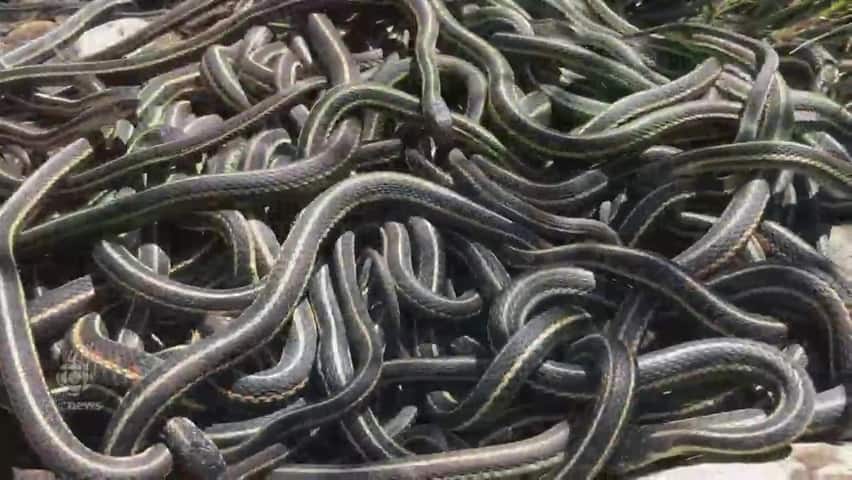 2 years agoVideo
0:30
If you like red-sided garter snakes, you'll find lots of them at the Fort Livingstone historic site near Pelly, Sask. 0:30

"They have to get below the frost line, or else they die. In those areas around Fort Livingstone you've got limestone bedrock which over geologic time will erode and create little caverns and cavern systems," said Poulin.

These subterranean networks are below the frost line and the perfect place for a winter-long snake cuddle session, or "hibernaculum."

When the snakes leave the safety of the hibernaculum in the spring, it is for the purpose of mating. They don't go far from where they wintered, said Poulin, and they don't waste any time.

"The males come out first and they warm up a little bit in the sun and then when the females emerge from the den it's a big frenzy."

The tangle of snakes is called a mating ball, according to Poulin. "The males will form a big congregation on any female that comes out. So you'll often see, sort of, a mass snakes that are, sort of maybe, falling down the hillside or moving all at once and what that is, is there's a female in the centre of that and all the snakes on the outside are males trying to mate with her," he said.

Tourists looking to peep on the snakes and their mating ball rituals should keep a few things in mind when they venture out to Fort Livingstone, Poulin said.

"Do not pick up the female snakes," he said. "The females are the really big snakes."

Snakes like the heat, so sunny days are the ones to go out. The phenomenon typically kicks off on May long weekend and according to Poulin will last two to three weeks.

With files from Nicole Lavergne-Smith