Dog recovering after being shot with arrow near Regina

A dog is on the mend after somebody shot it with an arrow on the weekend. 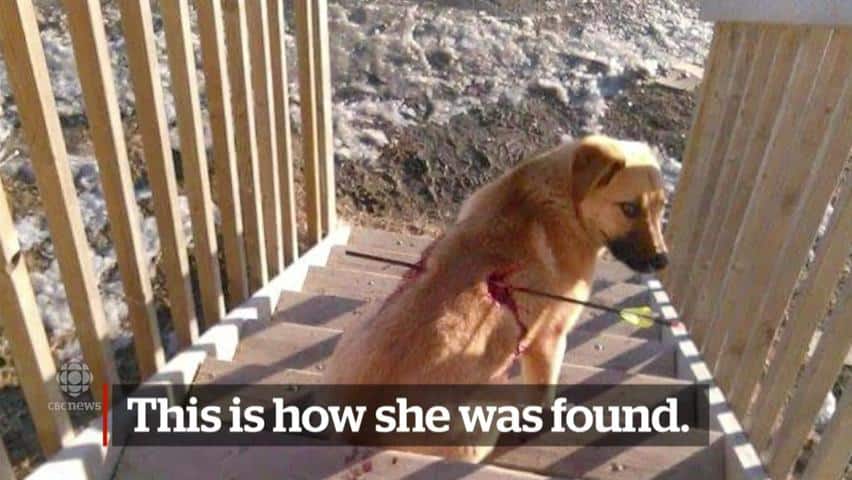 5 years agoVideo
0:33
This dog was found with an arrow stuck in her on a property about 40 kilometres northeast of Regina 0:33

A dog is on the mend after somebody shot it with an arrow on the weekend.

It happened Sunday northeast of Regina.

People in the area found the injured dog with the arrow still stuck in its body.

A Regina animal rescue organization, CC RezQs, took the dog, an adult female, to veterinarians in Lumsden for X-rays and emergency treatment.

"Dr. K at TM'z Vet Clinic says she is the luckiest dog in the world," the group said on its Facebook page. "The arrow shot through her missed her spinal cord by millimetres!! She is staying overnight to have her wound [flushed]. The entry and exit wounds are very disturbing to see, but we are so thankful she was able to be rescued in time."

The dog, dubbed Arrow, may need surgery to remove fragments of vertebrae, the group said.

"What we're seeing is a very stable and a dog I don't think is going have any permanent, lasting effects from this," Cantin said.

It's believed the dog is a German Shepherd-Husky mix, about two years old.

The Facebook page notes many people have come forward offering to help or donate money to cover vet bills.

"Pretty inspired by the huge amount of offers of help for this beautiful dog," Lynne Sheldon said on Facebook. "To me, that goes to show that while there are some terrible people who do things like this, there are more wonderful ones who want to make it right."

The group says it believes the dog is a stray, but has found a foster home to care for her while she recovers. Members have reported the incident to the RCMP.