Second-degree murder trial of Gerald Stanley in Saskatchewan could have fallout for reconciliation in Canada.

A heavy police presence is expected to return to the Saskatchewan town of Battleford when a high-stakes second-degree murder trial begins on Monday.

The death of 22-year-old Colten Boushie is inflaming tensions that have existed for years between the community's Indigenous populations and rural landowners.

"This trial that they are having is re-opening wounds," says Alvin Baptiste as he stands next to the isolated grave of Boushie, his nephew, on the Red Pheasant First Nation.

Boushie, a young Indigenous man, was shot and killed shortly after driving onto farmer Gerald Stanley's property with a group of friends near Biggar, Sask., in August 2016.

Stanley was charged with second degree murder. He has pleaded not guilty.

Many of the details of the shooting investigation are under a publication ban, but it is the trial's far-reaching implications for reconciliation that some are watching as closely as the case itself.

Boushie was living on Red Pheasant, a reserve in the North Battleford region. A number of racist, offensive online messages after his death sparked a hate crime investigation.

Things got so heated that Premier Brad Wall stepped up, calling for an end to the racist comments.

Indigenous journalist Doug Cuthand has been following the case and will be covering the trial. He says that no matter how the jury decides based on the evidence, there could be problems for Saskatchewan.

Biggar is a town of around 2,000 located about a 40-minute drive from Red Pheasant First Nation, population 600. The communities are separated by acres of farmland, and residents don't always mix. It's a division that describes much of the province.

"There's almost like two solitudes living together there, and neither side trusts each other," Cuthand says. "I think this case is probably the most polarized of all the ones I've seen."

The province has made progress in bridging the divides and addressing racist attitudes in recent years, with some reserves building productive and positive relationships with the communities nearby. But Cuthand says there are fears this could wane based on the outcome of this trial.

Chris Murphy, a lawyer representing Boushie's mother, agrees the trial represents the elements of a larger conversation about reconciliation that is going on across Canada.

"Reconciliation requires a lot more than just talk," Murphy says. "Something much broader and longer is going to have to take place before these two groups in Saskatchewan and across the country are really going to feel as though they are being heard."

Despite the attention the case is attracting, Boushie's uncle says he is hoping for answers but doesn't necessarily expect to get them.

CBC News spoke to other residents of the area. Due to the nature of the case and the tension in the community, none were willing to be identified for this story.

However, several disagreed with Baptiste's view, saying they have faith in the justice system and its ability to reach a decision based on the facts of the case.

In the end, Baptiste says, he just wants to know what happened to his nephew. "My heart is heavy once again. Hopefully my family will heal after this trial." 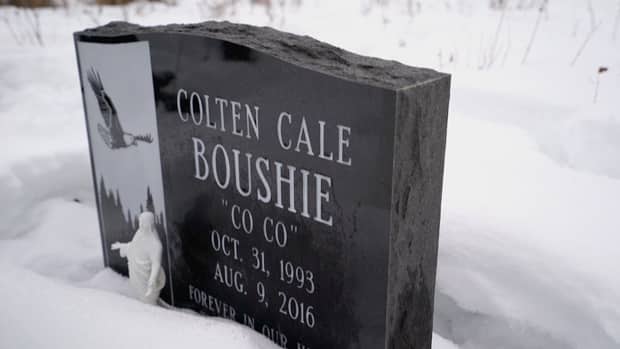 3 years agoVideo
8:23
Racial tension in Saskatchewan is front and centre at the Colten Boushie trial starting Monday. Boushie, a young Indigenous man, was shot to death on a farm in 2016. 8:23
CBC's Journalistic Standards and Practices|About CBC News