Saskatchewan Premier Brad Wall announces he is retiring from politics, but will stay on until his party chooses a new leader.

Saskatchewan Premier Brad Wall announced on Thursday he is retiring from politics after 14 years as the leader of the Saskatchewan Party.

Wall, 51, said he would stay on as premier until the party elects a new leader.

"Together with [my wife] Tami, I have decided that now is the time for renewal ­— for my party, for the government, for the province. It's time for me to retire from politics," Wall said Thursday morning in a video posted to Facebook. 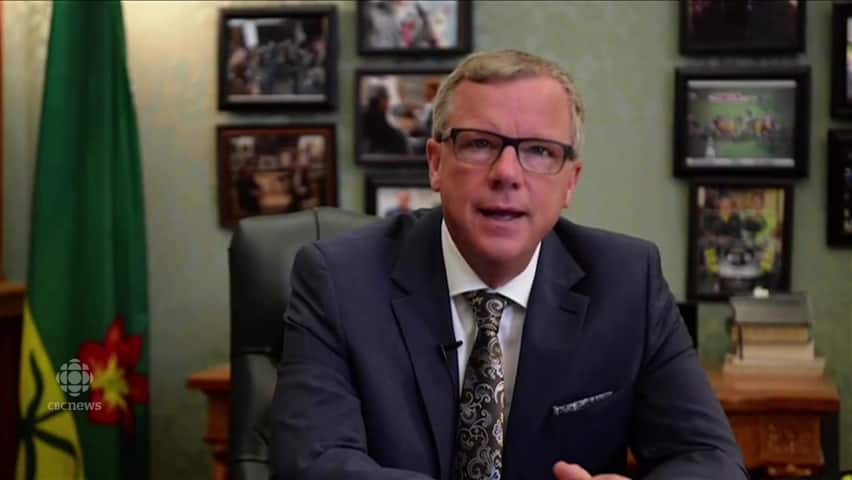 3 years ago
5:13
Saskatchewan Premier Brad Wall announcing his retirement via a Facebook message on his personal page. 5:13

Wall, who is in his third term as premier, mentioned the decision to retire was made around the end of June.

The announcement comes in the midst of a tumultuous term due to a slumping economy and highly criticized cuts made in March's provincial budget.

During the 2016 provincial election, the Saskatchewan Party won 51 out of 61 seats under Wall's leadership. Wall's popularity took a significant hit after the most recent budget, which saw the province post a $685-million deficit.

The province shut down the Saskatchewan Transportation Company, which provided bus service carrying people and freight between major urban centres, much to the chagrin of residents in rural and remote parts of the province.

Universities and schools saw their funding slashed. Municipalities struggled to cope with the scrapping of the grants-in-lieu program, which saw payments made to municipalities by Crown corporations instead of property taxes.

Wall identified cuts to the province's libraries, worth $4.8 million, as a mistake made by the government. The province later reversed the cuts.

And the provincial sales tax was raised to six per cent for the first time since it was cut by the NDP in 2006.

New leader will have time to make mark

First elected as premier in 2007, Wall had served as the MLA for Swift Current since 1999. Wall was acclaimed as leader of the party in 2004.

"I believe, though, that to best ensure continued success in that work, Saskatchewan needs renewal, a fresh perspective in leadership," Wall said today.

When questioned about the timing of the announcement, Wall said it was important to give the next leader of the party time to make themselves familiar with the people of Saskatchewan and the issues that need to be addressed.

Although Wall is staying on until a new leader is chosen, he said he has no immediate job prospects.

Regardless of what path he chooses, Wall said the premiership would be the highlight of his career.

Wall highlighted projects such as hospitals being built, the addition of 750 more doctors and 3,000 more nurses in the province, and the "record number of highway kilometres" repaired. Mobile users: View the document
(PDF KB)
(Text KB)CBC is not responsible for 3rd party content

The Saskatchewan Party will choose its new leader in a one member, one vote election.

In a press release, the party said the provincial council would meet within 30 days to draft and approve initiatives to set dates for a convention, location, nominee file fees, membership sales deadlines, a voting system and campaign expense limits.

"We have some work to do," Wall said, adding the fall sitting would be very active.

Saskatchewan's population grew by 160,000 during Wall's tenure and 67,000 jobs were created during his time as premier.

During the party's rule, 40 new and replacement schools were opened in the province. Wall had criticized the previous NDP government for its many closures, including 176 schools throughout the province.

"This was such a difficult decision to make," Wall said of his plan to leave politics.