Another batch of cherry whiskey rolls out from Last Mountain distillery

In what is quickly becoming a seasonal tradition, a small distillery near Regina has produced another batch of quick-to-sell cherry whiskey. 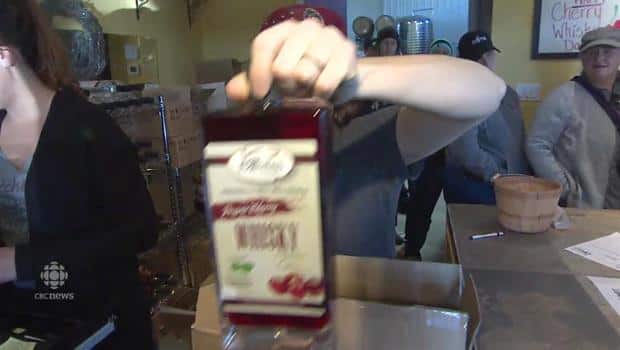 In what is quickly becoming a seasonal tradition, a small distillery near Regina has produced another batch of quick-to-sell cherry whiskey.

Hundreds of people were lined up at the Last Mountain Distillery in Lumsden, Sask., Saturday to pick up a bottle of a locally made Prairie Cherry Whiskey.

"I think the key is that it's not a syrupy cherry whiskey," Meredith Schmidt, from the distillery, said. "It's not the all-sugar cherry whiskey ... it's a true whiskey. It's been kissed by Saskatchewan cherries."

The product sold out quickly when it was first introduced in 2014, when about 1,000 bottles were produced.

This year, customers are considering buying enough of the whiskey to provide presents for the holiday season and enjoy some before hand, too.

"We might test it out before Christmas," Laurie Williams, who was in the store Saturday, said. "But these will be brought out for Christmas for sure. And maybe one of these might be somebody's gift."