Alternate for short supply drugs should be covered, doctor says

A Saskatoon doctor is pressing the provincial government to pay the costs of an alternate pain control medication, in the face of potential supply problems. 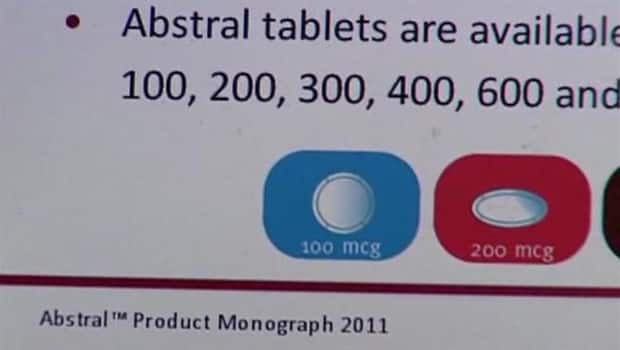 A Saskatoon doctor is pressing the provincial government to pay the costs of an alternate pain control medication, in the face of potential supply problems.

Dr. Ken Stakiw, the head of palliative care for the health region in Saskatoon, says a tablet medication called Abstral should be included on the province's list of covered drugs.

The tablet, he says, can be an effective alternate to injectable pain relief medications that may be in short supply.

The pills run about $60 for a day's treatment, a cost which must be paid by patients.

Because of the concern about the supply of injectable medicines, health officials are advising doctors to use alternatives.

"I know in the hospital we've been advised to use oral preparations where we can, rather than injectable preparations," Stakiw said.

He said the Abstral tablet would be a useful alternative, especially if covered by the province.

Stakiw sought coverage from the province and learned this week that it would not happen.

Health officials said the province is coping, despite the concerns about the supply of drugs.

"We're meeting the needs without much discomfort," Don McMorris, the minister of health, said Wednesday. "If that changes and the supply changes we'll look at the other option; we're very well aware of that other option."

According to Stakiw, cancer patients are among those who benefit most from pain treatment with Abstral.

He said many of his patients can't afford the drug, although some are covered through private plans.

He added that in the palliative care ward at St. Paul's Hospital in Saskatoon, about three to six patients could benefit from Abstral on any given day.

There are 12 beds on the ward, and the unit is always filled to capacity.

McMorris said the province can move quickly, if the need for an alternative medication arises.

"The provincial drug formulary review committee is aware of the other drug and can fast track it if the supply doesn't come in as we expect it to," he said.

With files from CBC's Geoff Leo and Stefani Langenegger