A Cree community in northern Saskatchewan without access to air ambulance service says people's lives have been lost or endangered while the federal and provincial governments squabble over jurisdiction.

A Cree community in northern Saskatchewan without access to air ambulance service says people's lives have been lost or endangered while the federal and provincial governments squabble over jurisdiction.

Six hundred kilometres northeast of Saskatoon, on the southern shore of Reindeer Lake, the community of Southend is home to 1,000 people.

It doesn't have an airstrip that can accommodate an air ambulance, and the nearest hospital and doctor are located in La Ronge, a two- to three-hour drive on a winding gravel road.

Southend doesn't have a licensed ambulance or any trained paramedics stationed on reserve, so patients must wait at least five hours while an ambulance makes the round trip from La Ronge.

Community members assemble at the local health clinic to share stories of loved ones who died waiting for the ambulance or en route to hospital.

Sylvia Bird, 62, clutches a tissue as she tells of her own near-death experience. Bird was eight months pregnant in 1973 when she was engulfed in flames in a house fire. She had to wait eight hours for a taxi from La Ronge to be taken out of the community. She spent seven months in hospital receiving treatment for her burns.

Now, 42 years later, her face covered in scars, she wipes tears and shakes her head that little has changed.

"We need an airstrip. I don't want anything to happen to anyone else," Bird said.

The director of Northern Medical Services, Dr. Veronica McKinney, told CBC News that timely access to advanced medical care would save lives. She believes the airport issue is being tossed back and forth between the federal and provincial governments.

"They're falling between the cracks with jurisdictional issues," she said. McKinney is in charge of dispatching doctors to clinics in northern Saskatchewan, and she considers Southend to be the most difficult and dangerous to reach.

Southend is located on an island of hills and rock. so the only land suitable to build a 1,000-metre runway, the necessary length for air ambulance aircraft, is off the reserve.

But Aboriginal Affairs told the First Nation in a letter that the project would be rejected even if it was on reserve.

"Even if the location was on reserve, it is highly unlikely that available funds would allow for this project to be funded based on national priorities that place water and waste water as well as school projects as a top priority," wrote Aboriginal Affairs manager Brett Currie. 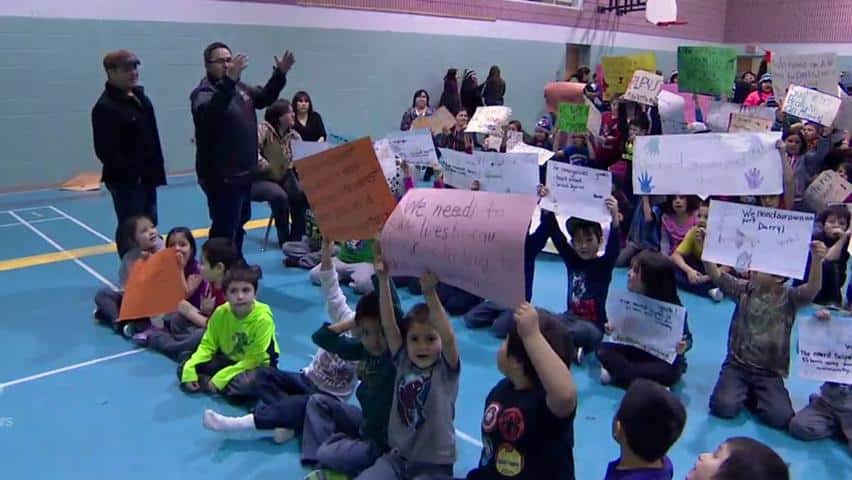 As for Transport Canada, it gives money to upgrade existing airports with scheduled passenger service, not construct new ones.

It's a similar response from the province of Saskatchewan, which maintains 17 northern airports. It hasn't built a new airport in decades, and has no plans to contribute money to constructing one in Southend.

"There are other needs within the North and we have to prioritize," Doug Wakabayashi, spokesman from the Ministry of Highways and Transportation, told CBC News.

Wakabayashi said it's up to the community to explore other options for medical transportation or reach a compromise with the federal government.

Physicians and patients in danger

On snow-covered Reindeer Lake, councillors Kevin Morin and Simon Jobb point to a makeshift runway that's been used for some medical evacuations in the winter via commercial aircraft (not a fully equipped air ambulance).

Critically ill patients must pray that their emergency happens during daylight hours in clear weather so that a commercial pilot would even attempt to land on the ice. In the past, snowmobilers have had to tow planes out of snowdrifts before takeoff.

"This is our runway, but only for a few more weeks," Jobb added. As the temperatures warm, the landing strip will begin to thaw and the community will be cut off from air service until float planes can hit the open water.

The community was previously allowed to use a small private airstrip owned by a fishing lodge, until it was shut down in November. However, that airstrip didn't have lights or a runway long enough to land an air ambulance. 6 years agoVideo
0:30
Without an airstrip, pilots and patients forced into risky medical evacuations 0:30

"The dangers that were there in landing and taking off were unbelievable," McKinney said. She admits that, in the past, physicians and pilots risked their lives under pressure to take off in the dark. In those cases, community members would park their vehicles and shine headlights to guide the plane.

Now that the private airstrip has closed, that risk has been eliminated, but the community is more isolated than ever.

"We're not looking for a handout," Jobb said. "We're willing to pitch in."

Recently, provincial and federal officials from several ministries and departments formed a working advisory committee to discuss Southend's airport problem. So far, its advice to the First Nation is to make a "business case" for how the airport would foster economic development in order to seek federal dollars through the $53 billion New Building Canada Plan. It mostly funds projects that bolster economic growth and job creation

"It has nothing to do with economics, it's about safety," Morin said. "It should be about life or death. It's about safety for our community, our children."

He points to forest fires as another serious threat to the community, and a natural disaster that often requires evacuation by air.

The councillors say it's an insult to their residents that a business case would be considered more seriously than their health and safety.