Hundreds attended the funeral for René Angélil, Céline Dion's husband and manager, in Montreal Friday. The service was highlighted by a heartfelt eulogy from Angélil's teenage son, as well as music from Dion's francophone hits. 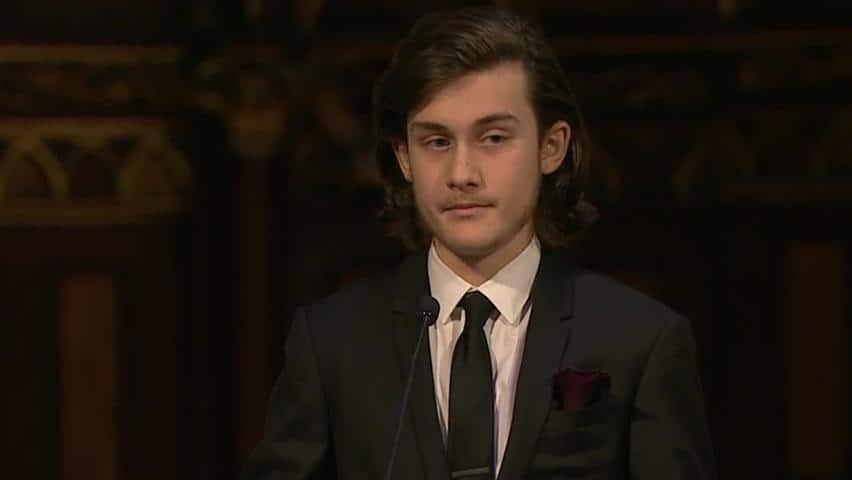 5 years ago
1:13
René Angélil's son, René-Charles, speaks at his father's funeral at the Notre-Dame Basilica in Old Montreal. 1:13

The funeral for René Angélil, Céline Dion's husband and manager, was packed with hundreds of mourners, from the famous to ordinary Quebecers, many of whom waited outside the church in the chilly Montreal air to pay their respects to the music magnate.

The service, held at the Notre-Dame Basilica where Dion and Angélil were married in 1994, was marked by a heartwarming eulogy by Angélil's teenage son René-Charles.

"Fifteen years is not a long time for a son to get to know his father," René-Charles lamented in English. "You had a busy life but we were communicating through golf, hockey, poker and smoked meat," he said with a smile, garnering chuckles from the audience.

"You are a tough act to follow, but with your help everything is going to be fine."

He promised to live up to his father's expectations, and said he had many fond memories to share with his younger brothers, five-year-old twins Nelson and Eddy.

"Je t'aime, pa," he closed with, his mother beaming from the front row.

At the end of the service, the family slowly exited the church, to applause from everyone inside. René-Charles was one of the pallbearers.

Dion was in tears as she left, then laid her head briefly on the coffin outside the church.

Fans poured out their support to the family on social media.