Kuldip Singh Sahota and other Sikhs in the community have put up a sign outside their temple wishing people a "Merry Christmas". 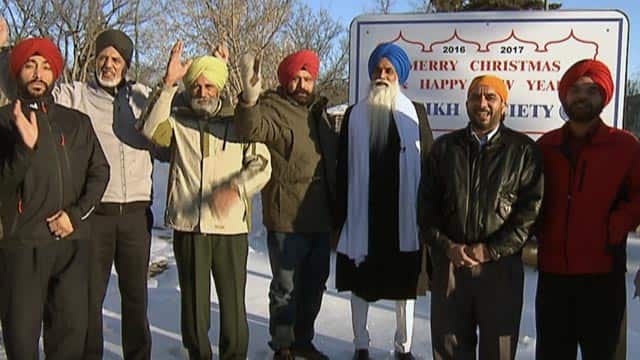 'When you say Merry Christmas, you're pouring out your compassion'

For Kuldip Singh Sahota, the phrases "season's greetings" and "happy holidays" ring false, especially since he's none too happy to brave the cold winter season in Regina.

"Shovelling the snow, my car doesn't start, my heating bill is three times more," he told the CBC's Reg Sherren on The National. "What's the greet the season for?"

For Sahota, there's only one saying that warms him inside and truly reflects the spirit of the season: "Merry Christmas."

He feels so strongly about it that he, and other Sikhs in the community, have again put up a sign outside their temple wishing people "Merry Christmas."

"When I came to Canada in 1972, it was pretty common," Sahota said of the saying. "It used to be you go to a person, give a hug and say, 'Merry Christmas to you.' It was a great thing."

Sahota says Sikhism has always been about peace and goodwill towards your fellow person, and now worries the Christian message which typifies those beliefs is fast becoming lost in favour of commercialism and Santa Claus.

"When you're saying 'Merry Christmas' to somebody else, you're pouring out your compassion, your love, your respect," he said.