RCMP in Saskatchewan have launched an investigation into an online video featuring the head of an extremist group that's poised to become Canada's next official political party.

RCMP in Saskatchewan have launched an investigation into an online video featuring the head of an extremist group that's poised to become Canada's next official political party.

The video was posted on the website of the Canadian Nationalist Party and on its Facebook and YouTube pages. It shows the leader of the group, Travis Patron, denouncing what he describes as "the parasitic tribe" or "black sheep" who he claims control the media and the central bank in Canada.

"What we need to do, perhaps more than anything, is remove these people once and for all from our country," Patron says, speaking directly to the camera.

The Canadian Nationalist Party, which promotes anti-immigrant and anti-LGBTQ views — and calls for the removal of "globalists" from the country — is in the final stages of applying to be able to collect tax-deductible political donations and run a slate of candidates in the upcoming federal election.

Elections Canada has given it until July 15 to provide the 250 signed declarations from members who are eligible voters that it needs to officially register as a federal political party.

The Canadian Anti-Hate Network, a non-profit watchdog group, has filed a formal complaint with the RCMP and Elections Canada to try to derail that effort.

"This is a group that is pure and simple a hate group," said Bernie M. Farber, the anti-hate network's chair and a human rights consultant.

"The way our laws stand today, there is nothing standing in their way save, right now, maybe 37 signatures to become an official political party here in Canada."

Patron told CBC News there are no grounds to bar his group from official party status and that his members have not violated hate speech laws.

"To date, our party has not said a hateful word, we've caused no violence, and we've done nothing illegal," he said in an email from Redvers, Sask., where he plans to run as a CNP candidate in October's federal election.

Saskatchewan RCMP confirmed they opened an investigation Wednesday into the video featuring Patron posted on the CNP website.

Farber called the video hateful and "clearly" anti-Semitic although he acknowledged Patron makes no explicit reference to Jews.

"The kind of tropes that Jews have been subject to for much of our collective lives have been exactly the words used by Mr. Patron in this video — controlling the media, controlling the entertainment business," said Farber, who is a former chief executive of the Canadian Jewish Congress.

"So, instead of using the word 'Jews,' which would immediately not just raise the ire of Canadians but would, I think, shine a spotlight for law enforcement … they're trying to walk this fine line. They just don't, in my view, do a very good job about it."

WATCH | The leader of the Canadian Anti-Hate Network explains why he asked the RCMP to investigate Travis Patron's political message: 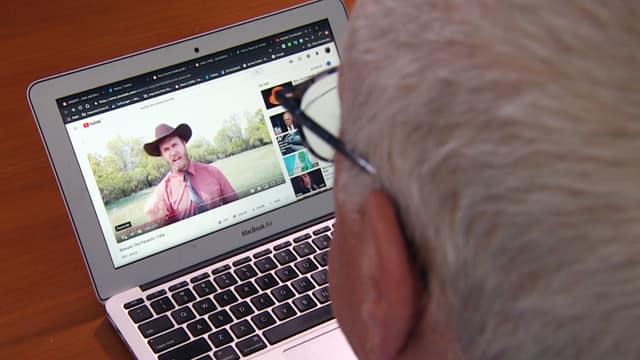 Patron told CBC News his statements are directed at "globalists."

"They go by many different names," he said. "We refer to them simply as the globalists because they conduct their business everywhere while simultaneously calling no place in particular home. We would remove [them] from our country. We have no use for them."

The RCMP say they are consulting hate crime specialists to determine whether Patron's comments in the video contravene criminal laws against advocating genocide or hatred against an identifiable group.

Patron grew up in a small farming community near in Redvers, Sask. As a university student in 2012 in the economics and business department of University of Saskatchewan, he discovered bitcoin.

He became an early investor in the cryptocurrency, an enterprise that Patron said has been "very profitable."  In 2014, he published an e-book on the subject, The Bitcoin Revolution: An Internet of Money.

The Canadian Anti-Hate Network filed a complaint with Elections Canada last week denouncing the CNP as a hate group.

"For obvious reasons, we don't want to see the CNP become a tax-supported (via contribution reimbursements) and officially recognized party," the network's complaint says.

"What can be done to prevent this neo-Nazi party from becoming an official party?"

Under the existing laws, not much.

Farber says Canada should follow countries like Germany that bar groups promoting anti-democratic views from registering in the political process.

"We have to be very careful in between finding that balance of our rights in a free and democratic society to gather and to create political parties and then balance that with hate speech and hate groups that are out there who are trying to destroy society."

Pauline Beange, an Elections Canada expert at the University of Toronto, believes Canadian governments would be "very reluctant" to pass legislation restricting access to political participation.

"Basically anybody can apply to be registered," she said. "They have to choose a name. They have to have a certain number of signatures. But after that, it is not Elections Canada's job to decide who should or who should not become a political party."

There is always a risk of extreme views on the left or right, she said, but whether the groups that espouse those views actually gain a political foothold is another matter.

"We have had parties on the extreme left like the Marxist-Leninist Party, the Communist Party of Canada. So, we have tolerated those. They have not hijacked democracy in any way, shape or form. And again, I rely on Canadian voters and their judgment."

Members of the CNP, and supporters wearing party T-shirts, appeared at recent Pride celebrations in Hamilton and Toronto.

Patron says he's reviewed numerous videos of violent clashes between protesters at those events and insists his supporters adhered to his party's code of conduct, which prohibits incitement of violence and use of hateful language.

"Taking a look at the video footage [from Pride events], at least what has been released, I'm happy to see that our members acted with professionalism, and they stood by, and they did not cause any violence," he told CBC News.

However, one video being circulated on social media from Toronto last weekend shows two men wearing CNP shirts taking part in the violence.

The clip, shot inside the Eaton Centre mall in downtown Toronto, shows one of the men pummelling a downed protester with a bike helmet.

In a video on the party's YouTube channel, Patron calls for the defunding of Pride parades across the country. He criticizes Prime Minister Justin Trudeau for "normalizing homosexuality" by appearing at Pride events.

When asked by CBC to explain his views on LGBTQ issues, he replied that homosexuality "leads to self-destruction."

"A prerequisite for the continuity of our nationhood is that of future generations, progeny and fertility ... In regards to same-sex couples, there is no biological progeny, and therefore, a nationalist government would not support such a lifestyle choice by publicly financing it."

In a statement to CBC News, Elections Canada says the Canada Elections Act has no restrictions to bar political parties with extreme views, nor can it bar candidates or parties that are under police investigation or have a criminal record.

Only prisoners are prohibited from running for office.