The Canadian protests come amid unrest in Kenosha, Wis., following the Aug. 23 police shooting of Jacob Blake, 29. He was shot by police in the back seven times as he attempted to enter his vehicle.

Protesters across Canada rallied on Saturday to spotlight police violence and demand reform.

The demonstrations come amid unrest in Kenosha, Wis., over the Aug. 23 police shooting of Jacob Blake, a Black man who was shot by police in the back seven times as he attempted to enter his vehicle.

Protesters in Canada say that fatal police confrontations involving Black and Indigenous people in this country also must not be ignored.

In Toronto, protests were held on Saturday just days after the Special Investigations Unit (SIU) cleared police officers of wrongdoing in the death of Regis Korchinski-Paquet. The 29-year-old died after falling from her 24th-floor apartment balcony while police were inside her home.

"In a lot of people's eyes, especially people in the Black community, [police] are a fear tactic, and they aren't anything more than that," said demonstrator Shaela Nathan-Turner, who is Black. "I don't look at the police as being safe, that's fear in my eyes. I don't think that's a way for anyone to live."

Nathan-Turner said funding for police should be funnelled into community associations that are better equipped to address issues like mental health, addiction and people experiencing homelessness.

"The police, there's so much that's on them. They have so many roles and things they aren't specialized in that they are expected to do. That money could be much better spent in training other people to do a lot of the things that they are doing," she said.

In Montreal, Melissa Calixte of the local community group Hoodstock pointed to the death of 58-year-old Pierre Coriolan in June 2017. Police were responding to calls about a man in distress and entered Coriolan's apartment in Montreal's Gay Village in an intervention that ended in a fatal shooting.

"I can't help but wonder how the outcome would have been different had it been a mental health professional or social worker who answered that day," Calixte said.

About 200 people marched through the rainy streets of downtown Montreal demanding extensive cuts to police budgets and increased spending on social services. As the march was ending at Place du Canada, a small group of demonstrators climbed on top of a statue of Sir John A. Macdonald before unbolting it and toppling it to the ground. 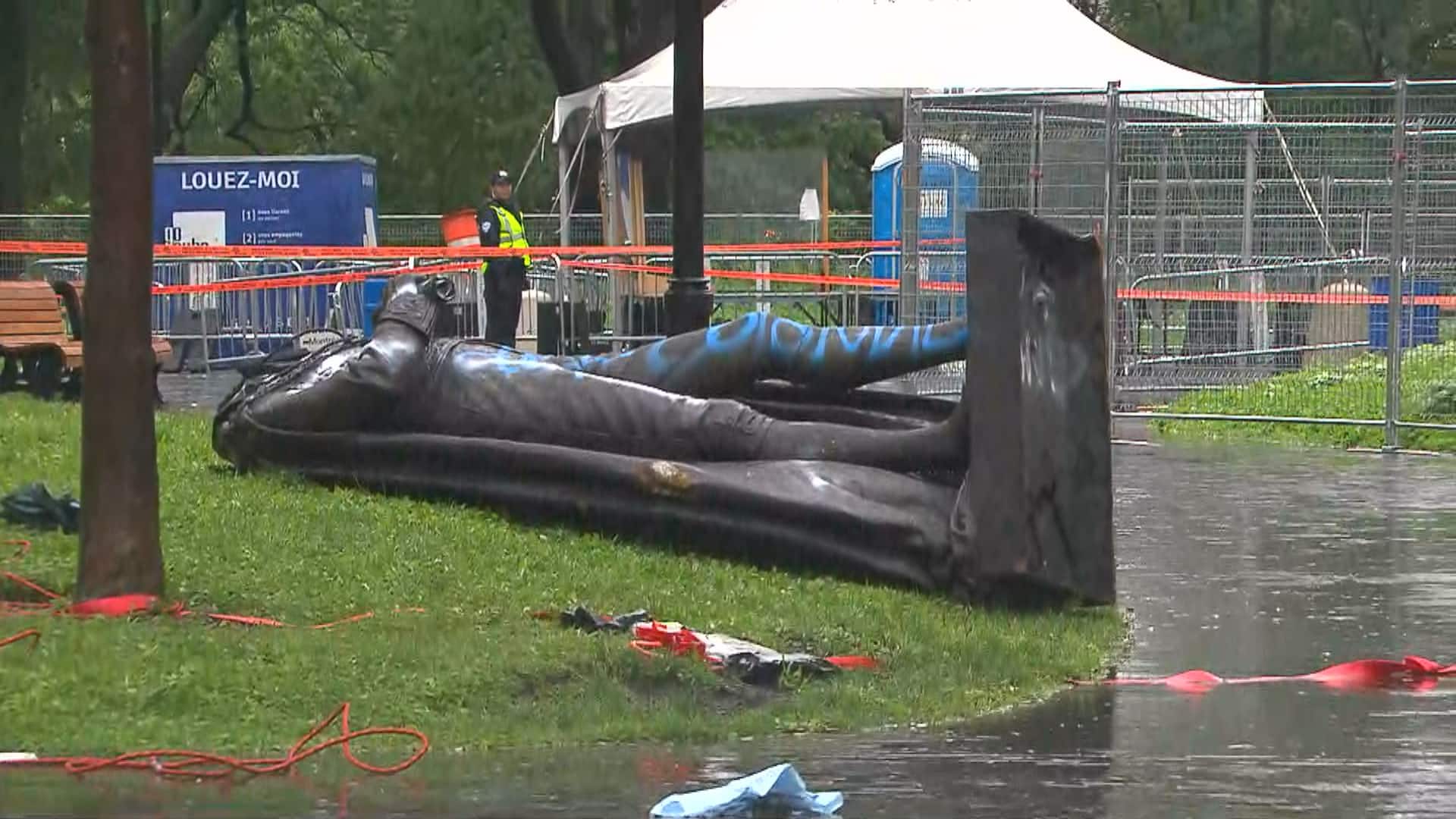 6 months ago
4:24
Hundreds of protesters took to the streets of Montreal and Toronto, calling on city officials to shrink police budgets and allocate funds to social services. 4:24

Calls to defund the police were also echoed in Calgary at a rally organized by the Defund YYC and Black Lives Matter.

"First, we want people to rally behind Black trans lives, because they matter," said LJ Joseph, vice-president of Calgary's Black Lives Matter chapter. "And then, obviously, the police sometimes aren't keeping them safe, and that's why it's important for them to have this defund movement behind them."