A P.E.I. wind farm brought in special scaffolding to repair one its turbine blades. The equipment allowed workers to cling to the side of the 80-metre tower while repairing one of the lightning protection cables inside a massive blade.

Workers were perched on the side of the 80-metre tower

If you're afraid of heights, then clinging to the side of an 80-metre wind turbine tower is likely not the job for you.

The Wind Energy Institute of Canada (WEICan) recently discovered it had a problem inside one of the turbine blades at its wind farm in Norway, P.E.I.

The turbines — the tallest structures in the area, are tempting targets for lightning strikes.

To prevent damage, each blade has a lightning protection cable inside that runs from the tip of the blade, through the rotor assembly, and down through the tower to the ground.

If a turbine is hit by a bolt of lightning, the millions of volts are safely carried into the ground.

But during a routine inspection a few months ago, workers discovered one of the inside cables had detached from the wider part of the blade, leaving the turbine unprotected from lightning strikes. 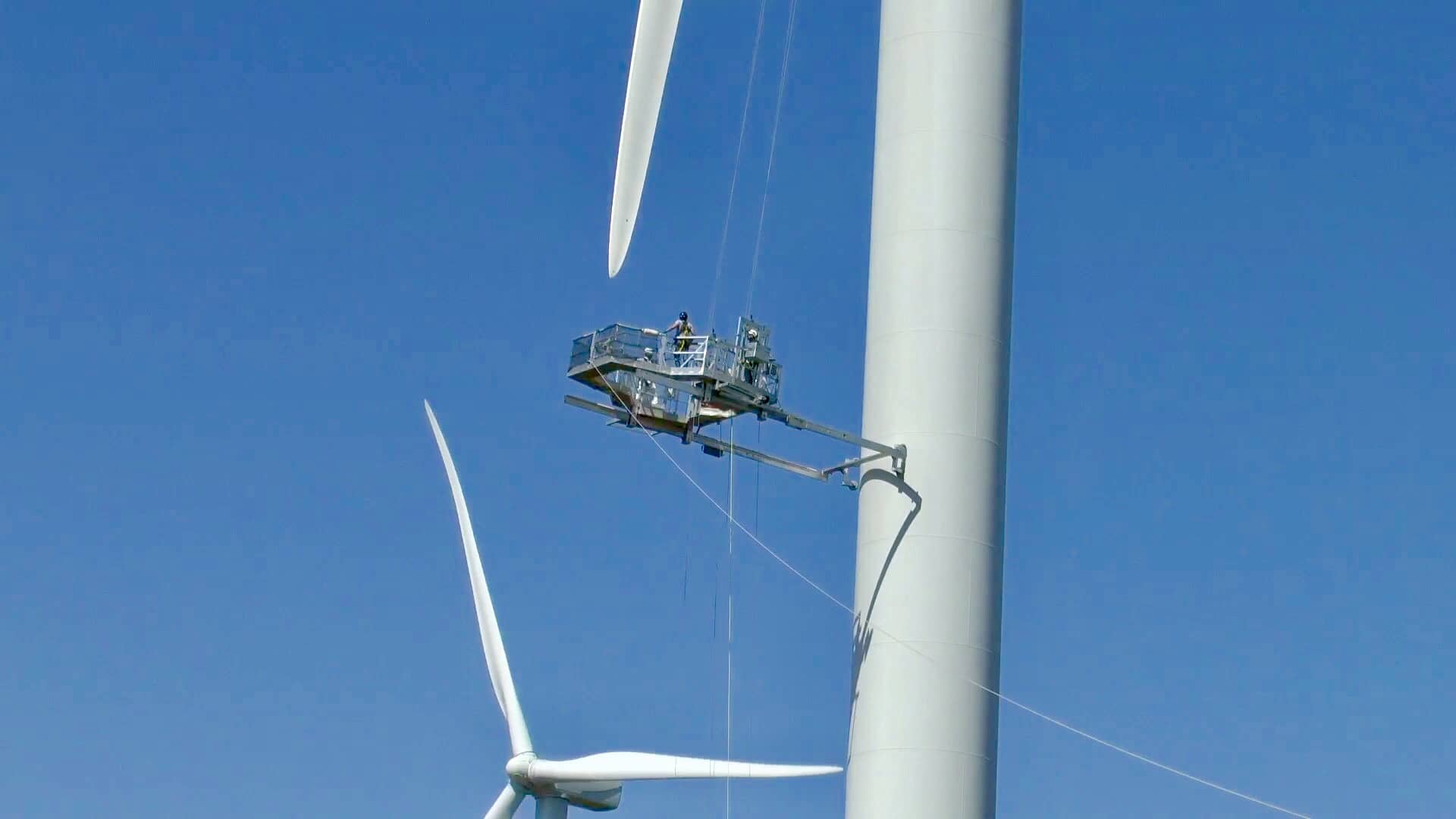 "Technically, it could destroy the entire turbine," said Scott Harper, CEO of WEICan.

"They're a little over $2 million apiece so a little bit of wire to protect it from lightning is a good investment."

The turbine was still able to operate over the last month while WEICan waited for repairs — unless there were thunderstorms in the area.

"We monitor basically right through over to New Brunswick and I think it's around 50 km away that we would put those safety precautions in place."

Those precautions included shutting down the turbine, and ensuring the unprotected blade was pointed down.

But repairing the inside cable at the tip of the blade is a big challenge.

"What we've had to do in the past, you would get a crane and you would have a man basket on that crane which you would hang," said Harper.

But that basket often swayed in the wind.

So the company doing the warranty work on the turbine, DeWind, hired a Quebec company to bring in its special platform to do the repairs.

"This is the first time we've seen them use this product," said Harper, although the Quebec company said it has used the platform at other wind farms on the Island.

"It's attaches to the turbine and they pull it up with wires and motors from the ground which allows them access without needing a crane."

Once the platform crawled up the outside of the tower, workers cut a small hole through the tip of the blade to reach the damaged cable.

The turbine is now protected from lightning damage, and the platform was taken back to Quebec.

Harper has suggested the Wind Energy Institute may look at whether it's feasible to buy one of the platforms to service all of the wind farms on the Island.

Oliver Reynoso with DeWind agreed that the platform is a faster and more economical way of performing repairs in the air.

"It's a very common practice in this industry, since cranes tend to have more cost associated with them," he said.

"These types of platforms are hooked to a trailer or in the smaller units they fit in the back of a pickup truck, making them easy to get to a site."