Chris Dawson, a Nova Scotian swimmer, has completed his journey from the New Brunswick side of the Northumberland Strait to P.E.I.

'I felt I was in a washing machine for hours' 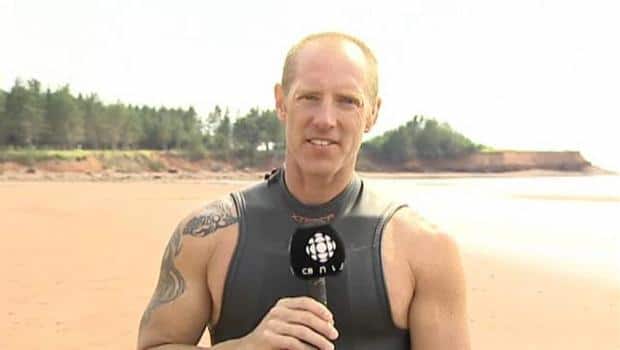 Chris Dawson, a Nova Scotian swimmer, has completed his journey from the New Brunswick side of the Northumberland Strait to P.E.I.

Dawson struggled to complete the journey by mid-afternoon, according to team member Jen Alexander, who was in the escort boat alongside the swimmer.

As his energy dwindled in rough waters, nausea set in.

"I felt I was in a washing machine for hours," Dawson told CBC News.

A second swimmer got in to motivate him the rest of the way.

Dawson was hoping to complete the journey by early afternoon.

He finished at Bells Point, about one kilometre east of his original landing target at Borden, she said.

At midday that Dawson was about halfway across the strait.

"He's just doing fantastically. His stroke rate has been very consistent throughout the swim," said Alexander, who swam the strait herself in 2006 and did a double crossing in 2007.

"He's not complaining about the water temperature and he looks quite strong."

Dawson, a triathlete, is raising funds for Homebridge Youth, which provides residential care for youth aged 12 to 18 in high-risk situations.

He had hoped to complete the 13-kilometre crossing in five hours, and began training for the swim in January.

Dawson was raised on P.E.I. and first got the idea of swimming the strait while thinking about his grandfather, who worked the ice boats crossing the strait.

Before the days of ice-breaking ferries, small open boats, known as ice boats, were used to communicate with the mainland during the winter. The boats were sometimes floated and dragged over the ice, depending on conditions.