Efforts to boost the numbers of wild Atlantic salmon in eastern P.E.I. are showing signs of success. 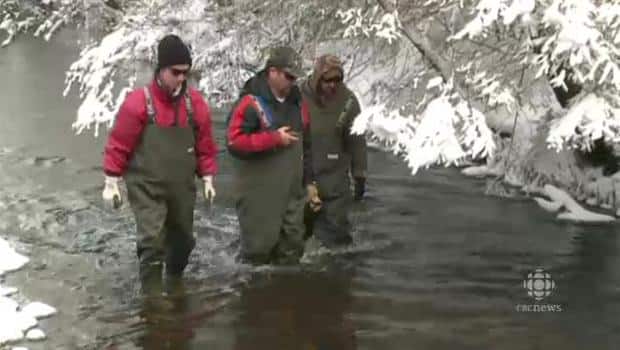 7 years ago
1:44
A P.E.I. conservation group sees signs of recovery in the number of salmon nests, or redds, in eastern rivers. 1:44

Efforts to boost the numbers of wild Atlantic salmon in eastern P.E.I. are showing signs of success.

Staff of the Souris and area wildlife federation have just finished a three-week survey of all rivers in the area. They say they're finding record numbers of Atlantic salmon nests, also called redds, by fisheries scientists.

"We would normally, over the last five years, we average about 500 redds," said Fred Cheverie, coordinator of the Souris and area branch of the P.E.I. Wildlife Federation.

Wild Atlantic salmon have been nearly wiped out on P.E.I., despite efforts to re-stock local rivers.

Workers in the Souris area have been removing one of the major hurdles to saving the salmon, beavers. The wildlife federation works with local trappers to remove the beavers. Large rivers are cleared of all colonies and dams.

"There's still areas for the beavers to work off in some tributaries.  We're not trying to run them out of house and home, there's still a place for them, The point is in order for fish to spawn, we have to have our major spawning areas with good habitat, they have to be open."

Cheverie said data from the nesting survey will be used to identify areas on rivers where more work needs to be done.

Next spring, staff will survey the number of young fish in the streams. They hope to see this abundance of salmon nests turn into an abundance of fish.