High hopes for P.E.I.-bred horse on heels of a perfect racing season

P.E.I.-bred and Nova Scotia-trained Woodmere Stealdeal has started training again after finishing a perfect season as a two-year-old, setting numerous track records along the way. 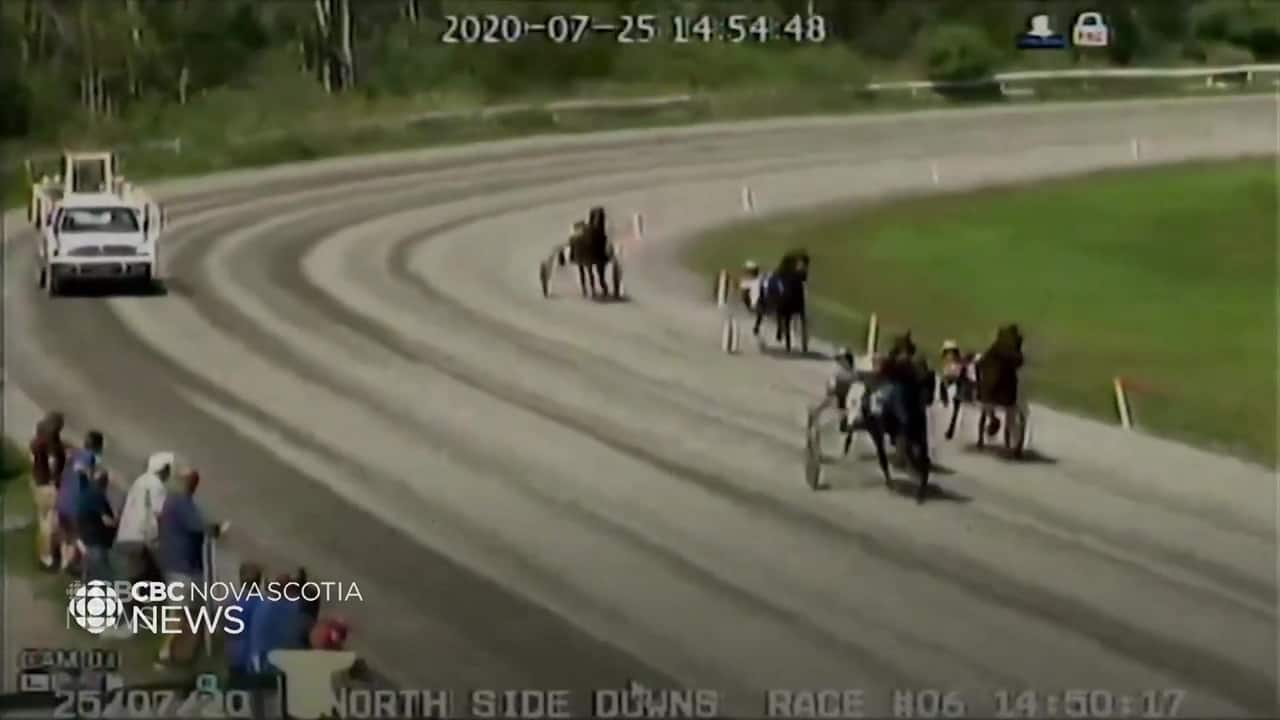 1 month ago
2:27
Woodmere Stealdeal is proving his owners in Truro, N.S., right by rewriting track records. 2:27

Hopes are high for Woodmere Stealdeal, as he heads into the 2021 racing season on the heels of a perfect 13-0 record.

The P.E.I.-bred and Nova Scotia-trained gelding not only went undefeated on the Maritime harness racing circuit in 2020, he also set records at every track where he raced.

"He's a real smart horse. He gets lots of speed. That's why I like him," said trainer Danny Romo, who has spent a lifetime teaching horses how to race. He was impressed by Woodmere Stealdeal's positive attitude and good manners.

"Any time we train him, he goes as fast as we wanted him to go," he said. "You felt like he wanted to do it."

They call him Steal for short, and Romo said from the start the horse was a natural that stood out from the rest.

Steal reminds him of another impressive horse he trained in the early 2000s, Firms Phantom, who wracked up an impressive 28 straight wins as a two- and three-year old.

The son of Steelhead Hanover and Very Ideal Hanover, Stealdeal was bred at Woodmere Standardbreds in Marshfield, P.E.I.

Steal's mother was an impressive horse too, he said, often pacing in the 1:53 range.

She was "a real kind-hearted mare," said Wood, adding that Steal had a similar disposition, along with being "a really smart yearling and very athletic looking."

Even when the race is over, he'll never let anyone pass him.— Bruce Wood, Woodmere Standardbreds

After acquiring Steal in 2019, it didn't take long for owners Bob Sumarah and Kevin Dorey to realize they had something special on their hands.

"After the first race, he looked fantastic," said Sumarah.

Romo trains Steal at Romo Stables in Truro, N.S., and said this horse didn't require much pushing and seems to have a drive to win.

His career debut was July 9 in Summerside, P.E.I., finishing in 1:57.1 and taking the Atlantic Sires Stakes A event.

After winning that first race, he continued to lead the pack, and continued to shave time off his finishes, ending the season with 1:54.1 times at both Red Shores Charlottetown and the Truro Raceway.

Woodmere Stealdeal was driven by Marc Campbell and Clare MacDonald in 2020.

"He's had an incredible season," said Dorey. "He went 13 for 13. He raced at five tracks and he set five track records. And I can't recall any two-year-old in Atlantic Canada ever accomplishing that feat."

"He's a fast, fast horse. And he loves to pass horses," said Dorey. "He loves attention. He loves people."

Wood is pleased and proud of Steal's success and hopes it continues.

He's not always able to catch the races in person, but when he can't he always watches them later online.

"It's pretty neat to see him break record after record."

The impressive season drew $68,646 in earnings, according to Standardbred Canada, including the Atlantic Breeds Crown, Joe O'Brien Memorial and the Maritime Breeders Championship.

When the racing season starts in May, Steal will be competing as a three-year-old.

And hopes are high that he'll continue to set records in 2021.

Wood said Woodmere Stealdeal's desire to win is clear. Even when he wins a race by lengths, instead of slowing down and cooling off right away, he continues to run.

"Even when the race is over, he'll never let anyone pass him."