Why prime ministers and premiers shuffle their cabinet

Keeping allies, maintaining morale and keeping a strong grip on the party are all things that hinge on the success of a cabinet shuffle.

Keeping allies, maintaining morale and retaining a strong grip on the party are all things that hinge on the success of a cabinet shuffle.

It's a process that happens at the provincial and federal level falling on prime ministers and premiers to choose how their fellow politicians rise to, or slide and shift from, a range of portfolios.

And depending on who you ask, each shuffle means something different.

"It's one of the toughest jobs that a prime minister or a premier will have because it's really important that you have a strong and unified team," said former P.E.I. premier Pat Binns.

"Keeping everybody happy is important. If people are disgruntled it doesn't bode well for the team."

Binns has been both the shuffled and the shuffler during his time as an MLA and as the premier of Prince Edward Island.

As premier, most of the time a cabinet shuffle had to do with keeping things fresh for a minister, he said, by switching them around to different portfolios and playing to a politician's strengths.

Shuffling cabinet is something that dwells on a premier's mind from the very first hour on the job, he said; keeping an eye on ministers, seeing how well people are performing and sculpting a strategy around who needed to be moved around and when.

You want to keep your backbenchers thinking … that they have an opportunity in the cabinet.— Don Desserud

"From day one you have to be anticipating that there will need to be changes. You might find that someone is really better at a particular job than someone else," he said.

Don Desserud, a political science professor at UPEI, says moving ministers around is often a healthy measure by a leader that's done to keep people happy and energetic.

"Getting people moved around often gives them new vitality, new spirit and a new enthusiasm. I liken it to a hockey coach shuffling his lines in a hockey game to get his team more motivated," he said.

Although at times in history shuffles have risen from sour, in-party spats that have caused rifts in the ranks.

As a result some ministers have left cabinet — willingly or not.

One of the most notable spats, Desserud said, was between former prime minister Jean Chrétien and finance minister Paul Martin in the early 2000s as Martin had been a rival for the leadership.

In summer 2002, in the second cabinet shuffle for the Chrétien Liberals in a single week, Martin was replaced by John Manley — a move characterizing the infighting between the two at the time.

"There are circumstances where you have two very powerful individuals in government who on the inside are rivals," Desserud said.

"And that can be a case for prime ministers saying 'this person is more trouble than they're worth.'" 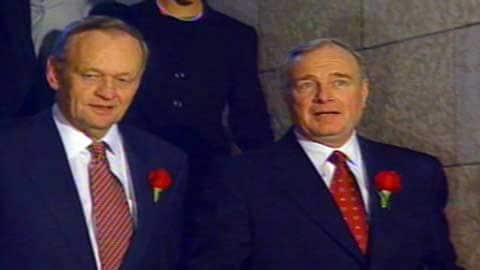 Chrétien and Martin: The feud boils over

'You can get internal dissent'

In Prime Minister Trudeau's cabinet shuffle this week, four new ministers were added to cabinet and about 10 more were shuffled around.

Some of the new ministers promoted to a cabinet position come from the Liberal backbench, and, Desserud said, it's a strategic play by leaders to keep the ranks happy.

"If the door is always closed, they get discouraged and then you can get internal dissent and that can get problematic as well."

Cody hails from Summerside, Prince Edward Island, and is a UPEI History and Carleton Masters of Journalism alum. He joined CBC P.E.I. in July, 2017. Reach him at cody.mackay@cbc.ca