From protests in the streets and yellow ribbons, to a thriving aerospace sector and a new government-owned Slemon Park Corporation, the last few decades have seen a total transformation of the former CFB Summerside. This year, the former base's first private tenant is celebrating 25 years in business.

'The most successful base closure in Canadian history'

The last few decades have seen a total transformation of the former CFB Summerside, from protests in the streets and yellow ribbons to a thriving aerospace sector housed within Slemon Park.

Slemon Park was named for Air Vice Marshall Roy Slemon and was initially the name of the residential part of the base. Later, when the base closed, Slemon Park Corporation came to encompass the entire site: hangars, runways, houses and all.

This year, the former base's first private tenant is celebrating 25 years in business.

Losing CFB Summerside, it appears, has had a silver lining.

Some now call it "the most successful base closure in Canadian history."

It was April 27, 1989 when the bombshell was dropped in the federal budget speech: CFB Summerside was on a list of bases to close.

Within days, committees were struck and delegations from P.E.I. headed to Ottawa to make the case for saving CFB Summerside.

4 years ago
2:08
Reaction on April 27, 1989 to the surprise announcement in the federal budget that CFB Summerside was going to be closed. 2:08

A special task force put together a report showing how the closure would "devastate" the economy of Summerside and surrounding areas.

Prince Edward Islanders took to the streets to rally for the base, with yellow ribbons the symbol of support.

At one point, Premier Joe Ghiz even threatened to "sue" Ottawa over the closure of CFB Summerside.

4 years ago
2:12
Summerside residents take to the streets wearing yellow ribbons to protest against the closure of CFB Summerside on October 16, 1989. 2:12

McDougall to the rescue

At the time, McDougall was an aerospace entrepreneur with years of experience working in the beer industry. He'd even taught high school in Summerside.

I tell people that Don brought the Blue Jays to Toronto and he brought Slemon Park to the Summerside area.— Cliff Campbell

McDougall went to the province with a proposal to turn the base facilities into a private, for-profit corporation.

"I tell people that Don brought the Blue Jays to Toronto and he brought Slemon Park to the Summerside area," joked Cliff Campbell, who worked on the transition with McDougall and became the first president of Slemon Park.

Within months, the federal government had transferred the base, its assets and $15 million to McDougall's company. They were then turned over to the new Slemon Park Development Corporation, which committed to create 500 jobs within 10 years.

The creation of Slemon Park Corporation marked the birth of P.E.I.'s aerospace sector.

"There was no centre — in this part of the world — that was totally dedicated to repair and overhaul of aircraft," explained Campbell. 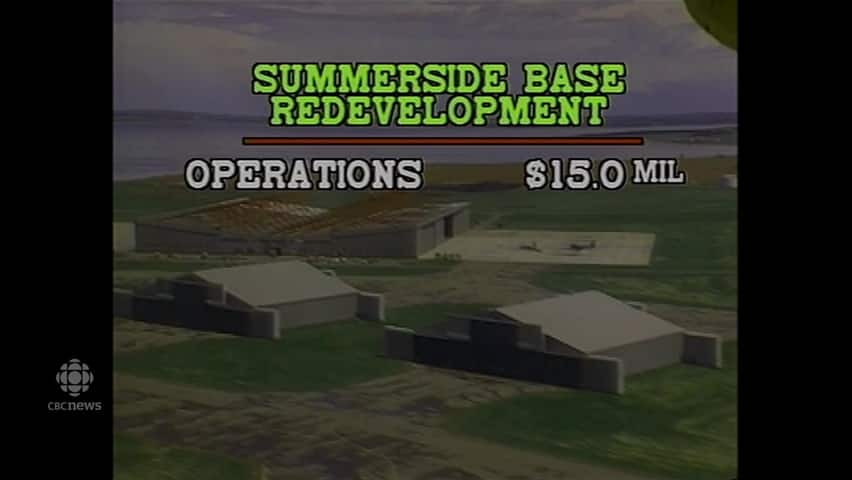 4 years ago
6:27
Kathy Large reports on the new aerospace companies that have moved into Slemon Park in the wake of the base closure. November 25, 1991 6:27

Two firms were wooed to P.E.I. to set up shop at Slemon Park.

Atlantic Turbines Inc. would install engine repair facilities. Bendix-Avelex, a subsidiary of Allied Signal Inc. of New Jersey, now known as Honeywell, was setting up an avionic and repair facility.

Both received financial support from ACOA.

Atlantic Turbines later became Vector Aerospace. Today, Vector is among a dozen companies in the park doing over $400 million in sales annually.

Vector just renewed its lease at Slemon Park for 15 years, and recently landed a 10-year extension of its contract with Jazz, one of the company's biggest customers.

Another way to crunch the numbers: the aerospace centre that was launched on the former base now adds $149 million annually to the P.E.I. economy, with more than 1300 employees connected to the industry.

It seemed Summerside's economic fortunes were turning around, even as the 200 military personnel and their families were leaving.

4 years ago
2:23
On May 6 1991, Summerside residents said farewell with a parade thanking the military volunteers who had been part of their community. 2:23

CFB Summerside's final day was April 1, 1992 — when the transfer was complete.

A blessing in disguise

Almost 25 years later, the consensus is that Summerside is better off today than it would have been had the base remained open.

In addition to the blossoming of the aerospace industry, Summerside also landed the federal tax centre in 1993, which would employ hundreds.

Twenty-seven years later, to see all of these vehicles and people and cars around, our efforts paid off.— Basil Stewart

A 1995 report titled Summerside: Revisiting the Base Closures by Donald Savoie found that, "Summerside never went through the kind of painful economic adjustment that people had envisaged the day after the announcement that the base would close down."

In fact, one senior government official told Savoie that the base closure was viewed by many as a "blessing in disguise" after years of having the closure of the base hanging over Summerside's head.

The saying was that CFB Summerside had now come to stand for "Come From Behind."

'Our efforts paid off'

"We always seemed to be getting double-barreled, if you will," recalled Stewart.

"We'd try to convince the provincial or federal government for more business here in Summerside and it was always, 'You've got the base there, what more do you want?' And then if you try to convince the private sector to expand, well what happens if the base closes? So we seemed to be getting it from both sides."

Stewart frequently drives past both the tax centre and Slemon Park, and recalls the uphill battle it took at times to get to where the community is today.

"Twenty-seven years later, to see all of these vehicles and people and cars around, our efforts paid off," he smiled.