Even with the help from 9 New Brunswick crews, some Islanders could be without electricity into Sunday, P.E.I.'s electric utility Maritime Electric told CBC News Friday evening.

'We could be into Saturday or even Sunday' before power is back across P.E.I. 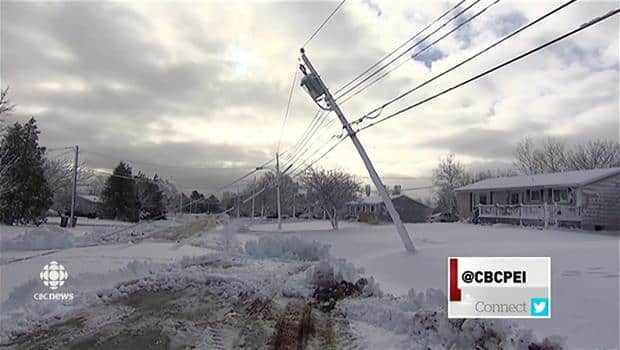 Even with the help from nine New Brunswick crews, some Islanders could be without electricity into Sunday, P.E.I.'s electric utility Maritime Electric told CBC News Friday evening.

As of about 7:45 p.m., there were still about 10,000 customers without power after poles snapped and about 300 lines were downed in the wake of Thursday night's heavy, wet snowfall.

Some 45 poles broke over the course of the storm and its aftermath.

"It's been a very very difficult time for our customers and our crews out there," Maritime Electric spokeswoman Kim Griffin told CBC News: Compass anchor Bruce Rainnie in an interview.

"Our challenges are ... in some cases two, three, four thousand pounds of ice buildup on these lines," she said.

"It's pretty significant ice and snow that's built up on our power lines."

Griffin said Maritime Electric has called in nine trucks from New Brunswick to help its 25 crews already on the job. They'll be working through the night Friday.

When will power be restored?

"Unfortunately, we could be into Saturday, maybe even Sunday, if the current weather stays the same," Griffin said.

She said it's difficult to estimate, and the utility is asking people to prepare to be without power for a while yet.

She said there could also be power outages while they work on the system from Stratford to East Point.

She added Maritime Electric will continue to update its website through the night, and staff its toll-free phone line.

And they got a shout-out on social media for their efforts:

God bless the Maritime Electric workers for making sure power can be restored all over <a href="https://twitter.com/hashtag/PEI?src=hash">#PEI</a> 🙌🏻💡

Just to top it all off

"In addition to this very difficult day for our customers, we've had about 10, 11 calls in the last couple of hours where someone has been calling customers, telling them if they didn't immediately do a pre-authorized Visa and give them personal information over the phone, that Maritime Electric was coming immediately and cutting off their power," said Griffin.

"That is not true," she said, noting it seems to be the same scam the utility heard about last week.