A residential school survivor in P.E.I. says Charlottetown’s John A. Macdonald statue should not be displayed.

'It fills me full of anger and bitterness' 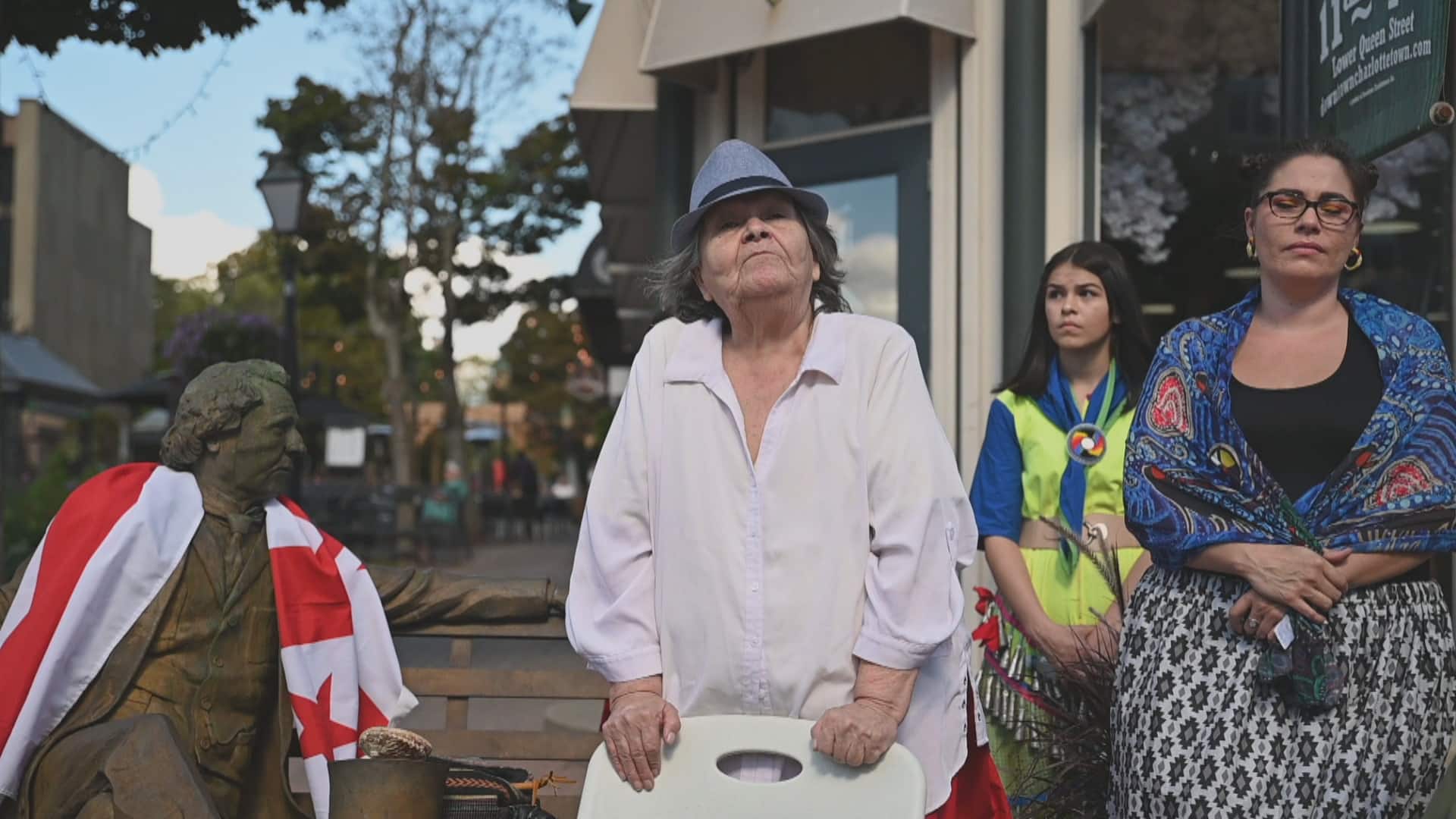 1 month ago
2:05
Marie Knockwood and about a dozen people gathered next to the statue to educate people about John A. Macdonald's history with Indigenous people. Video by Patricia Bourque. 2:05

A residential school survivor in P.E.I. says Charlottetown's John A. Macdonald statue should not be displayed.

Marie Knockwood is a member of the Abegweit First Nation, and grew up in Scotchfort, P.E.I., where she still lives today. She was taken to the Shubenacadie Residential School in Nova Scotia when she was 10 years old, where she says she was was the victim of sexual and physical abuse.

"John A. Macdonald has been a thorn in the side of our people for many, many years," she said.

"It fills me full of anger and bitterness, I get so angry because I know all the problems that he caused my people and me."

Statues of John A. Macdonald have been the subject of debate and protest in recent months.

As Canada's first prime minister, Macdonald is widely regarded as the architect of the residential school system. It is estimated about 150,000 First Nations, Inuit and Métis children were removed from their communities and forced to attend the schools until the last school closed in the 1990s.

"Abducting the children, actually, right from their parents. No matter, you know, how good a parent is, it didn't matter. He was determined to take the children away from the savages," she said.

"It's a statement he made: 'savage' parents."

This spring some called for the Charlottetown statue of Macdonald to be removed. The statue was then defaced with red paint, and earlier this week, a man was charged with mischief after knocking down and dragging the statue.

Charlottetown's city council unanimously voted to keep the statue, but has also struck a subcommittee to look at what can be done at the site to address the complete history. Mayor Phillip Brown told CBC News that the city met with L'Nuey and the Mi'kmaq Confederacy and is awaiting further input.

"I would like to have that statue removed from there," Knockwood said.

"Whoever it is that wants that statue there, I'd like to talk with them. I don't think they know."

This week Knockwood and about a dozen other people gathered next to the statue with drummers and dancers.

"We were there to educate, not to destroy the statue or cause any problems," Knockwood said.

"Things that he did, we didn't even fully understand or know because they weren't teaching that in the schools."

It's when I sleep, when I'm half asleep. These memories haunt me.— Marie Knockwood

The gathering was organized by Knockwood's daughter, Ginger, as a way for her mother to share her story and educate people about Macdonald's history with Indigenous people. Mi'kmaq visual artist Patricia Bourque was also there and documented the event.

The gathering happened to take place while the street was busy with the weekly Queen Street open-air market. Knockwood said about 20 or 30 people stopped to listen and engage.

The Mi'kmaq Elder said though the goal was not to bring down the statue, she does not believe a John A. Macdonald monument has a place on the street in Charlottetown.

"Still to this day, to this very day, the government is kind of like making fun of us," she said.

"I felt like I was doing something about it, I wasn't being silenced."

'I wake up in nightmares'

Knockwood attended the Shubenacadie Residential School for one year.

When the local Indian Agent, the government's representative on First Nations reserves, came to retrieve her the following year, she said she put up a fight and could not be torn from the door frame.

She said after telling the agent and her father the story of what happened to her, it was decided that she did not have to go back.

"I was raped at the residential school. I was beaten every day that I was there. I tried to protect others from getting abused and I've seen a lot of abuse happening and I witnessed a lot of horrible, terrible things," she said.

"They didn't know God, because they wouldn't have done those things to us if they did."

Like many others who attended the schools, Knockwood still struggles with her trauma and flashbacks.

"I wake up in nightmares and it takes a while and I'm able to push that in the back again. But every time I talk about it I think it doesn't bother me. It's when I sleep, when I'm half asleep. These memories haunt me," she said.

Compensation was made available to residential school students who were alive as of May 30, 2005.

"How do you get evidence when you're 10 years old?" she said.

"I wasn't after the money, I was more after wanting our history. They said it would be put out there, an archive or something, so it could be seen."

"I don't know why they have to have that there," she said.

"[He] tried to destroy a whole nation of natives. Not just us, but right across Canada."

Knockwood said she finds healing in sharing her story.

"If they just did a little bit more research on that man, I don't think they'd be very proud to display him like that," she said.

Nicola MacLeod is a reporter with CBC in P.E.I.