Why you shouldn't pick this rare flower

The Lady's Slipper is in bloom, and you won't find many people more thrilled than Donna Martin of Summerside.

Everything you always wanted to know about the Lady's Slipper orchid

If you're out for a walk in the woods or near a damp area, you might be lucky enough to spot P.E.I.'s provincial flower.

The Lady's Slipper is in bloom right now, and you won't find many people more thrilled than Donna Martin of Summerside. P.E.I.

"It's quite exciting. I love to hunt for orchids," says Martin, a member of the Natural History Society of P.E.I.

We asked Martin about her love for the Lady's Slipper.

What makes them so special?

They're beautiful — well, obviously — and they're rare.

"They are hard to find which makes it kind of exciting to go and find them," Martin says. "They're an orchid, which makes them rather unique and special"

Not to mention they actually look like a slipper.

Can you pick them?

Technically, yes, but you'll get the stink eye from Martin and other nature lovers.

"Legally they are not protected but certainly hugely frowned upon," Martin says. "There isn't enough of them to pick to bring them home and throw them on your table to look it."

Plus, it's difficult to replant them, because they rarely survive a change of habitat.

Where can you find them?

There is actually a community in Prince County called Lady Slipper, so surely you could find them there if you look hard enough. But Martin says Brookvale Provincial Park is a sure bet, and along the Confederation Trail in eastern P.E.I.

She has two other places she goes to see them, but won't divulge their locations (see previous question).

"You can usually find them in mossy wetlands and damp areas," Martin says.

There are 12 species of Lady's Slipper, and three can be found on P.E.I. — the Pink Lady's Slipper (named the provincial flower in 1947, comes in white and different shades of pink), the Yellow Lady's Slipper (yellow with maroon spots) and the Showy Lady's Slipper (pink with pure white petals over the pink "slipper."

"The yellow is quite rare on P.E.I.," Martin says.

When do they bloom?

"The pink ones are out right now and they're probably getting close to being done. The yellows were out maybe a week or 10 days ago. And the showy Lady's Slippers are starting to bloom right now," Martin says.

"They're usually in bloom for two to three weeks, sometimes a little longer depending on the conditions because they like to stay wet so if you're in a dry area they don't last as long." 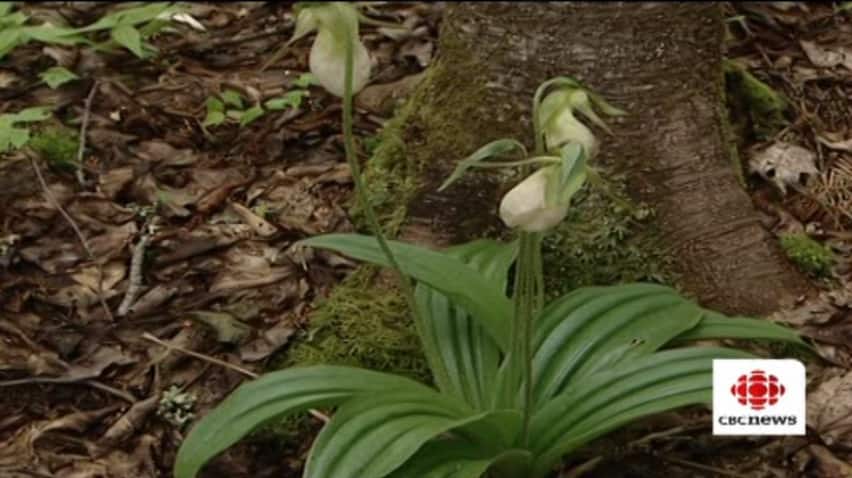 Shane Ross is a former newspaper and TV journalist in Halifax, Ottawa and Charlottetown. He joined CBC P.E.I.'s web team in 2016.