His nickname is Gremlin. Peppermints and carrots are his kryptonite. He's short, lazy, scarred and not in the best shape of his life, but he has a great personality. Oh — and he's earned almost $7.5 million dollars.

Win or lose, the visit to P.E.I. by this senior equine statesman is being regarded as 'a privilege' 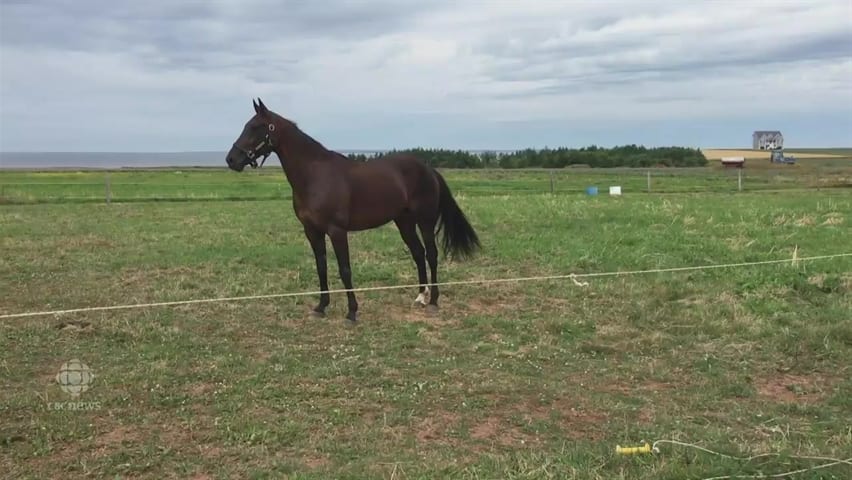 Foiled Again gets turned out in P.E.I. paddock

His nickname is Gremlin. Peppermints and carrots are his kryptonite. He's short, lazy, scarred and not in the best shape of his life, but he has a great personality.

His name is Foiled Again, and he's a 12-year-old standardbred with 88 lifetime wins and a lifetime record of racing a mile in 1 minute and 48 seconds flat.

In the harness racing world, 12 makes Foiled a senior citizen. He's racing Saturday night in heat one of two for the Gold Cup and Saucer — the big race goes next Saturday — against horses half his age.

It's like having Wayne Gretzky in your dressing room.— Darren Trainor, P.E.I. stable owner

Standardbreds are allowed to race through their 14th year. Foiled Again can't be put out to stud, because he's a gelding.

"He's something else, this fella," said Foiled Again's trainer and right-hand man, Shannon Murphy. Murphy is originally from Cape Breton, N.S., but moved to the U.S. and works for the legendary Ron Burke stable in New Jersey.

"We got him as a four-year-old and he's just been grinding it out for the last eight years. He just loves his work."

Foiled Again is staying at a stable in rural P.E.I., training lightly every day and enjoying the sea breeze as he frolics in the grassy pasture.

Although he's small and unassuming — less than 15 hands high and about 1,000 pounds — he has a distinctive look: a large chunk of his left ear is missing. "He did it somehow, but we have no idea how," shared Murphy.

'Not the horse he was'

"Obviously he's not the horse he was two years ago," Murphy said, noting Foiled's age is catching up to him — he's racing slower than he was, which is a mile in one minute and 50 seconds.

What about his chances in the Gold Cup heat? Foiled Again drew the rail position, which is a favoured spot to set the pace. He's sound and seems happy. But as everyone keeps repeating, anything can happen in a horse race.

"He'll show up, they'll know he's in there," said Murphy, calling the horse's odds to win "very good … I love his chances this week."

'He knows the deal'

Foiled has also secured one of the best drivers in the business — Charlottetown's own Marc Campbell, who won last year's Gold Cup with Take it Back Terry.

"He's probably the laziest horse I've ever jogged or trained," shared Murphy, while also calling the horse one of the most intelligent he's met.

He believes Foiled saves his energy for his races. "He knows the deal, he's special," opined Murphy.

"There's never been a horse like Foiled Again before," enthused Kent Oakes, past chair of Standardbred Canada's Board of Directors, echoing the excitement of the harness racing industry to have the sport's biggest celebrity make an appearance.

"He's a warrior," proclaims Oakes, "a remarkable equine athlete," adding Foiled Again showing up to race on P.E.I. is "a pleasure and a privilege."

"It's like having Wayne Gretzky in your dressing room," said Island horseman Darren Trainor, who's hosting the Burke stable, noting, "he's nerve-wrecking to have around, we're always checking on him."

Red Shores is holding a public meet and greet with Foiled Again Thursday at 1:30 — everyone is welcome to come pat him and take a photo.

"We're proud to do it," said Shannon Murphy.

Foiled Again will add $30,000 to his earnings if he takes home the Gold Cup and Saucer title.

And he's not the only Ron Burke-owned horse up from New Jersey who could be a contender: Limelight Beach, a much bigger and fitter horse who has more than $1 million in lifetime earnings, was in the stall next to "Gremlin" and is one of the fastest in the field of 14.

Sara is a P.E.I. native who graduated from the University of King's College in Halifax. N.S., with a bachelor of journalism (honours) degree. She's worked with CBC Radio and Television since 1988, moving to the CBC P.E.I. web team in 2015, focusing on weekend features. email sara.fraser@cbc.ca