This Charlottetown potter's off-season garage studio is a calm refuge

Suzanne Scott owns Village Pottery in New London, P.E.I. Most of the shop's pottery is made in her garage studio in Charlottetown.

This story is part of our East Coast Studios series, a CBC Creator Network project. The videos are an intimate look at how creatives shape their studios, and how their studios shape their work. Milliner Nicole McInnis pitched the series and worked as an associate producer. Misiksk Jadis and Sean Doke produced this video for CBC with footage from February.

In many ways, Suzanne Scott's days are pretty typical for this time of year.

Between November and mid-April, she creates pottery in her Charlottetown garage studio. These pieces eventually make their way to her New London shop, Village Pottery.

"For me, it hasn't felt like life is very different, other than not being able to kind of leave my property and see my friends and family," said Scott, who self-isolated after returning from Saint Lucia a few weeks ago.

Her studio is a place of refuge.

"It's like a lifesaver, I would say," Scott said. "It's keeping me sane just to have a place to leave and spend a few hours focusing on making things with my hands." 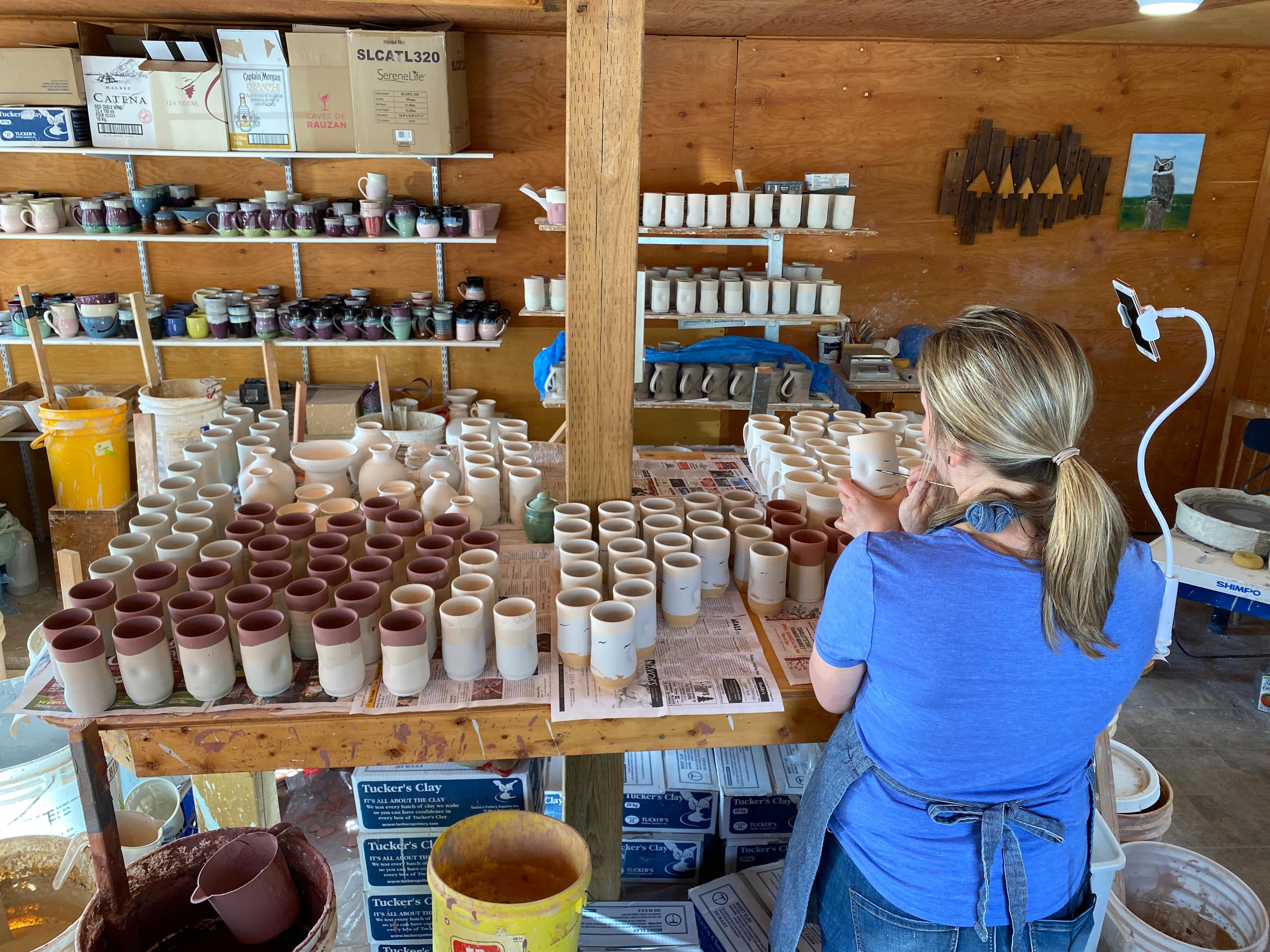 10 months agoVideo
3:01
Suzanne Scott turned her Charlottetown garage into a pottery studio around five years ago. 3:01

Scott's mom Daphne Large started Village Pottery in 1973. She's still involved in the business, along with Scott's dad and brother. They usually work part-time, along with one other employee.

Now, Scott's creating alone, which means a lot of work in a time of uncertainty around COVID-19.

"Mom doesn't even know what to tell me," Scott said, who's known as the Potter's Daughter online. "Unchartered territory."

Scott is the team captain and event planner for the Etsy Artisans of P.E.I. Normally, she'd be winding down her Etsy shop to get the New London location ready, but this spring she's been adding as much as she can to her online business.

Scott also runs an ice cream shop and café called Potter's Parlour next to their pottery shop in New London.

"We depend on the tourists 100 per cent," said Scott. "Our online sales will never be able to sustain how we usually operate."

Scott said she hopes things will return to normal around mid-June. It could be sooner or longer, she said, but she thinks that's what businesses are basing their ordering and work on right now.

In the meantime, she's hearing from her online community.

"I'm getting a lot of people right now ordering something because they're not sure whether they'll be able to come to P.E.I. or not, or they just want something comforting."

That's comforting for Scott, too.

"They'll send a little message saying you know, I can't wait to just sip on my coffee and dream of P.E.I. while I'm at it."

With files from Misiksk Jadis and Sean Doke for CBC, and Natalie Dobbin