If you shopped in craft stores in P.E.I. this summer, you may have noticed a new line of soy wax jar candles with titles like Get Lit, Bite Me, and Blood, Sweat and Beards.

Some products 'push the limit,' owner admits, but help set the brand apart

If you shopped in craft stores in P.E.I. this summer, you may have noticed a new line of soy wax jar candles with titles like Get Lit, Bite Me, and Blood, Sweat and Beards.

The titles don't denote the scent (that's on a sticker on the bottom), but are rather fun, motivational or sassy quotes that catch buyers' attention.

"Minimalist and lifestyle home goods are really in right now and we kind of fall in that line," said Megan Grady as she poured clear yellow soy wax into glass jars with wicks to harden. Some of the quotes, Grady admits "push the limit," but have set their candle brand apart.

She and her husband Sage Grady started Lighters Candle Company in their kitchen in April with a personal investment of $5,000, selling the jar candles for $16 each.

"We started doing little small stores around P.E.I., and then we got a call from the buyer at Homesense and Winners Canada and we suddenly needed more space!" Grady smiles.

The Gradys did a test order of 2,000 candles for the giant home goods retailer, delivering it in September — 80 per cent of it sold within a week, Grady said, so the company ordered 8,000 more. 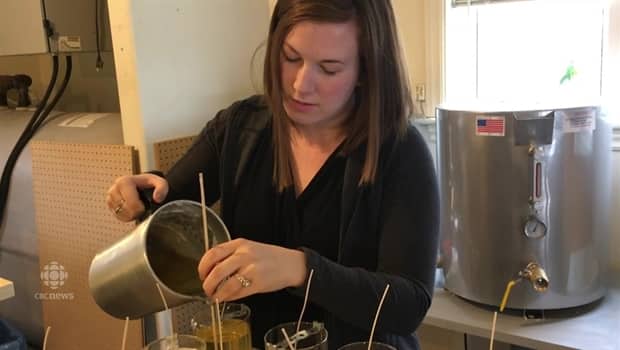 The Gradys had to ramp up quickly — they bought another wax melter, ordered glass jars by the thousands instead of by the dozens, and moved their little operation to a family member's garage.

For the past month, they've been working until midnight every night to fill the order, creating about 400 candles a day while taking turns looking after their two girls, three-year-old Olivia and one-year-old Della.

"It's pretty amazing, we've always wanted to turn our craft into a career and it happened really quickly for us — we're really blessed and thankful," said Grady.

Grady, who has a degree in sociology and anthropology, had been a stay-at-home parent for the last several years, and her husband left his job as an aerospace technician to devote to the candle company full time.

The couple recently competed with several other new Island businesses for one of several $25,000 grants through the P.E.I. government's Ignition fund.

"We felt really good after our pitch, we felt like if we didn't get it, we had given our all and we were OK," Grady said.

When they received the call a few weeks later that they'd won, Grady said, "We were so excited that we got the money and then we could start looking at all the other options to get to where we needed to be in the next coming years."

They plan to spend most of the grant money on marketing with an eye to landing a deal for U.S. distribution.

Grady also accessed a Skills P.E.I. program for those on employment insurance who want to start their own businesses, and received a $1,000 grant to help write a business plan.

What's next for the company?

Grady has done research which she says shows candles are going to remain a popular home good, but adds she and her husband plan to stay on top of trends — adding new fragrances, labels with new quotes, even colours.

They plan to hire an employee next spring.

"I'm really excited of where this is going to take us," Megan said, noting the company is receiving emails daily from people placing orders.

Sara is a P.E.I. native who graduated from the University of King's College in Halifax. N.S., with a bachelor of journalism (honours) degree. She's worked with CBC Radio and Television since 1988, moving to the CBC P.E.I. web team in 2015, focusing on weekend features. email sara.fraser@cbc.ca