A traditional birchbark canoe that was built on P.E.I. was launched from Skmaqn–Port-la-Joye–Fort Amherst National Historic Site on Tuesday.

'Once you see a canoe and see how it's built, it really makes you feel good' 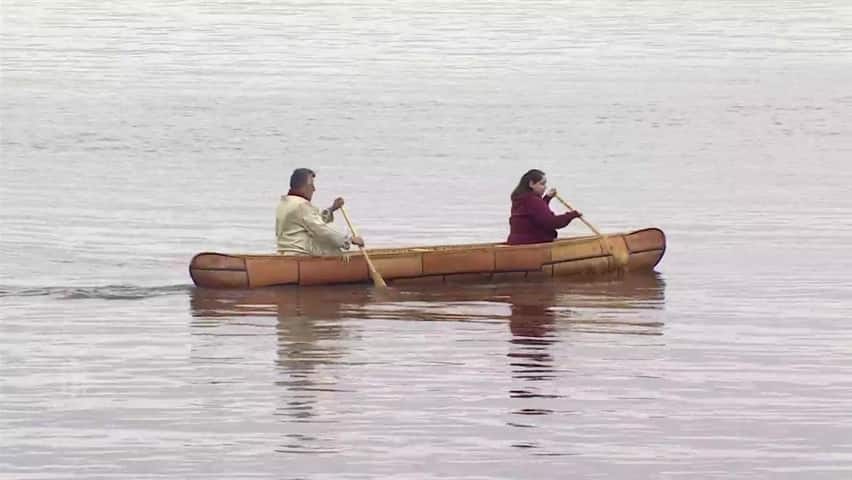 A piece of traditional Mi'kmaq craftsmanship made its maiden voyage in Charlottetown Harbour on Tuesday from the Skmaqn–Port-la-Joye–Fort Amherst National Historic Site.

The birchbark canoe was built as part of a partnership between the Mi'kmaq Confederacy of P.E.I. and Parks Canada.

Master canoe builder Todd Labrador spent six weeks in the fall of of 2018 working on it with the help of Mi'kmaq elder Junior Peter-Paul and others.

They mostly worked at the historic site, where they could interact with the public and raise awareness of the Mi'kmaq culture while they built the canoe.

"It was really special," said Labrador. "Took me a lot of years to figure out how to build a canoe, but now to be able to build them and to share with other communities, makes you feel good."

As part of the project, the canoe builders travelled to Lennox Island and Scotchfort so community members could watch them in action.

They finished the canoe in late October but were unable to do the official launch until this year.

They were hoping to get it into the water in September, but post-tropical storm Dorian delayed the date.

Labrador returned to P.E.I. for the official launch Tuesday, even bringing a second 19-foot birchbark canoe for the event.

It was larger, designed for travelling through ocean waves, something Labrador noted as he crossed over the Confederation Bridge on his way in.

"You could look down and see the water and it was very rough," he said.

"Very, very strong people they were and also very brave people to do that."

The P.E.I. canoe glided out with Junior Peter-Paul and Jessica Francis, one of the heritage presenters for the historic site. Labrador was joined in his canoe by community member Adam Jadis.

They did a small lap to test out the canoe before returning to shore.

The canoe will now be used for educational events and demonstrations as it will be a living piece of history.

It also will be taken out on the water as often as possible to keep it in good condition.

"Once you store them away if they dry out, everything becomes brittle," Labrador said. "It's like your skin. If your skin becomes very dry, it'll crack. The best thing for a birchbark canoe is water."

Labrador said he hopes that having the canoe here on P.E.I. will help inspire other future canoe builders.

"Would really be nice to see every community have their own canoe," he said.

"Brings pride back to our communities and once you see a canoe and see how it's built, it really makes you feel good, and think about the knowledge that our ancestors had was amazing."

John Robertson is a multi-platform journalist based out of Charlottetown. He has been with CBC News for more than a decade, with stints in Nunavut, Edmonton and Prince Edward Island. John.Robertson@cbc.ca Twitter @CBCJRobertson Instagram @johnrobertsoncbc

With files from Randy McAndrew