In the not-too-distant future, you could soon be recognized by the way you walk — not just visually, but by the pressure of your footsteps in hidden floor sensors.

'These things could be embedded inside a floor and recognize you' 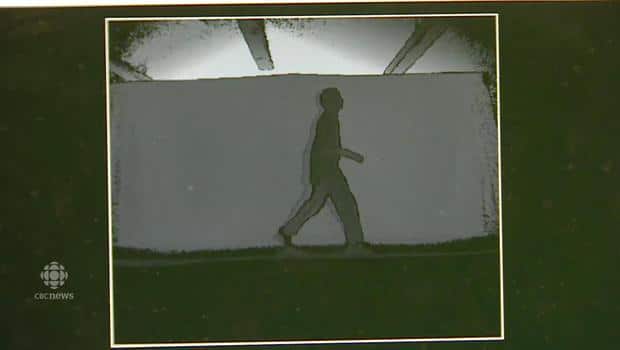 Walk this way! Identifying people by the way they walk.

In the not-too-distant future, you could soon be recognized by the way you walk — not just visually, but by the pressure of your footsteps in hidden floor sensors.

The way that we walk is a lot like a fingerprint, it's quite unique.— Patrick Connor, ViTRAK

P.E.I. company ViTrak is a research and development company that already has a federal government contract to supply its gait analysis system, called Stepscan, to three Canadian hospitals. It's now doing further research to recognize people by their gait.

"What we're doing here is collecting data for a research project that we're working on. And that is, we're trying to identify people by the way they walk," said ViTRAK's Patrick Connor.

Connor set up shop in the lobby of the performance hall at Holland College in Charlottetown this week. He's asking students and staff to walk on sensor pads in front of a green screen, and videotaping the results.

"The way that we walk is a lot like a fingerprint, it's quite unique to each individual and quite consistent — but different between people," said Connor.

Much of the current research is based on video alone, he said.

"But we're really looking at the underfoot pressures that you place as you walk across, so these things could be embedded inside a floor and recognize you."

You might not even know the pressure-sensing tiles are there.

"We're looking to see if we can improve the state of the art, and perhaps even come up with a product that will be used in security operations."

In collaboration with Veteran Affairs Canada, ViTRAK's Stepscan gait analysis flooring system is being used by rehabilitation specialists at Sunnybrook hospital in Toronto, Ont., the QEII hospital in Halifax and Sainte-Anne-de-Bellevue Hospital in Quebec to help assess mobility-impaired war veterans, according to the company's website.