Get ready to see more floppy-eared dobermans and long-tailed poodles. It's will soon be against the law to have any cosmetic surgery done on your pets on P.E.I. 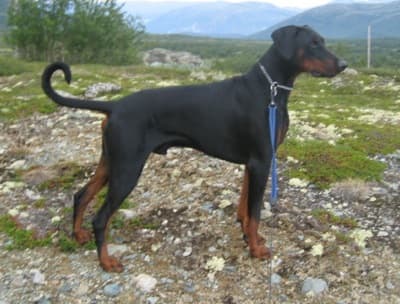 Island Morning6:51Cosmetic surgery on dogs outlawed
Mitch Cormier talks with Dr. Gary Morgan of the PEIVMA and Bill Kendrick of the Abegweit and Lady Slipper Kennel clubs about a statute outlawing cropping dog ears and tails. 6:51

Get ready to see more floppy-eared dobermans and long-tailed poodles. It will soon be against the law to have any cosmetic surgery done on your pets on P.E.I.

The new rules are part of the Animal Welfare Act, adopted in July by the P.E.I. Legislature. It outlaws cropping ears of and docking tails of dogs, horses or cattle.

It's a practice vets on the Island ended five years ago as unethical conduct. The new regulations come into effect in the new year.

"There's no therapeutic benefit or medical reason to perform cosmetic surgeries. So it really flies in the face of our ethical commitments to animals," said Dr. Gary Morgan, registrar of the PEI Veterinary Medical Association.

P.E.I. will become the second province in Canada to outlaw the practice altogether. It goes a step further, even if you can find someone to dock your dog's tail or crop its ears you could end up being fined or even face jail time.

"It states that it's against the law for anyone to perform or permit to be performed cosmetic surgery on an animal," said Morgan.

"It broadens the responsibility to the entire public, which I think is a most appropriate thing to do."

The new act has caught many off guard, especially those involved in showing dogs.

"Certainly nobody preparing the legislation ever spoke to anyone at the Lady Slipper Kennel Club or the Abegweit Kennel Club," said Bill Kendrick who speaks on behalf of clubs.

"It's not something we were aware of so internally we never discussed it as a club,"  added Kendrick.

In an email to CBC News the province of P.E.I. said it did talk to a number of animal welfare organizations in preparing the legislation, including the Veterinary Medical Association,  Sir James Dunn Animal Welfare Centre at the Atlantic Veterinary College and the PEI Humane Society.

The province said the act was available publicly from December of last year to the time it was approved over the summer, and that would have been the time for the public to speak up.

It's a dilemma for dog owners who are used to seeing dogs look a certain way, one dictated more by breeder groups and kennel clubs than genetics.

"I think it's imprinted in our society that that's what they're supposed to look like," said Morgan.

"Public pressure will determine that the breed associations will alter the standards back to the natural state."

"The standards for many breeds do specifically require, particularly tail docking, which was done for legitimate reasons to prevent dogs tails from being damaged if they worked or if they were sporting dogs while they hunted in the underbrush," said Kendrick.

Kendrick said kennel clubs in many European countries have reverted back to the natural look as the breed standard.

Kendrick said with the legislation passed it will be up to each breeder to determine if they ignore the law to keep up with the standard. "Each breeder will now have to take a look at that, and make a determination on how they proceed."