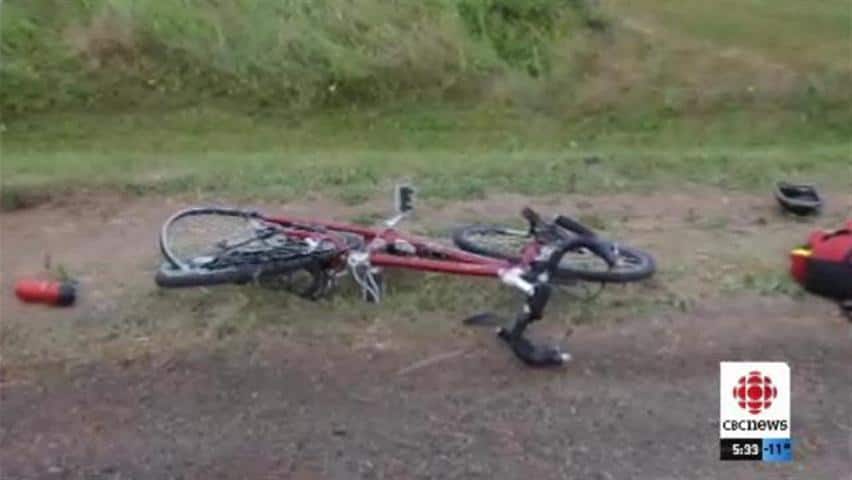 8 years ago
2:29
A PEI man who pleaded guilty to a drunk driving crash that killed an Edmonton woman was sentenced to 6 years today. 2:29

Moase had previously pleaded guilty in P.E.I. Supreme Court to the charge.

At a sentencing hearing on Friday, the court heard Moase had almost three times the impaired limit of alcohol in his blood on July 14 when he struck 63-year-old Elizabeth Sovis, who was riding a bicycle on the highway near Hunter River.

Sovis was on a cycling holiday from Edmonton.

Penalties have been too low, says Justice

Penalties for drinking and driving on P.E.I. have been too low, said Justice John Mitchell as he read the sentence, and out of step with the rest of the country.

Mitchell said Moase had done little to address his long-time alcohol problem. Moase has four previous impaired driving convictions. He is now in Alcoholics Anonymous and is attending church fellowship in jail.

In addition to the six-year sentence, Moase is banned from driving for life.

In an agreed statement of facts produced for the sentencing hearing, July 14 was described as a warm, humid day. The road was dry and there were no issues with visibility.

Moase's van did not brake, steer or accelerate prior to the collision. Sovis, who was cycling with her husband, died at the scene.

Police noticed Moase was unsteady on his feet after the accident. They found a half-empty 1.14-litre bottle of vodka in his van and smelled alcohol on his breath. Subsequent breathalyzer tests came back with a reading of 220 milligrams of alcohol per 100 millilitres of blood.

No shoulder on the highway

In a victim impact statement Sovis's husband, Edmund Aunger, expressed the depth of the loss of his wife of 35 years, saying he had loved her since they were in grade seven together.

"Her love gave me joy and hope and strength," he wrote.

Aunger said Moase bore a heavy responsibility for the death, but he did not stop there in laying blame.

"Prince Edward Island has actively promoted itself to cyclists as a welcoming holiday destination, but it has failed to provide them with travelling conditions that are safe," he wrote.

Aunger noted that he and his wife were always careful to use cycle-friendly routes when on holiday. He noted she had, on an earlier portion of that July trip, refused to cycle on some highways that did not have a paved shoulder.

The couple had used the Confederation Trail earlier that July 14 afternoon to cycle to Hunter River. The final leg of their journey, to a bed and breakfast in New Glasgow, north of Hunter River, led them on to Route 13. The 10-kilometre stretch of road has no paved shoulder. In the summer months it is one of the busiest stretches of highway in the province.

Aunger said he and his wife relied heavily on a cycling guide produced by the province to plan their holiday.

"Nowhere does the province warn that Route 13, like other suggested highways, has no paved shoulders and presents a serious danger for cyclists," he wrote.

Aunger said disputes regarding whether a drunk driver or a dangerous road was to blame for the accident are not constructive. Both were contributing factors, he said, and both must be addressed.