Popularity of backcountry skiing worries some in industry

Sales of backcountry ski equipment are at an all-time high, but experts worry that many of the people who are purchasing the gear may be getting in over their heads.

Experts worry many backcountry skiers are getting in over their heads 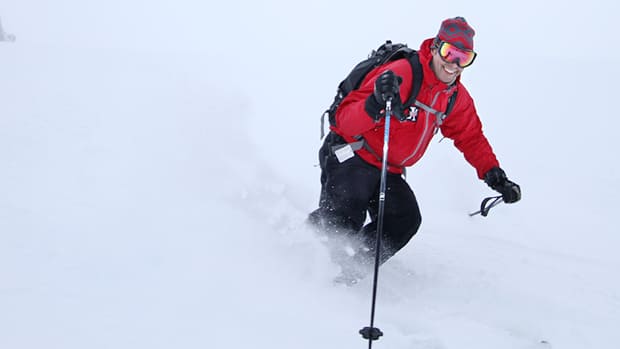 8 years ago
2:37
The lure of fresh snow may be putting inexperienced skiers in over their heads. 2:37

Powder snow is the holy grail for skiers, and now more than ever, people are leaving the boundaries of official ski areas and entering backcountry terrain to find it, say the guides and retailers who work in the ski industry.

"If you can't get fresh snow at a resort, the message is: step out of bounds to get it," says John Irvine, director of sports marketing for Mountain Equipment Co-op (MEC), one of Canada's largest outdoor equipment retailers.

MEC reports that sales of backcountry ski equipment are up 40 per cent at the start of the 2012-13 season, hinting at an opening floodgate for what was previously a fringe sector of the sport.

Irvine says the rush into the backcountry is the product of better equipment and the seductive marketing messages used to sell that gear to powder-hungry skiers.

MEC supports the Canadian Avalanche Centre (CAC) — a backcountry safety organization on which Irvine is a board member — through sponsorship of its avalanche skills training course, but he stresses that responsibility for safe conduct in the backcountry is up to the individual.

While new equipment is increasing the accessibility to powder snow, it's also increasing the chances that would-be backcountry skiers and snowboarders will find themselves in over their heads.

A recent example of the risk is that of Sebastien Boucher, a 33-year-old snowboarder who ducked out of bounds while boarding on Cypress Mountain in West Vancouver in December 2012. He was lost for two days before rescuers found him.

Canadians aren't the only ones with a growing interest in backcountry skiing. In the U.S., online gear-seller Backcountry.com reported a similar spike in sales as MEC, with a 43 per cent bump in categories such as touring bindings, boots and avalanche beacons.

"After six minutes [under the snow], you're toast, so flotation is your best bet of survival in an avalanche," says Backcountry.com purchasing manager Hud Knight.

According to Knight, his company spent about $500,000 on wholesale avalanche survival equipment in 2013, an impressive rise from the roughly $10,000 in 2010, the year the avalanche gear category was introduced.

Knight, like his Canadian counterpart at MEC, attributes the rising popularity of backcountry skiing to improved equipment that makes it easier to reach powder snow.

"Now, you can get away with having just one setup [skis, boots and bindings] that can handle the demands of today's freerider," says Knight.

"Freeride" is the term used to describe the style of skiing that is neither purely downhill nor freestyle — with its combination of jumps and technical skiing — but a mash-up of these two disciplines that is increasingly performed on the variable backcountry terrain.

The term is also used to label the new equipment and clothing that have cropped up to outfit skiers who want gear that enables them to ski in all conditions, take jumps and float through powder.

Freeride represents the current state-of-the-art standard that many ski companies are keen to deliver.

Technological advances in material and design, along with input from a dedicated cadre of sponsored professional skiers chasing deep snow farther into the wilds, have pushed gear manufacturers to improve alpine touring (AT) equipment.

More than ever before, skiers can expect both downhill-style performance and the ability to tour into the backcountry thanks to new of boots and bindings that are lighter, stronger and, ultimately, more comfortable.

"Every alpine company makes an AT binding now," says Knight.

Ski boots with a walk mode are becoming the norm. Skis themselves have evolved, too, and come with wider platforms and in shapes designed with powder snow in mind.

Backcountry no longer a no man's land

With the wider proliferation of AT gear, the traditional barriers that kept the backcountry a relative no man's land for decades are disappearing, making it easier for less-experienced skiers to leave the confines of the ski resort and move into wild terrain.

"Does this mean people will get in over their heads? Yeah, probably," said Knight.

"The number of people skiing in the backcountry now is shocking," Reid said. "The question is, are they going more or less informed than they used to?"

Reid is the president of the Association of Canadian Mountain Guides and has spent 23 years taking clients on mountain expeditions all over the world. Reid says his home range is one of the best he has encountered, offering world-class terrain for seasoned backcountry enthusiasts, as well as those just getting into the sport.

"There are few other places where you can ski across half a dozen glaciers and be back to town, all in a day trip," he said.

But it's precisely that ease of access that gives Reid pause.

The bottom line on safety while backcountry skiing, however, has not changed.

"You just don't go unless you're informed," Reid says.

"We border some terrain that is very accessible, and people get into some monkey-see-monkey-do," says Lon Flath, a veteran ski patroller on Blackcomb Mountain in Whistler.

The ski area's proximity to Garibaldi Provincial Park — one of the region's most popular backcountry destinations — has given rise to so-called sidecountry access. Sidecountry generally refers to terrain that is made more accessible by nearby ski lifts, but that still has to be reached via short hikes or tours that cross the official ski area boundary.

Whistler boasts some of the best near-resort backcountry skiing in North America, and a highly visible gate reminds users that if they cross beyond the resort boundary into unpatrolled terrain, they are responsible for their own safety. The resort even offers single-ride lift passes at a reduced price, aimed at backcountry skiers who would otherwise have to trudge up the mountain to find the best alpine terrain.

The passes are a popular option, but just how popular is hard to assess.

No data is kept on the number of skiers accessing Garibaldi (or any other park in B.C.), and the number of single-ride/backcountry access tickets is a trade secret — information reserved for shareholders since the resort became a publicly traded company in November 2010.

Anecdotal evidence puts the number of backcountry skiers slipping off the resort at Whistler and Blackcomb mountains at an all-time high.

Flath, like many others who earn their living on the mountain, is concerned that the permeability of ski area boundaries, despite the best efforts of staff to patrol and mark them, will result in more and more inexperienced or unlucky skiers getting hurt or killed.

Skiers who want to dip into the sidecountry but may or may not have the equipment or knowledge to do so safely "see experienced people going in that direction, and they make some assumptions," Flath said.

"Those people can get into some bad predicaments."

And when things do go wrong, it's often Flath and other members of the ski patrol who tend to the injured skiers.

"We aren't in charge of the backcountry, but we have a duty of care," Flath said.

But the backcountry does not have to be strictly off limits — at least not for those who have the skiing ability but perhaps just lack some of the specific skills and know-how necessary to travel through complex, avalanche-prone terrain.

Extremely Canadian, which runs ski clinics and guided tours into the backcountry near Whistler, is for the first time in its 16-year history guiding clients outside the ski area boundary, says the company's owner, Peter Smart.

"Without the knowledge, you're crazy not to go with a guide," he says.

"People are starting to refer to out-of-bounds as 'sidecountry,' because they don't want to commit to being backcountry skiers, but it should all be treated the same."

One area that does monitor backcountry ski use is Glacier National Park, which lies in the Selkirk and Purcell ranges of the Columbia Mountains near the B.C.-Alberta border (and is distinct from the U.S. Glacier National Park in Montana). Rogers Pass, an area within the park that served as a mountain pass for the Canadian Pacific Railway from 1885 to 1916 and is a national historic site, is a mecca for backcountry skiers and requires all visitors to purchase a National Parks pass to enter. Backcountry skiers must also obtain a free permit before venturing into areas in which explosives are used for avalanche control, while a voluntary registration system is intended to cover other popular ski zones in the area.

The Canadian Avalanche Centre in Revelstoke, B.C., located near the western edge of the park, says backcountry use has increased 124 per cent since 2009. Last year, the park registered 16,663 permits compared to 7,445 in 2009.

The centre's acting director, Karl Klassen, a backcountry skier and guide himself, knows about skiing safely in the backcountry and is a regular visitor to Rogers Pass.

"Anybody who's been in the business this long has had a close call or two," he said.

Klassen has worked as a guide and avalanche forecaster for 35 years and believes backcountry skiing should not be considered reckless behaviour.

It says registration for its entry-level avalanche safety training course has been rising along with the number of people skiing the backcountry.

With the right training, backcountry skiing can be enjoyed safely, says Klassen, and the benefits are legion.

"You're out breathing fresh air in a pristine environment," he said.

"Canada is one of the great alpine nations, and most people don't even know it. Anything we can do to promote the benefits of a healthy lifestyle in the mountains is really important.

"Going into the mountains, like anything else in life, carries risks. You need to manage those risks."