'I felt like an object': Women behind shocking Chiarelli report tell their stories

The two formal complainants whose testimony led to the integrity commissioner’s damning report on Ottawa Coun. Rick Chiarelli’s conduct spoke to CBC News about the toxic work culture in the office, why they stayed and what they would like to see happen now.

Warning: Some readers may find certain details offensive or upsetting

When Stephanie Dobbs sat down for her second interview for a job in Ottawa Coun. Rick Chiarelli's office back in 2015, she says he pressured her to tell him either the worst thing she'd ever done or her deepest secret.

The College ward councillor justified the question by saying that during an election campaign, his opponents would try to dig up dirt on his staff, and he wanted to be prepared.

"He's trying to frame it as he wants to protect you, and he has your best interests [at heart]. And he creates this almost creepy-pimp-uncle kind of relationship with you," Dobbs told CBC News in an exclusive interview.

Dobbs said that Chiarelli told her that his current office manager had shared her biggest secret, so Dobbs figured if she wanted the job, she'd have to say something.

"What I chose to tell him was about an assault that had happened to me a year previously," Dobbs said.

The sexual assault had occurred at her former workplace, she told Chiarelli, so she really needed a new job.

"My family didn't even know about that."

Dobbs is one of two formal complainants whose allegations led to the shocking 90-page report filed Friday by Robert Marleau, the city's integrity commissioner.

With the help of an investigator specializing in workplace conduct — as well as the testimony of 11 witnesses and dozens of pages of documentary evidence — Marleau found Chiarelli's behaviour to be "a shocking and astounding failure to treat complainants with the respect they were due."

A municipal councillor cannot be removed from office for bad behaviour. Marleau has recommended the most serious sanctions available to him, including withholding an additional six months' pay and kicking Chiarelli off committees. Council will vote on these proposed sanctions later this week.

Chiarelli has denied all allegations and declined to comment on the most recent report. He is challenging the integrity commissioner's jurisdiction in court.

This is the first time that Dobbs and the other formal accuser — known as "Complainant No. 1" in the report, and whom CBC is not naming because of her concerns about finding future employment — have spoken openly about their experiences in Chiarelli's office.

Both had promised the integrity commissioner they would keep the details of their grievances confidential until the report was made public.

The two complainants' time in Chiarelli's office never overlapped and they say they don't know each other. But the experiences they speak about — feeling sexually objectified, fearing for their jobs, taking medical leave due to the stress — bear a striking resemblance.

When Dobbs showed up for her first interview, Chiarelli had a photo on his cell phone of her dressed as the Final Fantasy video game character Yuna, in an outfit with a plunging neckline.

"He asked me, 'Do you know what can draw a man from across the room?' And I looked at the photo and I had no idea what he was driving at," recalled Dobbs, who once enjoyed dressing up in costumes for events like Comic-Con.

She tried to laugh off the comment, immediately saying she'd never feel comfortable not wearing a bra. 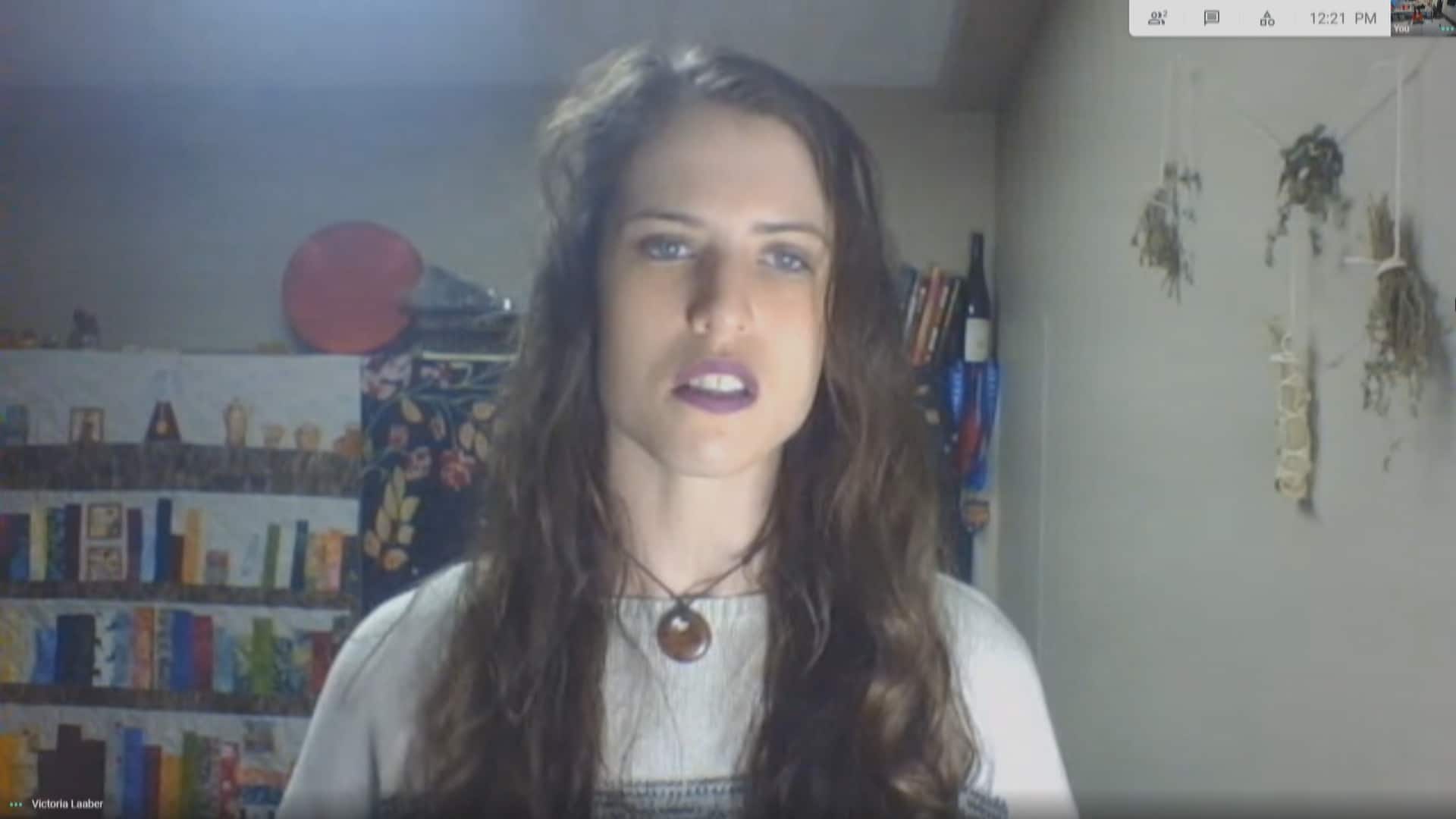 3 months ago
0:50
Victoria Laaber, a former staffer who described a toxic work environment in Coun. Rick Chiarelli’s office, says elected officials should face steeper consequences in serious cases of misconduct. A municipal councillor cannot be removed from office for bad behaviour, though the city’s integrity commissioner has recommended sanctions. 0:50

But that didn't stop Chiarelli from commenting on her body over the next two years. The councillor had another picture of Dobbs in a female Cyclops costume that revealed her midriff, and he'd show it to others. He would also often comment on how much men hit on her.

"At the time, because I had this warped relationship with him, it was like a sense of pride for me," Dobbs said. "That now disgusts me."

She said he told stories at work about sex, including one about a former staffer who went on volunteer-recruiting missions in bars and danced so close to one man that he ejaculated into his pants — a story Dobbs doesn't even believe, as she's heard Chiarelli attach it to two different people.

Dobbs said Chiarelli would also talk down other employees behind their backs, saying they were incompetent or couldn't be trusted. She said Chiarelli would shame another staffer — Brittany Lees, who told her story to CBC last year — because she had gained some weight and wasn't getting enough attention from men. 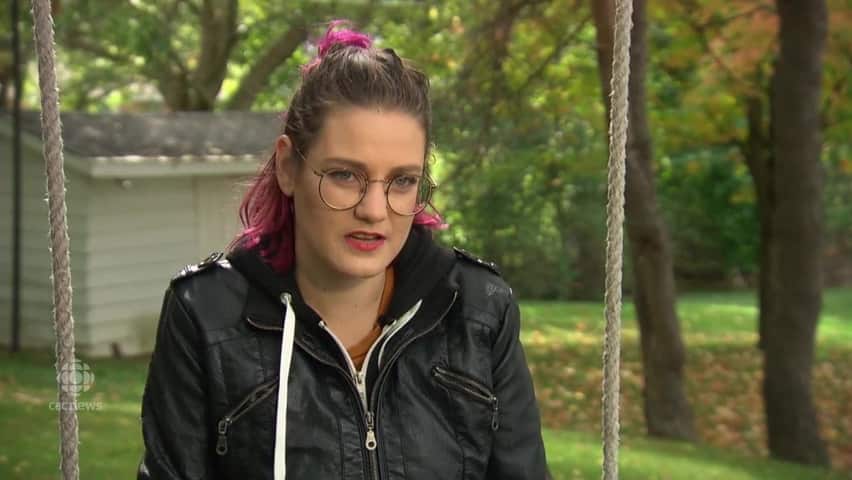 1 year ago
0:45
Brittany Lees says Coun. Rick Chiarelli showed her and another colleague a picture on his phone of a staffer wearing a sheer top with no bra to a public event. Chiarelli has denied this allegation.  0:45

Dobbs said she felt badly for Lees, who was made the scapegoat for everything that went wrong in the office. But a part of Dobbs was also relieved that she wasn't the one receiving the brunt of the blame.

During that time, Dobbs's health suffered. By September 2017, she said, she was put on a medical diet in an attempt to figure out what was wrong with her.

"In October of that year, I was suicidal," she said. "I just didn't care anymore. I felt like nothing mattered because I had just seen nothing but really, really awful sides of everything."

Dobbs said she was conditioned to believe that she couldn't trust her colleagues or complain to the city because it would endanger future opportunities. Leaving didn't seem like an option: she hadn't finished her degree, had a mortgage to pay and the councillor was always saying how he would help her get back into Carleton University.

She's back at school now, but Chiarelli never offered any assistance.

3 months ago
1:11
Stephanie Dobbs, one of the formal complainants in the integrity commissioner’s report, says she was subjected to inappropriate sexual comments from Coun. Rick Chiarelli while working in his office. 1:11

Complainant No. 1 first met Chiarelli in 2018, when she was bartending at Ralph's Sports Bar and he was thinking about having a post-election gathering there.

He later contacted her about a possible job, one she assumed involved hiring her to work at a party for the upcoming holidays.

Considering the meeting was at a restaurant at 9 p.m., it never occurred to her it was an actual job interview until well into their conversation. But she was thrilled at the thought of working at city hall.

"It's not that I had this passionate interest in politics, but to get a foot in the door at city hall is definitely something that you don't sneeze at," she said. "So I took it as an opportunity to sort of change the direction of my life."

The woman, who is also involved in a separate workplace harassment investigation related to working for Chiarelli — the results of which will not be made public — decided to embrace her new life with "honesty and transparency."

At her second interview, the woman told Chiarelli she'd been an exotic dancer before moving into the restaurant business.

"I just didn't want him to ever be sort of blindsided," she said. "He was making it seem [like] he always had people looking to attack him in some way."

She came to feel, however, that Chiarelli used that information to treat her "in a way that was pretty demeaning."

At the second interview, she said Chiarelli described a bizarre volunteer-recruitment strategy in which he wanted her to go to bars to pretend to pick up men.

While she never did it, she said he talked about it frequently, including in a text found in the 283-page appendix of supporting documents in the integrity commissioner's report. Chiarelli also once kept her at the bar of the restaurant Tailgators until 2 a.m., buying her wine, explaining his "NOC" assignments — NOC being short for non-official cover, a term from the movie Mission: Impossible.

Soon after she went to work for him in late 2018, she was told she'd be going to an evening awards ceremony.

"And that's when the whole no-bra-required sort of thing came out," she said.

Chiarelli texted her that she shouldn't wear anything "ho-ish" and, depending on the dress, there would be "no bra required." The complainant provided that text to CBC in September 2019 to help corroborate the story of a job applicant who said Chiarelli had also asked her about not wearing a bra to work events.

"It's pretty gross," she said. "He was pretty blatant about it, too, like he didn't seem to think that there was anything wrong with the comments that he was making. And I think that that comes back down to the fact that I had told him that I was a dancer, so maybe he thought that I just didn't have any morals or ethics."

"Like, he just thought, oh, she's just some loose woman."

In some of the text exchanges in the report's appendix, it appears as if the two are bantering — but the woman said she was trying to use humour to deflect Chiarelli's inappropriate comments.

"[It's like] going back to my dancing career, and you sort of put yourself in a place where it's not really you," she said. "And it's funny how fast you go into this survival mode. And now that I'm not in this situation anymore, looking back, it almost feels like I've woken up from this bad dream."

As a mother, she wanted a job with a pension and benefits, and didn't see why she should quit when she did nothing wrong. The complainant did ask for a transfer to another office, but said that when she brought her concerns to city staff, she was informed there was nothing to be done.

In fact, she said she first heard about the integrity commissioner's power to investigate complaints about the behaviour of councillors from CBC.

She worked for Chiarelli for about six months in 2019, before going on stress leave.

On Wednesday, council will vote on the integrity commissioner's recommended sanctions for Chiarelli, which include withholding some pay, kicking him off committees and taking away his authority to hire staffers and spend his office budget.

Council may also consider barring Chiarelli from returning to city hall, something council in Sarnia, Ont., did after the mayor there was found to have harassed city staff.

The women involved say those steps aren't enough. They want the law changed to allow a councillor who's been found to have engaged in egregious conduct to be removed from office.