The grand chief of the Algonquin Anishinabeg Nation Tribal Council began a hunger strike Monday at midnight, protesting a lack of significant consultation about the future of a building at 100 Wellington St. in downtown Ottawa.

The grand chief of the Algonquin Anishinabeg Nation Tribal Council began a hunger strike Monday at midnight, protesting a lack of significant consultation about the future of a building at 100 Wellington St. in downtown Ottawa.

Verna Polson's hunger strike is happening in a wigwam that was erected by the nation on June 19 in front of the former U.S. embassy opposite Parliament Hill. Polson has been living there since then.

On Monday she spoke with Prime Minister Justin Trudeau in a private meeting.

According to Frankie Cote, a band council member from Kitigan Zibi Anishinabeg in western Quebec and a negotiator for the Indigenous Peoples space, the meeting was unsuccessful and Polson vowed to continue her hunger strike.

Trudeau announced in 2017 that the former embassy will become a national space dedicated to Inuit, Métis and First Nations communities. But the First Nation has said it was not consulted on key aspects of the new space.

The heritage building, which is on Algonquin Anishinabeg territory, sat vacant for nearly two decades after the U.S. embassy moved to its current location on Sussex Drive. Ever since, its future use has been the subject of public debate.

Under former prime minister Jean Chrétien, the building was slated to become a portrait gallery, but that plan was shelved when Stephen Harper came to power.

Last month, Polson said she plans to live in the wigwam until she becomes a partner at 100 Wellington St.

"We're fighting for our rightful place," Polson said. "If we can't come to an agreement or solution for something as small as this, how is Canada going to address bigger Algonquin issues?"

She added that the First Nation was not consulted on the art and displays planned for the space until February and wasn't consulted on the governance of the building until April — and it's still not a full partner. 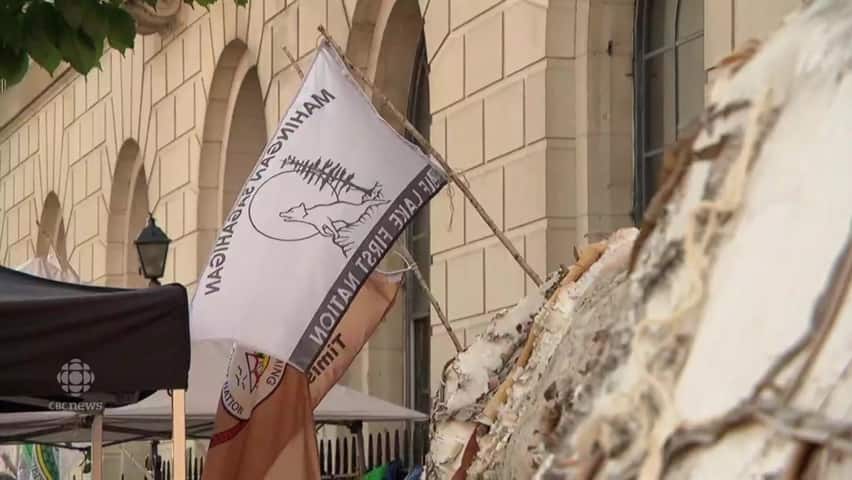 2 years agoVideo
0:35
Norm Odjick, director general of the Algonquin Anishinabeg Nation Tribal Council, says they were not consulted on the future of the building, which stands on traditional Algonquin territory. 0:35

The federal government is not saying whether the Algonquin Anishinabeg Nation should be allowed to enter into full partnership with national Indigenous organizations in managing the space at 100 Wellington St.

A federal spokesperson told CBC News in June that it's up to those groups to decide what to do with the space.

"As 100 Wellington is located on Algonquin traditional territory, the Government of Canada supports the participation of the Algonquin people, including the Algonquin Anishinabeg Nation Tribal Council, in the Indigenous Peoples' Space initiative," a spokesperson for Crown-Indigenous Relations wrote.

With files from Olivia Stefanovich and Radio-Canada