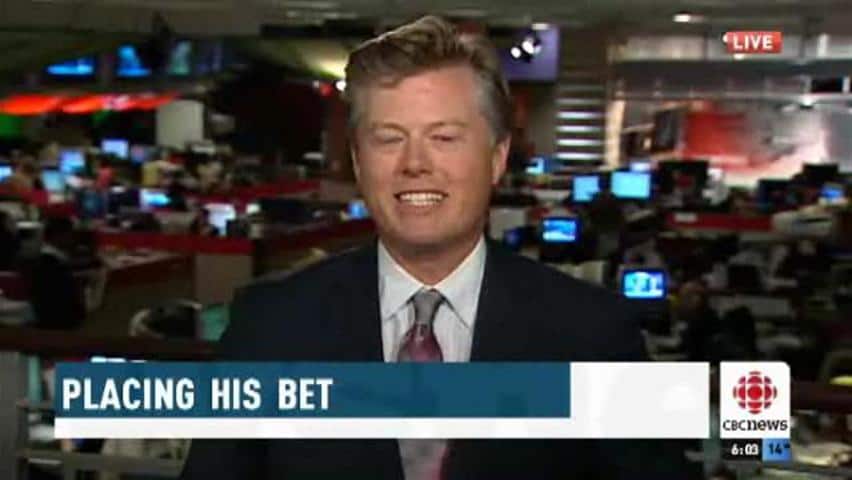 8 years ago
2:03
Mayor Jim Watson has signaled to council his intention to ask the OLG to put out a request for proposals on an Ottawa gaming house. 2:03

Watson, who made the announcement through Twitter, said OLG has not proposed or short-listed a location and said council holds final approval on zoning, which would come after the request-for-proposals process.

A staff report will be discussed on Oct. 2 at the next finance and economic development committee meeting, which will include public delegations and be held in the evening to allow residents to attend.

If council approves the report on Oct. 10, Watson said he will write a letter to OLG to signal the city would be supportive of a gaming facility in principle. While not committing the city, it would allow the OLG to issue a request for proposals from potential operators.

After a preferred proponent has been selected, there will be additional public delegations at a future FEDCO meeting some time in 2013.

The city would still hold the final approval on zoning for a gaming facility.

Watson said Ottawa stands to miss out on vital revenues if it doesn't operate its own gaming operation.

"It's an opportunity for us to start competing with the Gatineau casino," said Watson.

"You can argue whether you like gambling or not... we have gaming in the nation's capital, so let's maximize the dollars for Ottawa taxpayers and repatriate some of those dollars back from Quebec," he said.

Watson said he wants any revenue from the gaming operation to be split equally between infrastructure renewal, job creation and economic development.

Ottawa resident Doug Little is concerned about the direction the city is heading.

The one-time manager of a downtown BIA in Orillia, Ont., Little also promoted the local casino. But he became addicted to gambling, and now warns of the dangers of focusing on easy money.

"[The proposal] doesn't talk in terms of how much money their residents are going to lose, and how much harm is going to be done to families and communities, and individuals within the community," said Little.