Jim Watson is promising to launch an electric bus pilot project, plant trees and open the door to backyard beehives if he's elected as Ottawa's mayor for a third consecutive term.

Jim Watson is promising to launch an electric bus pilot project, plant trees and open the door to backyard beehives if he's elected as Ottawa's mayor for a third consecutive term.

Watson released his environmental platform through a statement on Wednesday.

He pledged to expand the mandate of Hydro Ottawa so that the utility could collaborate with not-for-profit social housing providers to retrofit buildings. He also promised to work with the federal government to look at connecting Ottawa City Hall and the new central library to a district energy system.

As well, Watson said he would introduce a bylaw and zoning review that would allow for urban beehives. Bees across North America have been in decline in recent years.

A number of the initiatives that Watson included in his environmental announcement, however, are not new.

He pointed to the light rail system as the largest green project in the city, as it will take dozens of diesel-powered buses off the the road.

Watson also mentioned the combined sewer storage tunnel being built under the downtown — which will prevent the overflow of raw sewage into the Ottawa River – as a major environmental initiative that started under his watch.

Both these projects, however, have been underway for years.

Watson also promised in his statement he would spend $3 million annually to retrofit city buildings. Speaking to reporters Thursday after casting a ballot in the special advance polls, Watson amended that promise, saying he didn't have the exact figure but that it would be "less than that."

He also vowed to plant 125,000 trees a year over the next term, which is what the city's been doing for the past four years. 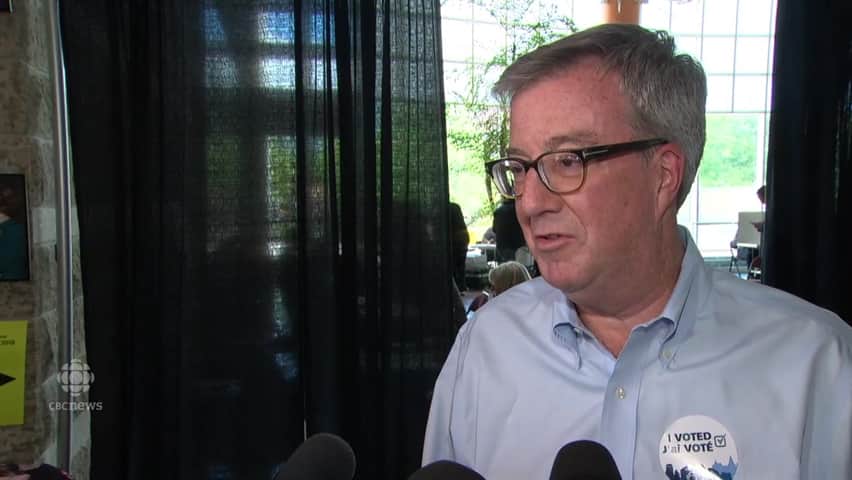 3 years ago
0:31
Jim Watson released his environmental platform on Wednesday. Among the commitments is to test electric buses as a potential replacement for diesel in Ottawa's public transit fleet. 0:31

As for the electric bus pilot project, only a few hours after Watson unveiled his environmental platform, OC Transpo announced it would be hosting a "partial" demonstration of one such bus Friday afternoon.

Watson said he would also look at opportunities for converting waste to energy, such as capturing methane gas from the solid waste collected at the Robert O. Pickard wastewater plant and converting it to energy.

He said he's not considering an incinerator for Ottawa at this time.

With files from Ryan Tumilty