Ottawa police Chief Vern White said he was surprised to receive one of seven new Senate appointments, which he learned of around Christmas.

Chief White to step down from his post Feb. 20, which he has held since May 2007 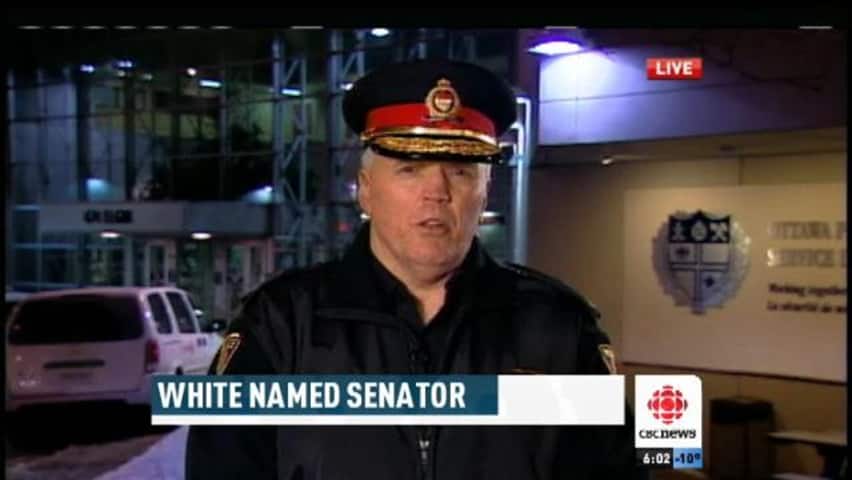 White, who will fill a vacancy in Ontario, has been the city's police chief since May 2007. He was also recently in the running to be the new commissioner of the RCMP and spent about 20 years with that force before joining the Durham then Ottawa police services.

White was first expected to leave the Ottawa post this upcoming May but agreed to extend his contract until 2015, with an option for another two years. He will now step down from his post Feb. 20 before he is officially sworn in as a senator.

In conversation with CBC Radio One's All in a Day, White said it was surprising when he received the call from the prime minister.

"I come from a very humble background," White said, "It's not something most of us ever think about."

He went on to say, in the Senate, he hopes to have the same impact on national security and mental health as he had on the communities where he worked over the past 30 years in policing.

Coun. Eli El-Chantiry and chairman of the police services board said it will be important to replace White from within. Ottawa's mayor added the city will miss White's leadership.

"I want to congratulate Chief White on his appointment and thank him for his service to our City," said Mayor Jim Watson, who is also a member of the police services board.

"Vern has worked tirelessly to improve safety for all of our citizens and this has been reflected in declining crime rates. He is a community builder and I look forward having an Ottawa voice in the Senate of Canada."

The six other senate appointments and the vacancies they fill are JoAnne Buth in Manitoba, Norman Doyle in Newfoundland and Labrador, Ghislain Maltais in Quebec, Dr. Asha Seth in Ontario, Jean-Guy Dagenais in Quebec and Betty Unger in Alberta.

Prime Minister Stephen Harper put out this statement regarding the new appointments.

"I am pleased to announce the addition of seven remarkable Canadians to the Senate of Canada," Harper said in the statement.

"All appointees have distinguished themselves in their fields of endeavour and in their service to fellow citizens."