After 11 gruelling months of COVID-19 threatening and killing residents, the arrival of vaccines and rapid testing at Ottawa's Perley and Rideau Veterans' Health Centre is giving people at the facility some space to grieve — and hope that things will get better, 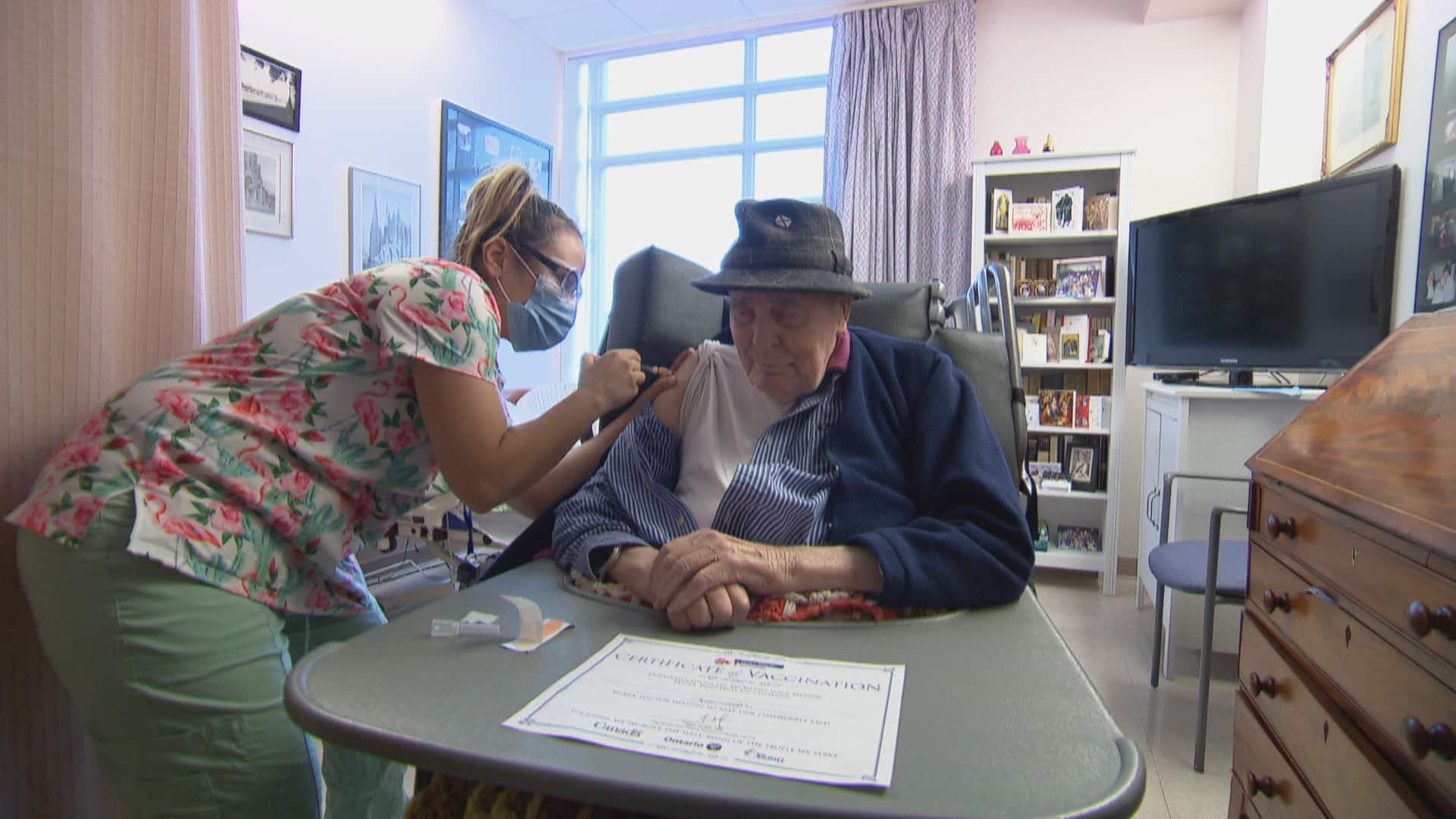 26 days ago
1:28
After nearly a year of dealing with the COVID-19 pandemic, the arrival of vaccines and rapid testing at the Perley and Rideau Veterans’ Health Centre is offering some hope for residents and staff alike. 1:28

After 11 gruelling months of COVID-19 threatening and killing residents, the arrival of vaccines and rapid testing at the Perley and Rideau Veterans' Health Centre is giving people at the facility some space to grieve — and hope that things will get better, if not normal.

COVID-19 has killed thousands inside Ontario nursing homes, including 13 residents at the Perley Rideau. Even now, half of the long-term care homes in Ottawa are officially experiencing outbreaks, but the majority of the cases involve staff members only, workers who will continue to be tested and screened frequently, even after vaccination is complete.

There is definitely something different, and I think some of that is absolutely due to the vaccine.- Mary Boutette, COO

"I think things are still difficult for many of us, but there is definitely something different, and I think some of that is absolutely due to the vaccine. But I also think that we're starting to get our heads around how we actually help people live and to work in a meaningful way in the middle of all of this," said Mary Boutette, chief operating officer at the Perley Rideau.

For the first time since COVID-19 arrived, and under strict protocols, CBC was allowed into the long-term care facility on a day when Perley and Rideau staff were administering the second dose of the vaccine.

"With the vaccine here, it gives us a lot of hope," said registered nurse Chimere Anyali. "Sometimes [the residents] are depressed, but ... we're trying to get the residents up and we're doing the best [we can]."

"I hardly knew it happened," said Silver with a grin.

Down the hall, Laurent Aubin, who served in the Canadian navy for 20 years, waited by his door for his second dose.

Aubin moved into the Perley Rideau about a year ago, not long before the pandemic hit. His world quickly shrank, with restrictions on his movement both inside and outside the residence.

"You kind of get used to it," said Aubin. "I stay in my room most of the time. I exercise. I read. Every day when I get up I say, 'This is going to the day that we're going to be able to go out into the community and keep on living.'"

'Everybody needs a holiday'

This facility is unique. Initially built to care for Canada's veterans and still funded in small part by Veterans Affairs Canada, it has spacious halls, private rooms, art and music therapists on staff, daily mass, a pub and a gift shop.

Since April, positive cases among residents and staff threw the facility into lockdown four times.

With the vaccine campaign almost complete and continuing vigilance when it comes to precautions such as frequent testing and personal protective equipment, administrators now want to focus on ramping up activities and giving staff a break.

"So how do we reintroduce, in a safe way, things like programming? How do we bring music back? How do we look at running activities in a creative, but different way for our staff? How do we continue to allow people to have time off? Everybody needs a holiday," said Boutette.

Approximately 1,000 people currently sit on the home's waiting list, with a current wait time of three years, according to the Champlain Local Integrated Health Network, which manages the long-term care system in Ottawa.

"Right now we have approximately 100 empty beds," said Boutette. "We're currently now admitting somewhere in the neighborhood of 10 to 15 residents every week."

The facility has set aside a unit where new residents isolate for 14 days before joining the Perley Rideau community.

There are still active COVID-19 outbreaks in more than 220 long-term care homes in Ontario, and even though the province's priority is vaccinating the residents of those homes, it's expected that cases will continue to spread in the months ahead until there's widespread immunity.

The pandemic has exposed unsettling conditions for nursing home residents and workers, and has drawn attention to the whole sector, turning off potential workers.

"I think absolutely the attention that's placed on long-term care is critical to some system changes that are required to move forward with caring for seniors in the future," said Jen Plant, director of clinical practice at Perley Rideau.

"It feels good knowing that you're making a difference and people's lives," said Edwards, who hasn't decided whether she'll seek a hospital or nursing home job. "I'm not sure yet. It's my first day, so we'll see how it ends up."