Vanier residents say they are frustrated with changes OC Transpo is bringing to the popular route 12 bus next month.

Starting in September, the route 12 bus will no longer travel through downtown

Vanier residents say they are frustrated with changes OC Transpo is bringing to the popular route 12 bus next month.

​The bus normally runs from Blair station to Montreal Road and Rideau Street, then along Wellington Street and up Bank Street to Slater Street.

Starting Sept. 2, the bus will no longer go through the downtown core.

Instead, it will stop at Confederation Square, where the National War Memorial is located.

To continue downtown, transit riders will have to get off at the Rideau Centre and transfer over to the LRT once that is in place, or get off the bus and walk.

'It doesn't make any sense'

Sam Boswell has lived in Vanier for eight years and commutes downtown for work.

She said she's upset about the upcoming change to the bus route that's already plagued with problems such as delays and overcrowded or cancelled buses.

This is the final straw in a whole series of failing the community.- Sam Boswell, Vanier resident

It will likely be inconvenient for her as an able bodied transit rider, but anyone travelling with children or in a wheelchair will be even more inconvenienced, she said.

The change to route 12 is another incident of Vanier being treated unfairly, she suggested.

"If this was the only thing OC Transpo had done to Vanier, I might be willing to be a bit more forgiving, but this is the final straw in a whole series of failing the community," Boswell said.

The "salt in the wound" was discovering OC Transpo is keeping route 6 as it is, going right down to Bank Street, she added.

"So you're asking the marginalized, working poor neighbourhood to be inconvenienced, to take extra time to get to their destination," she said.

"You're not asking the wealthy neighbourhood that actually has high car ownership." 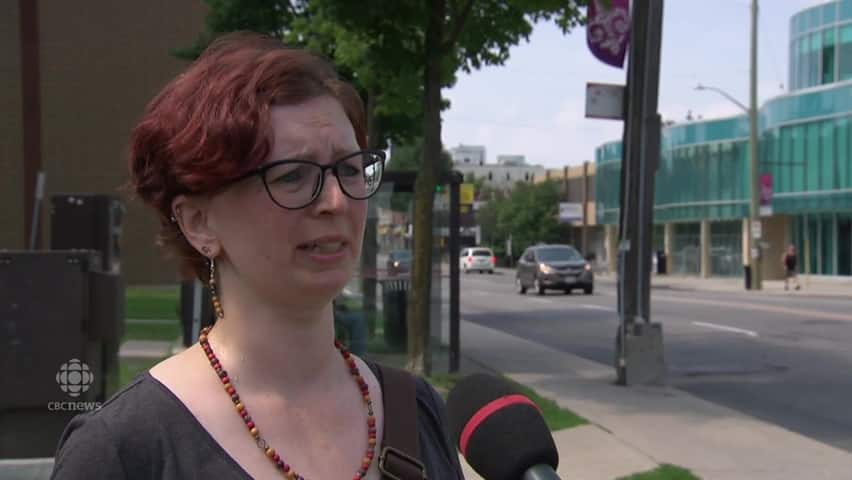 3 years ago
0:52
Vanier residents say they are frustrated the route 12 bus will end at the National War Memorial in September, and will no longer go through the downtown core. 0:52

Changes ahead of LRT

He said sending the bus through the downtown core leads to delays.

"That bus will not have to go into the downtown area, along Wellington and Bank where currently it accumulates its longest delays because of other traffic and other travelling conditions," Pepper said.

"That sets off a chain of events that can often make the route become quite unreliable in its over 90 trips a day."

"The thing that will become more guaranteed for everyone is the reliability of the travel inside and outside of downtown," he said.

"The train will be more frequent, so that will save time, it will be more reliable and we won't have to compete with 300 buses an hour downtown."

OC Transpo is making the change now, Pepper said, so that riders can get used to it before light rail trains are on the track.

He added that OC Transpo is implementing route changes, like the one with route 12, in a "measured and planned way" leading up to when the LRT is scheduled to open later this year.

Trevor Haché​, who lived in Vanier when he first moved to Ottawa and is vice president of the Healthy Transportation Coalition, echoed Boswell's suggestion that OC Transpo isn't properly serving Vanier residents.

"Vanier has been totally overlooked with regards to the light rail transit system," Haché said.

"The light rail stations, none of them are going to be located in Vanier. The bus service in Vanier is already really bad."

A lot of the city's plans when light rail comes into effect is to have buses end at light rail stations, but a lot of people are relying on those bus routes to take them further, he said.

"Unfortunately it seems like a lot of concerns are falling on deaf ears."

Coun. Mathieu Fleury told CBC that although the back to school period often means changes to bus routes, the changes coming to this bus route in his ward was surprising.

"We were surprised … by the fact that it didn't go past the Rideau Centre. It's such an important corridor for us along Montreal Road and Rideau Street where a lot of the users go into Centretown," he said.

Fleury added that he's in contact with OC Transpo's director and expects an answer later this week.