Intricate artworks on an un-eggs-pected canvas

At just six years old, Nataliya Chabanyuk learned the intricate art of pysanky. Now she's passing the Easter tradition on to her own daughter.

Ukrainian tradition of egg decorating passed on through generations

Growing up in western Ukraine, her mother and grandmother taught her how to decorate eggs using hot wax, coloured dyes and an open flame — an art form passed down over generations.

It's something which keeps you to your roots.- Nataliya  Chabanyuk

Pysanky — or pysanka if there's just one egg — comes from the Ukrainian word pysaty, which means 'to write.'

"So we're actually not drawing the eggs, we're writing on them," Chabanyuk explained.

Now 41 and with her own family in Ottawa, Chabanyuk has shared the skill with her daughter, Katia Abramovich-Chabanyuk.

"It's something which keeps you to your roots," Chabanyuk said. "I think it's quite important for people, especially children, to be proud of what they make and to know where they're coming from."

Chabanyuk teaches pysanky workshops and encourages kids and their parents to attend.

Katia is 10 now, and has already been honing her craft for five years.

"When I tried my first one it was like scribbles, and then I started doing it really good," she said.

'Time stops around you'

Chabanyuk said the egg-decorating tradition dates back thousands of years, and is traditionally done around Easter to represent new life in the springtime. 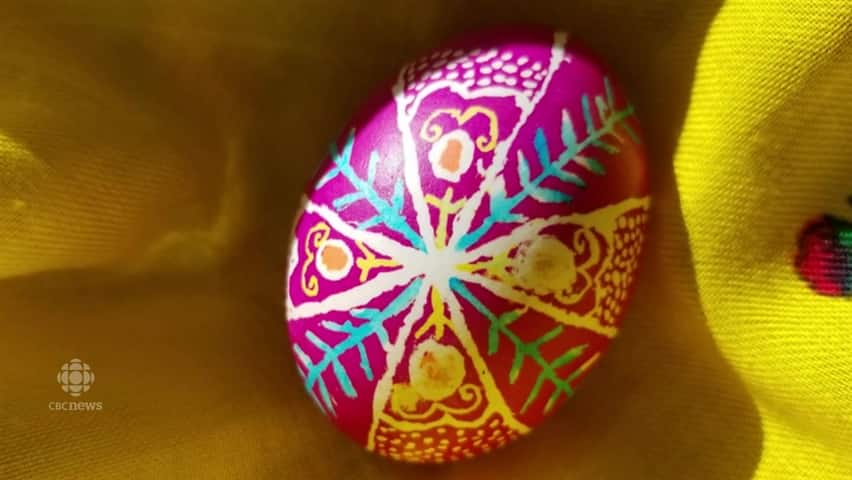 Timelapse: Watch an egg transform in a Ukrainian tradition

It's common for people to keep the decorated eggs for generations. The oldest one Chabanyuk has seen was more than 100 years old.

Each egg has a story to tell and can take hours to perfect.

Depending on the intricacy of the design, Chabanyuk said she's spent three hours or more on a single egg, but she doesn't mind.

"When you're working and concentrated on your little object, which is fragile in your hands, and you`re decorating that and you're making that symbol of life ... time stops around you," she said.

Using a wax-resistant technique, you add the hot wax where you want to see the colour, adding dye from light to dark as you go.

I think the most precious is when they have this twinkle in their eyes like, 'Oh my god, look at those colours!'- Nataliya  Chabanyuk

Holding the writing tool against the flame, you heat up the funnel, then scrape the wax, melting it and adding it to the egg.

Chabanyuk uses a combination of both synthetic and natural dyes made from beets, onion skins and other plants or vegetables.

"For busy moms, what we can do is ... make one colour, put the egg into the dye bath and come back to it later when the kids are in bed," she said.

When you're ready to remove the wax, Chabanyuk recommends putting your egg in the oven so the wax can melt away.

Once it is removed, you're left with an intricate —  and extremely delicate — piece of art.

Ukrainian families often put them out on display. Chabanyuk said she's most proud of the eggs her children have made.

"I think the most precious is when they have this twinkle in their eyes like, 'Oh my God, look at those colours!'"