Seven members of a Gatineau, Que., family, including a pregnant woman and three small children, fell ill on Sunday while setting up a large aquarium. They blame toxins released by coral for landing them in hospital and driving them from their home.

Zoanthid coral is a popular feature of saltwater aquariums, but can release a dangerous toxin

Seven members of a family are recovering from illness they say was caused by exposure to a toxic coral in their home aquarium.

Jason Laframboise, 31, bought the aquarium second-hand from a business where it had been on display and transported it with its contents to his home in Gatineau, Que., on Sunday.

Immediately after transferring some Australian Zoanthid corals, all seven people in the house began to feel sick.

"We all started sneezing within minutes. We were having chest pains, problems breathing," Laframboise said. "So after about three to four minutes of symptoms we came out. We called poison control. And later in hospital [we had] fevers, shaking, a bit of vomiting."

Those who fell ill included Laframboise's 16-month-old nephew, his five-year-old son and three-year-old daughter, as well as his wife, Cassandra Findlay, who is six months pregnant.

Upon learning of the family's symptoms, the Quebec Poison Control Centre sent them an email to present to a triage nurse at the Montfort Hospital where they sought treatment. It warned that Zoanthid coral could contain a substance called palytoxin, which when ingested could cause symptoms from vomiting and seizures to respiratory failure resulting in death.

Laframboise believes the family was poisoned by breathing the toxin through the air, which the poison control centre suggested would likely lead to milder symptoms.

Laframboise stayed overnight in hospital and was given IV fluids and antibiotics. His wife returned to the hospital on Tuesday for further examination. 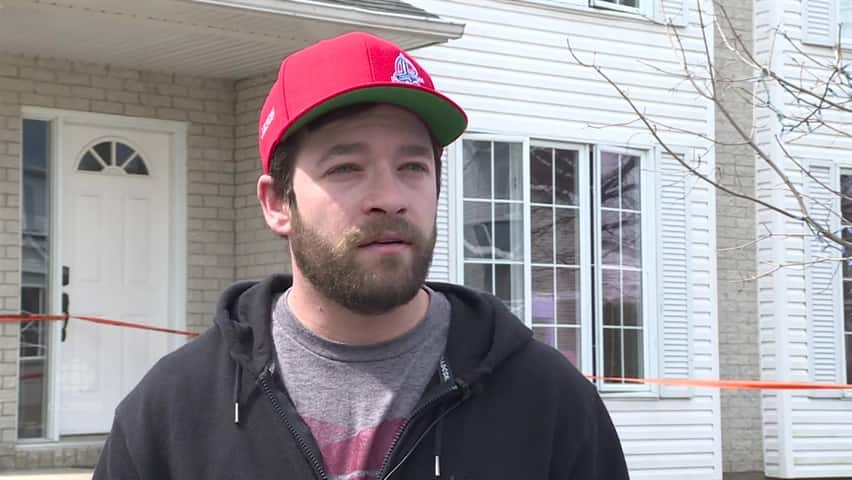 5 years agoVideo
0:35
Jason Laframboise says he and six other family members began suffering severe symptoms after he transferred coral into his new aquarium. 0:35

While the family members worry about their health, including that of their unborn child, they're living without their belongings at the home of a family member.

They're afraid to return home for fear the building is still contaminated with the toxin.

Initially, they were not offered help from authorities to clean up the property or even inspect the house — where they normally operate a home daycare.

"I've called over 40 companies and nobody can do it in this region," said Laframboise.

The family was also informed that a hazardous materials team would not be called to respond, although police have cordoned off the house with orange tape.

​Late Tuesday evening, Laframboise met with Gatineau's fire chief and police chief, who have agreed to help him with the cleanup so the family can return home.

Laframboise said he has been told multiple provincial government departments are going to be involved.

The man who sold Laframboise the aquarium, Alex Bordeu, told CBC News it was purchased at Marinescape, a saltwater aquarium retailer on Carling Avenue in Ottawa. He said that as the person in charge of maintaining the aquarium during its four years on display in his own office, he'd handled its contents safely many times.

Live coral is a very popular feature of saltwater aquariums, according to Marinescape co-owner Keith Hamilton.

"There are very few of them that wouldn't have Zoanthids in them, because of their variety and colour," he said.

Hamilton said the recommended protocol for dealing with the coral involves wearing gloves and glasses, although he's frequently handled the creatures without using those precautions himself.

A Toronto coral grower advised caution, calling Zoanthid coral "one of the most toxic things in the aquarium industry" because scrubbing or hot water can cause the coral to release toxins that become airborne.

"I've heard of this happening once in a blue moon. Someone cleans or scrubs a tank and then ends up inhaling some of it," said Marcello Portillo, who runs Fragbox Corals.

Portillo said he's never heard of anyone becoming seriously ill, and he's never had a problem himself despite working with the corals for many hours each day.

A spokesperson for Health Canada told CBC it had no reported incidents of poisoning by Zoanthid corals and that the government does not restrict their sale or handling.

The Canadian Food Inspection Agency, which requires import permits for some aquatic animals susceptible to certain diseases, told CBC News it does not require permits for any coral species.

As for Laframboise, he said he was unaware of the risk despite his experience as an aquarium hobbyist, and he's anxious to spare others the hardship he's enduring.

"If people buy them, they should buy them with care, or be properly informed."