The charity arm of the Toronto Blue Jays has donated $210,000 to the construction of Ottawa's first wheelchair-accessible baseball diamond. 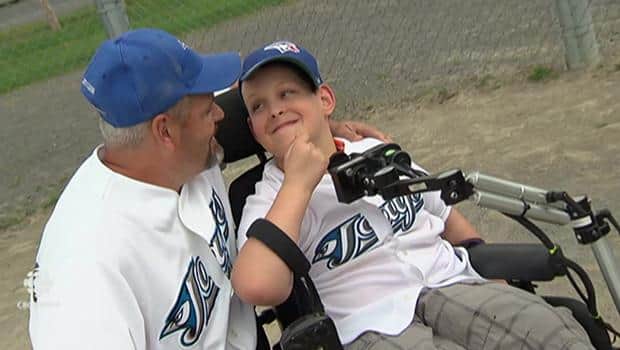 Miracle League of Ottawa gets help from Blue Jays

The charity arm of the Toronto Blue Jays has donated $210,000 towards an effort to build Ottawa’s first wheelchair-accessible baseball diamond for children with special needs.

"When you're looking at six figures it really demonstrates that this is a very valuable, important project," he said.

The project began as an idea from Bryce Desrochers, an 11-year-old boy from Ottawa who has cerebral palsy.

It has now expanded from an accessible baseball diamond to include a renovation of the existing field house to build accessible washrooms.

"I just can't wait for it to be built because then I can go faster than I can right now," Desrochers said Thursday.

"I've learned that most dreams, if you say it out… they'll usually come true."

This donation means an additional $386,000 still has to be raised to complete the baseball field, playground and field house with accessible washrooms.

The City of Ottawa also plans to match donations to the Miracle League of Ottawa dollar for dollar.

"As a family, we are convinced Bryce's dream will soon be a reality," said Rolly Desrochers, Bryce's father. "We know that Bryce's dream has captivated people across the country."

The diamond will be located at Notre-Dame des Champs Park at 3659 Navan Rd. in the east Ottawa suburb of Orleans.

The Miracle League of Ottawa said it hopes to have the field ready for Canada Day 2015.