The owner of an Arnprior, Ont., company that manufactures special foundations for buildings in the far north says the technology could be a solution for homeowners here facing repeated flooding.

An Arnprior, Ont., company that manufactures special foundations for buildings in the far north says the technology could be a solution for homeowners facing repeated flooding here.

Until now, Triodetic's "multipoint foundation" — a foundation made of interlocking tubes arranged in a series of triangles — has mainly been used by governments and institutions building or repairing structures on muskeg, snow, or soil that's thawing in harsh climates.

The triangles spread the weight of the building over a wide area, permitting construction where poor soil conditions have caused other buildings to sag, collapse or shift.

"With all we've observed going on eastern Canada, with all the flooding, we thought it would be perfect," said Triodetic's CEO, David Watson.

"This is a perfect solution where somebody fell in love with the land [but] is tired of the flooding — they can now elevate their building above the flooding and keep that perfect piece of land that they've established as a family home."

The design that inspired Triodetic's foundations was developed by the Fentiman family in Ottawa in the 1950s.

In 1954, Art Fentiman, then an Ottawa window and door manufacturer, approached the Royal Canadian Air Force with a hangar door design that was both strong enough for large aircraft facilities but also light enough to be transported by air to the north.

After a few failed attempts, Fentiman came up with a reconfigurable tube-and-hub design that's now at the core of Triodetic's product line. 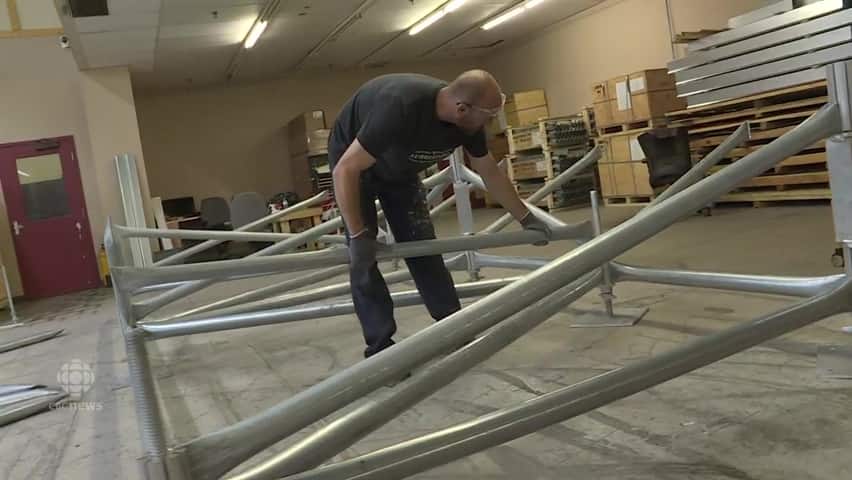 This foundation design might stop your home from flooding

Multipoint foundations are in use in northern Canada, Alaska, Norway and Russia, where shifting and thawing land makes conventional concrete footings unsuitable.

They're also used to rapidly build enclosures for mining operations all over north and south America.

Watson said the aluminum or galvanized tube structure is impervious to water and can elevate a multi-storey home up to four metres off the ground.

For that reason, gas exploration companies in Louisiana, where expensive and deep pilings are normally the approach, have also shown an interest in the Ottawa Valley technology.

Watson acknowledged, however, that the local residential market wasn't an area his company had explored until recently.

And with the price starting at about $15 per square foot, a multipoint foundation may not be the cheapest solution for flood-prone homes.

For a home with a 1,500-square-foot footprint, such a foundation would come to about $22,000 — and that's before hiring a contractor to lift the existing building.

Anything that would provide them with a greater measure of security would be worth looking at.- Dave Foster, Canadian Homebuilder's Association

There's also another issue: if you go with this unconventional approach, you can't have a basement.

Even so, the foundations "might be an ideal approach" for homes where flooding is an annual problem, said Dave Foster with the Canadian Homebuilder's Association.

"For the sake of the poor folks that have gone through this every two or three [years], which is horrible, anything that would provide them with a greater measure of security would be worth looking at," Foster said.

At the Rideau Valley Conservation Authority, Terry Davidson, director of engineering and regulations, said elevating houses with floodproof foundations could be a popular solution in this area.

"I don't see why it wouldn't," Davidson said.