Officials keeping a close eye on the Ottawa River are warning more water could be on the way due to the melting snowpack.

Officials keeping a close eye on the Ottawa River say the flood risk remains significant due to the melting snowpack.

This spring could bring a one-two punch to the river basin — initial April flooding caused by rain and snow melt in the southern section, followed by a second wave of water once the snow finally melts in northern Quebec near communities including Temiskaming and Rouyn-Noranda.

It's what happened in 2017, the last time devastating floods hit the Ottawa-Gatineau region.

"We're looking at levels beginning to rise as tributaries in the Pembroke area begin to sharply respond. They've really come on in terms of snow melt runoff over the last day, and that water is going to begin to arrive down here in the Ottawa area," said Michael Sarich, a senior regulation engineer with the Ottawa River Regulation Secretariat, on CBC Radio's Ottawa Morning on Tuesday.

"Where they peak, it's difficult [to say] … but we can see the Petawawa [area] is probably going to be a historic maximum, so if that holds in other tributaries, then the concern is higher.

"At this point we don't see it passing 2017 [levels], but for last night's forecast I put levels in that were similar to 2017. But we'll have to monitor conditions today and how much rainfall we receive overnight to really get a better handle on where we're going."

Hydro braces for next wave

River levels have already surpassed those recorded during the first wave of flooding in April  2017, when the river reached levels among the highest in 100 years, Sarich said.

If the forecast calls for more rain over the next few weeks, that could spell trouble, he said.

"It's been a significant event already. And so, if the timing is more water on top of already high conditions, there's a significant risk. 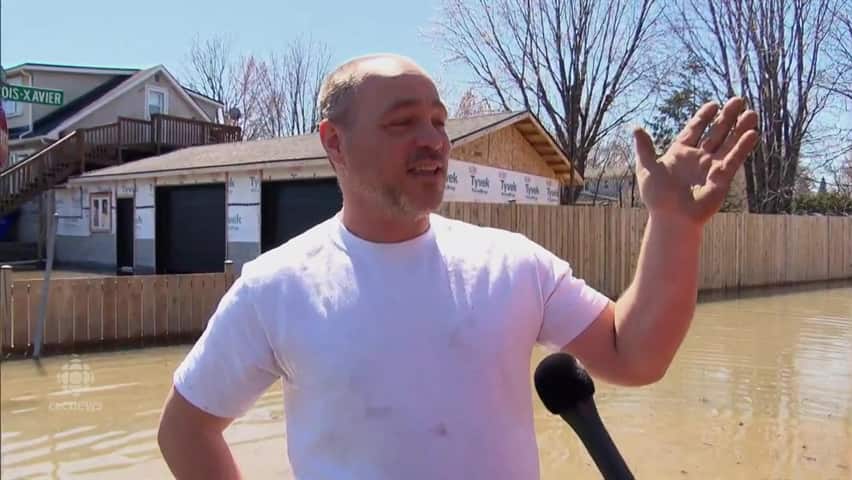 The toll of flooding in Pointe-Gatineau

2 years agoVideo
1:19
Pat Fauteux says many of his relatives' homes have been demolished because of flood damage. 1:19

Hydro-Québec is reporting its basins in the north have a lot of capacity to handle the northern melt while giving southern river levels time to recede — but all bets are off if there's heavy rain or extremely warm temperatures.

"There's a lot of snow up north," said Hugo Sansoucy, Hydro-Québec's head of planning and production.

We'll be looking at the weather forecast every day.- Hugo Sansocy , Hydro-Québec

"We'll be looking at the weather forecast every day."

In 2017, the second wave of flooding was made all the more catastrophic by an incredible 100 millimetres of rain over just a few days.

After those floods, Hydro-Québec added new technology that allows for real-time assessments of the speed of the northern snow melt.

That will help with forecasting, but Sansoucy said temperatures and rainfall levels are hard to predict far in advance.

The area isn't in the clear yet.

Another 15 to 50 millimetres of rain is expected across parts of the Ottawa River basin Tuesday and Wednesday, according to South Nation Conservation (SNC).

Rising temperatures and some remaining snowpack in areas north of Ottawa are also contributing to rising river levels, the organization said.

Water levels in the Constance Bay, Britannia, and Cumberland are expected to rise between 0.4 and 0.6 metres over the next four days, while levels near Clarence-Rockland will likely rise quickly before peaking next Monday, SNC said.

Homeowners brace for the worst

That means homeowners who survived the 2017 flood can't lower their guards just yet.

"It's supposed to be stable right now," said Pointe-Gatineau resident Jonathan Brennan, whose neighbourhood saw dozens of homes destroyed in 2017.

His own home was badly flooded, but he stayed because the compensation he'd receive for leaving wouldn't have covered his mortgage.

So far this year, the water hasn't quite reached his home. But to be safe, he's moved all his furniture to the second floor.

Mayor Maxime Pedneaud-Jobin showed up in Pointe-Gatineau Monday to evaluate the sandbagging operation.

He said no one is going to relax until they know what will happen to all that water still to come down the river.

"We don't know much, and it can change quickly," said Pedneaud-Jobin.

"It's still a possibility that we would have a second wave. So until we're 100 percent sure the situation is over, we're going to keep all those sandbags here and be ready."

As of Tuesday morning, 184 people had registered with the city's disaster assistance centre.